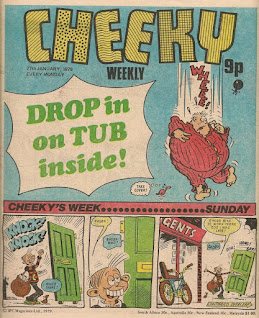 Our chubby chum Tub gets to appear on two covers this week. Not only is the rotund rascal the subject of the main pic on Cheeky Weekly's front page, but he makes a return to The Mystery Comic's front page after having been bumped from the perplexing publication by the Snap Game in the two previous issues. Readers might have expected the image of Tub on Cheeky Weekly's cover, depicting him clad in his jim-jams and plummeting earthward, to have some connection with his strip in this week's issue.  However, readers are left puzzling over the strange cover scene, as the image is lifted from a panel in the Tub strip that will appear in 2 weeks' time. Maybe the absence of Tub from the comic for 2 weeks resulted in Tub's asynchronous cover appearance.

Beneath Tub's dramatic descent, Mike Lacey draws his first What A Cheek cover strip. Cheeky and the Knock-Knock Door are enjoying a joke as the toothy funster commences his usual Sunday paper round, entirely unaware that they are about to be squashed by their corpulent co-star.


We enjoy a rare glimpse chez Lily on page 2. Lily's attire and the way Milkie is hanging around her front door on a Sunday (a day when milkmen don't even deliver) reminds me of this…

6 Million Dollar Gran is back to a full 3 pages, after having been reduced to a 2 page story in last week's issue. Gran and the Potts kids pay a visit to the flower show, and yes that familiar old plot gets yet another airing - a thief steals the trophy. Order is soon restored when Gran lassos the fleeing felon with the Mayor's chain of office (almost strangling said dignitary in the process).


There's some nice feline fun by Terry Bave in the Calculator Kid story. 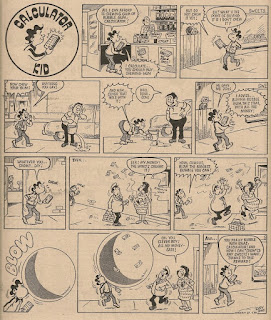 On the cover of The Mystery Comic, this week's double cover star Tub is involved in a snowy tale. Maybe this story was intended for last week's snow-themed issue, in which the hapless heavyweight's story was one of the few not to participate in the gelid japes. This week's Elephant on the Run episode finds our pachyderm pal and his plastic-clad pursuer in a mountain ski-ing resort - another story that would have been ideal for last week's snow issue, in which Elephant's strip was among the few that were conspicuously free of the white stuff.

Tub's is not the only strip returning to The Mystery Comic after a two week break. The exasperated father and inquisitive offspring team from Why, Dad, Why? are also back. However, the snap game intrudes upon the Mystery Comic for a third week, so this time Mustapha Million's 2 page story is missing.

In the course of the Disaster Des strip we learn that US President Jimmy Carter is a reader of Cheeky Weekly.


Paddywack, who has painted himself into a corner on this week's Pin-Up Pal poster, brings the issue to a close.

Mike Lacey provides all 10 Cheeky's Week elements in this issue, plus his regular strip Disaster Des. A Herculean effort, yet not quite equalling the 13 elements in total that he contributed to the 04 November 1978 comic.