A new puzzle feature began in the 04 December 1982 issue of Whoopee!. This new series of perplexing posers went under the name of Quizmaster, and characters from the roster of Whoopee! stars would take turns at being the titular question-setter. The series was drawn by Roy Mitchell, who signed himself 'Mitch', and would include a trademark mushroom/toadstool thing each week (which Mitch also incorporated into his Rambling Rhymes artwork in the same comic).

The host of the first Quizmaster was Cheeky Weekly's Calculator Kid, and in the 19 March 1983 issue Cheeky got his chance at setting readers some brain teasers. 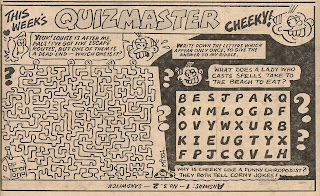