Cheeky Weekly's brief existence on the newsagents' shelves spanned 3 Christmases; those of 1977, 1978 and 1979. Sadly, however, industrial action prevented publication of the Christmas 1978 issue, although much of the work prepared for that issue eventually surfaced in one form or another.

Thus, there were only ever 2 in-house ads promoting forthcoming Cheeky Christmas fun. The first appeared on page 30 of Cheeky Weekly dated 24 December 1977 (the full-blown Christmas issue appeared a week later, cover dated 31 December 1977 and with an official on-sale date of 22 December). 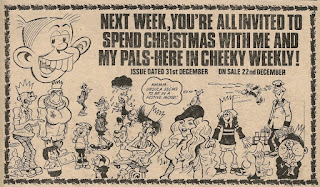 The artwork for this half-page ad is dominated by a drawing that was utilised a number of times in the comic, and is what I refer to as the 'standard Cheeky face' (as seen at the top of this blog). The toothy funster invites readers to spend Christmas with him and his 'pals' (a rather quaint, archaic word which by the late 70s' was only ever used in comics).

Below our hero's grinning mug, and surrounded by a holly border, a random cast of Cheeky Weekly characters have been assembled by some deft cut-and-paste action. To enhance the seasonal effect, certain of Cheeky's co-stars are sporting pencilled-in festive headgear. Snail bravely risks a sarky remark about Ursula.

Among the milling throng were 2 characters who actually didn't appear in the following week's comic, Doodle Doug and Milkie. The less-than-seasonal evil leer that Doug is displaying here is a possible reason for his exclusion from the festive issue.

Two years later, and sharing the page with an ad for the 1980 Cheeky Annual, this half-pager appeared in Cheeky Weekly dated 22 December 1979;


No doubt due to budgetary constraints, the cast list for this ad is pared down to Cheeky and Snail, and no festive border is present. The toothy funster models a rakish topper-and-scarf combination, as Snail hitches a ride. Us 'pals' are exhorted not to miss the seasonal issue, and Snail is on-message with his advice to order a copy. Prospective purchasers are promised a comic 'full of festive fun'.
Posted by Niblet at 16:01