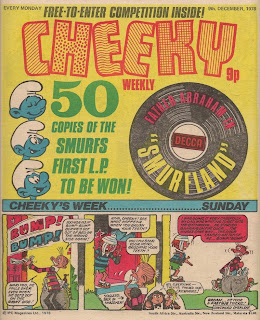 For the second week the comic is afflicted by an industrial dispute and as a consequence is reduced to 28 pages from the normal 32. There's no mention of this fact on the cover which (also for the second week running) leads with news of a competition inside. This time the lucky winners can bag a copy of The Smurfs' new LP, Father Abraham in Smurfland.

Below the exciting news for fans of the diminutive blue songsters, Cheeky has a Sunday morning encounter with Bump-Bump Bernie. Also seen in the strip are comedy double act (Syd) Little and (Eddie) Large, who are currently attempting the unenviable task of filling the hole left in the BBC schedules by the recent defection of comedy legends Morecambe and Wise to ITV.

Unlike last week, when the reduced page count resulted in the loss of 2 Cheeky's Week elements (plus 6 Million Dollar Gran), this week's 28 pager does feature a full Cheeky's Week. However, the What did YOU do today? diary section, which has been present on all the introductory 'weekday' elements of the Cheeky's Week pages since the 30 September 1978 issue (with the exception of Saturday in the 14 October 1978 comic), is missing from the foot of the Sunday page. There is no evidence of page resizing so it seems the artwork was prepared without leaving space for the WDYDT area. Maybe the page was drawn before the introduction of WDYDT, but was pressed into use in the current issue by the exigencies of the industrial dispute. 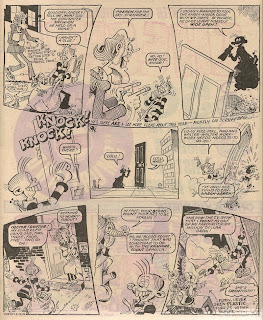 Even the mighty 6 Million Dollar Gran cannot withstand the power of the Trade Unions, so for the second week the synthetic senior citizen is a casualty of the reduced page count, despite the Sunday page showing the toothy funster's anticipatory dash to the TV. 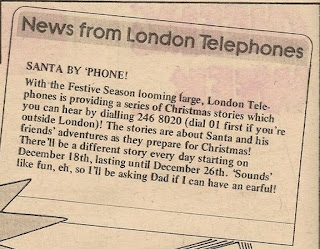 As Christmas approaches, the What's New, Kids page carries news of an innovative development in home entertainment, available to those with access to the appropriate technology. Yes, it's London Telephones' recorded Christmas stories, an expansion of their existing Dial-A-Disc service. Don't forget to dial 01 if you're outside London. Unfortunately, the technology is still a little primitive, and as the stories are recorded on a tape loop, you'll probably dial in part-way through a Christmas tale, finding you have to listen to the end before reaching the beginning. But think of the possibilities - one day, there will be a network of Dial-A-Disc machines, each loaded with a tape loop containing a recording of someone relating a particular fact. By simply looking up a question in a telephone directory to find the telephone number of the machine carrying the answer, we will be able to satisfy our curiosity on any number of obscure topics. They'll probably call this information distribution system the TeleWeb, or InterPhone or PhoneNet or something…

On Tuesday Cheeky meets Ursula, making her first post-Saturday Morning Pictures appearance. No longer an usherette, Ursula tells Cheeky she has secured a job as a bank security guard, a position for which she is clearly eminently suitable.

Page 16 is the home of the Smurfs competition announced on the cover. 6 seemingly-identical pictures of the little blue elves are on display but apparently only two are identical. Readers are invited to send a postcard containing their choice of twins. Winners will receive a copy of The Smurfs' latest LP, Father Abraham in Smurfland.

This is the second Smurf competition to feature in Cheeky Weekly; the first was just 3 months ago in the 09 September 1978 issue (and a list of fortunate winners of that earlier competition is printed on page 24 of this week's comic). That issue had sporadic Smurf content throughout Cheeky's Week, whereas this week's Cheeky pages are entirely Smurf-free.

On Thursday, Spiv finally finds a punter gullible enough to purchase the old banger he's been trying to flog since the 02 September 1978 comic. Posh Claude is horrified to discover that it's his dad who has been lumbered with the smoking wreck.

In the final panel of the Thursday page, Cheeky announces that Skateboard Squad will follow, but in fact it's Disaster Des who appears on the next page. The Squad actually arrive one page later. A full roster of Mystery Comic features are present this issue but, in a kind of Brundlefly co-mingling of comic DNA, 2 features which are actually part of Cheeky Weekly (The Smurfs competition and Thursday) are caught up within the pages of the mysterious publication, this week's mutated comic no doubt resulting from the effects of industrial unrest.

The Pin-Up Pal poster returns to the comic for the first time since 23 September 1978. This week's comic rounds off with a poster of Krazy Town's silly snapper, Flash Harry.

Despite the note at the bottom of the second page of this week's Laugh and Learn strip reading "There'll be another feast of fun and facts soon pals!", this is actually the final time the feature will appear.


New features commencing this week are Friends of Cheeky Chit-Chat (readers' letters) and The Burpo Special, the terrible toddler's own feature in which he interviews characters from the Cheeky's Week supporting cast. The subject of the first Burpo Special is Lily Pop who, we learn on the Chit-Chat page, is the character from the cast of Cheeky's pals who is most popular with the readers.

Although the comic is reduced to 28 pages again this week, at least all those pages are used. There is no 'feature omitted' blank page as there was in the previous issue. Like last week, however, there are no page numbers and despite the reduced page count the cover price remains the usual 9p.