The toothy funster had a single encounter with Commissionaire's Grandson, in Cheeky Weekly dated 19 August 1978. This was the issue in which Cheeky was given a glimpse of his life as a senior citizen in the year 2038, courtesy of Crystal Belle's mystic powers. Evidently our grinning pal is a lifelong movie enthusiast as his older self is still attending film shows on Saturday morning. 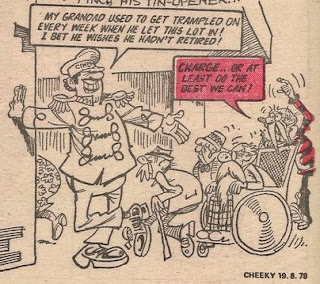 As we know, Commissionaire's appearances were linked to the Saturday morning picture show that readers of Cheeky Weekly witnessed in the first 59 issues of the comic. The final picture show to be featured in Cheeky Weekly was in the 02 December 1978 issue. The fact that Ursula the erstwhile usherette tells Cheeky in the following issue that she has a new job as a security guard suggests that the cinema had closed (a fate that increasingly befell picture-palaces during the 70s, as cinema attendance plunged while TV ownership boomed). However, Comissionaire's Grandson's comments indicate only that his grandfather retired - whether the grandson is working at the same cinema is open to conjecture.
Posted by Niblet at 15:08