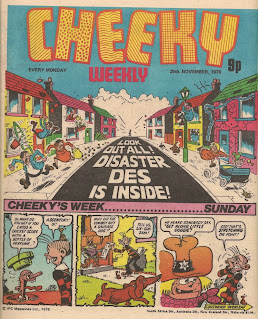 A nice Mike Lacey main cover pic promoting Mystery Comic feature Disaster Des makes this a particularly appealing front page. Unlike most of the main cover features of late, which have been lifted from the interior of the comic, this one has been specially drawn. There's some nice detail - the baby being bounced out of the pram, the mouse being the first out of Doomsville. In a somewhat calmer atmosphere, the Cheeky's Week…Sunday strip sees the toothy funster sharing a joke with his subterranean stooge Manhole Man and a very tired wild west gag, that has probably been around since Wyatt Earp picked up his first spud gun, with Six-Gun Sam. The scriptwriter takes a liberty with the title of the folk song referenced in order to make the gag work.

That familiar Cheeky Weekly plot in which a crook makes off with the takings is used again this week - twice. 6 Million Dollar Gran foils a theft from a musical instrument shop's till (maybe this adventure would have better suited last week's issue in which jokes relating to music were in evidence across the comic), and in the Mystery Comic, our portly pal Tub foils a criminal who attempts to steal the fares from the bus company office.

In a particularly crime-ridden issue, Skateboard Squad are in hot pursuit of a shoplifter who has purloined some toys. By means of a cunning ruse, the miscreant continues his getaway using the Squad's boards but, employing the discarded toys as an alternative mode of transport, the intrepid trio bring the felon to justice. 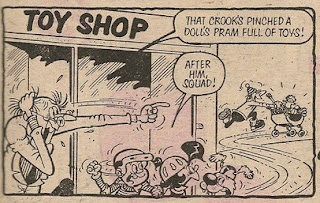 On the Mystery Comic's back page, in Cheeky Weekly cover star Disaster Des' strip, Mike Lacey reprises his baby-launched-from-pram gag as Des causes musical mayhem (another strip that would have been more appropriate last week). 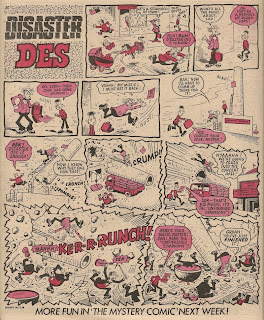 Page 23 carries news of a free competition running next week in Cheeky Weekly and companion titles Whoopee! Buster and Whizzer and Chips. 800 models of The Saint's car, as seen in the TV series based on the books by Leslie Charteris, will be on offer. "Order your copy of Cheeky now!"

The issue concludes with a Cheeky's Pal Puzzle in which readers are asked to devise a route home for Cheeky, exposing him to the ire of the least number of Ursulas. The usherette is stalking the toothy funster, believing him to be the source of the custard pie which splatted her in the cinema (the culprit was actually Burpo). This is the final time that Frank McDiarmid will draw a Cheeky's Pal Puzzle and indeed an Interval; both features come to an end next week and, as Frank is currently drawing all the Cheeky's Week strips every other issue, and he delivers all 10 Cheeky's Week elements this week, he won't be drawing the final strips.