A rather staid presence on British high streets for many years, WH Smith, retailer of books, magazines, stationery, toys and comics, placed 11 advertisements in Cheeky Weekly. 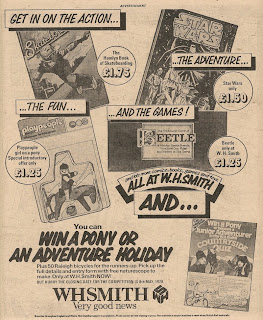 The first ad appeared in the comic dated 15 April 1978. This debut ad was part of a marketing campaign capitalising on two current crazes; skateboarding and Star Wars. It seems that the mere mention of Star Wars was considered enough to get kids hurtling through the doors of their local WHS, as the ad doesn't specify what the Luke Skywalker-related product actually is. But whatever it is, it's only £1.50. Bargain!

The next two products to be mentioned in the ad are somewhat less exciting; Playpeople and Beetle. The latter conjures up images of dreary Sunday afternoons spent hunched over a box containing a selection of synthetic insect parts (at least one leg was always missing).

The ad then perks up with the news that shoppers at WHS have a chance to win a pony or adventure holiday by completing an entry form "with free naturescope to make" (roll the form up, point it at ant, look through it).

Note that the raging inflation which stalked late 70s high streets necessitated the disclaimer 'Prices correct at time of going to press'. 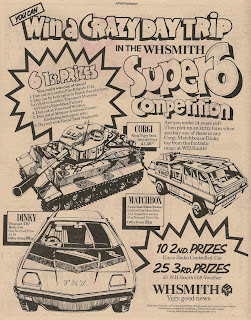 The next WHS ad to appear coincided with the start of the school summer holidays, and graced the pages of Cheeky Weekly dated 05 August 1978. This time, the promotion was based on Corgi, Matchbox and Dinky model vehicles so, unlike the previous ad which attempted to attract both genders, this was firmly aimed at young males. The prizes on offer in the Super 6 Competition consisted of macho activities of various descriptions. And there's 4p off a Matchbox Blaze Buster (Prices are still only correct at time of going to press, so by the time you get to your local store, the Blaze Buster could have gone up 10p). 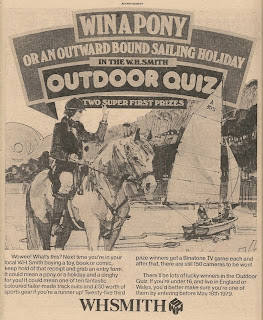 Surprisingly, Smiths apparently declined to place an ad in the run-up to Christmas 1978, and their next promotion appeared in the comic dated 07 April 1979, almost a year after their initial ad. The Outdoor Quiz campaign is clearly female-oriented, as the main prize is a pony (maybe nobody won the pony in the previous competition). Hopefully some sort of stabling and maintenance is also provided - no doubt all that was explained on the entry form. There is an alternative prize of a sailing holiday, but most boys would have stopped reading the ad as soon as they saw the Win A Pony headline. No prices are mentioned in the ad so there's no need for the 'correct at press time' disclaimer. This ad appears on page 22 unlike the two earlier ads which both occupied page 14. 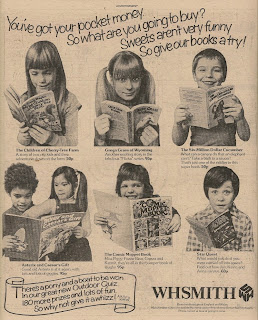 Entries for The Outdoor Quiz can be made up to 18 May 1979, but on 21 April 1979 another Smiths ad appeared, again on page 22. This time, the focus is on books. Smiths can't quite rid themselves of a whiff of nostalgia, as the first book advertised is an Enid Blyton title. The quintessentially British children's writer had died in 1968, but presumably her books were still selling well as the 70s drew to their turbulent conclusion.

It seems that Cheeky Weekly's 6 Million Dollar Gran is not the only attempt to cash in on the success of TV's Six Million Dollar Man, as joke book The 6 Million Dollar Cucumber is among the titles mentioned in the ad. A couple of comic-type publications are also plugged; the potion-swilling Gaul returns in Asterix and Caesar's Gift, which appeared in English translation in 1977, and TV's frog-and-pig duo feature in the newly-published Muppet Comic Book. The scifi boom launched by Star Wars is evidently still thrusting through the stratosphere - the first book in Terrance Dicks' Star Quest trilogy is also given a plug.

As ever, prices were correct at the time of going to press - by the time you get to the shops, who knows? 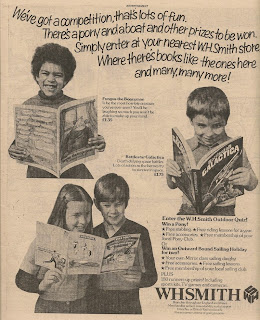 Page 5 is the home of the WHS ad in Cheeky Weekly dated 28 April 1979, in which the Outdoor Quiz is given another push. This time it's made clear that free stabling is provided for the lucky winner of the pony, and the ad takes a more mixed-gender approach than that which appeared 3 weeks earlier. Fungus The Bogeyman and Battlestar Galactica books get plugged. Prices correct at…you know the rest. Take a couple of extra quid with you just in case. 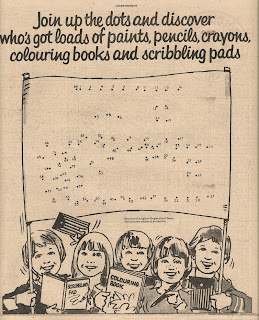 A rather bold idea appears in the 19 May 1979 comic - an ad which doesn't feature the name of the advertiser, or at least not until the reader has applied pen to paper. 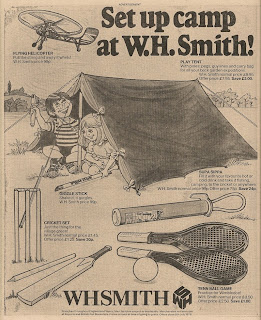 The period of intense WHS advertising continues in the 30 June 1979 issue as, just in time for the start of the '79 summer holidays, a number of items essential for any kid's hols are given a push. Inflation remains high - the disclaimer is still appearing. 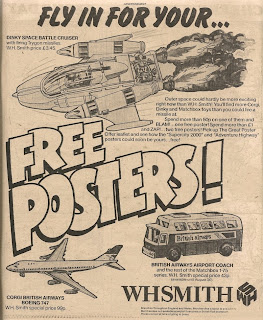 All credit to the WHS marketing department - they're certainly running plenty of promotions. Next up, in the 04 August 1979 comic, is an ad informing us that a new Dinky, Matchbox and Corgi promotion will furnish free posters to purchasers of toys from their ranges. The same ad appears in the following week's issue. 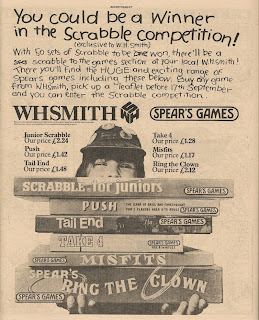 With the nights beginning to draw in, and the end of the school holidays looming, the next WHS ad, in Cheeky Weekly dated 01 September 1979, directs our thoughts towards indoor pursuits with which to while away the gloomy months ahead. This time the retailer is running a promotion in conjunction with board game manufacturer, Spears Games. 50 Scrabble games are to be won. The disclaimer returns, and a rather odd selection of prices is on display, with no two games selling for the same amount. 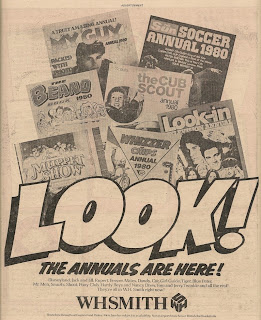 The final WHS ad to appear in the toothy funster's comic was to be found in the 29 September 1979 issue, and focused on that much-anticipated British comic institution, the Annual. Books from a variety of publishers are featured. Was this the only occasion on which DC Thomson's notorious school gang The Bash Street Kids from The Beano appeared in an IPC comic?

Email ThisBlogThis!Share to TwitterShare to FacebookShare to Pinterest
Labels: The Ads, WH Smith