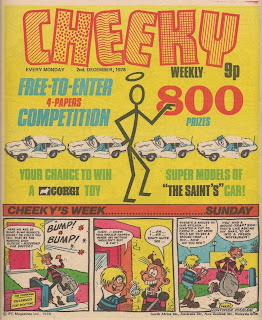 If, as you lift this week's copy of Cheeky Weekly from the neat pile on the newsagents' counter, you feel something is not as it should be, you're quite right. The comic is light by 4 pages this week. This is not the first time that IPC's titles have been affected by the industrial unrest of the 1970s.

The cover gives no clue as to the untoward goings-on inside. The main feature promotes the Saint competition, running in 4 IPC humour titles this week. Cheeky seems to be so engrossed in Bernie's sorry tale in the Cheeky's Week…Sunday strip drawn by Mike Lacey, that he forgets to deliver the newspaper to Bernie's house.

The uncharacteristically silent Cheeky in the final panel of the main Sunday feature is presumably a symptom of the reduced page count. This is the location where Cheeky would normally tell us he's about to watch the latest episode of 6 Million Dollar Gran on TV but, as Gran is one of the features bumped from this truncated issue, it would appear the toothy funster's final Sunday speech balloon has been excised. 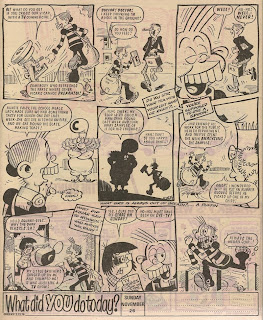 Although the comic has been reduced from 32 to 28 pages, there are in fact only 27 pages of content, because page 3 is the location of this stark message; 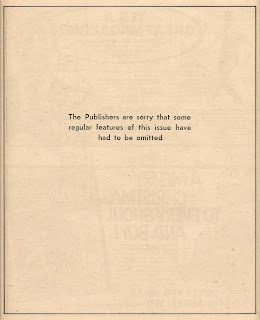 Skateboard Squad take a break from foiling robberies this week, and instead are on the trail of a rather large and unfriendly-looking snake which has absconded from the zoo.

Despite the reduced page count, The Mystery Comic is present this week, and retains the full 8 pages it has had since its inception in the 30 September 1978 issue. However, as one of those pages is devoted to The Big Four Saint competition, the Why, Dad, Why? feature is absent. The competition, which is also running in the current issues of Buster, Whizzer and Chips and Whoopee!, presents readers with 6 stick-men (drawn in the style of the famous logo from the two Saint TV series) engaged in various sporting activities. The challenge is to correctly identify each of the sports portrayed. The senders of the first 800 correct entries opened will win a Corgi model of the Saint's white Jaguar.

Return of The Saint, the second of the small-screen series to feature the adventures of Simon Templar, and starring Ian Ogilvy in the title role, began screening in the UK in September 1978.

The issue rounds off with the last in the brief series of Cheeky's Pal Puzzles. This is the final issue to show Cheeky's Saturday morning cinema visit and as a consequence also concluding this week are Interval, The Terrible Trail To Taggart's Treasure and (at last!) Tweety and Sylvester who were the longest-running representatives of the supporting feature. Since the toothy funster will no longer be seen leading Saturday's cinema-bound stampede, the long-suffering Commissionaire bows out of Cheeky's Week this issue (he will however make one further appearance in the comic, as the subject of a future Pin-Up Pal poster). Fans of Ursula the Usherette need not be concerned; her hulking presence will continue to loom in the coming weeks.

The regular features dropped from this issue due to the reduction from 32 to 27 pages are; 6 Million Dollar Gran (normally 3 pages), Wednesday and Thursday. This means that readers who use the What did YOU do today? diary section at the foot of each Cheeky's Week page have nowhere to record their doings on 29 and 30 November. Despite the shortage of space, one page of the comic is devoted to IPC in-house ads for Soccer Monthly and the latest Shiver and Shake annual. In a rather sneaky, underhanded move, IPC chose not to include page numbers in the comic this week, and maintained the normal 9p cover price.

All 8 Cheeky's Week features this week are drawn by Mike Lacey, who also contributes his usual strip, Disaster Des.