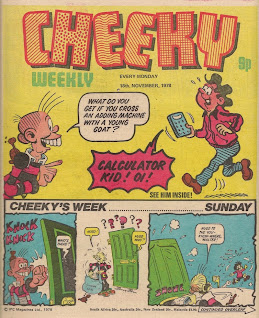 Cheeky shares a gag with Charlie and Calculator on this week's front page, the second and final time our chums from the Calculator Kid strip will feature on the main cover pic - the first time was on the cover of the 05 August 1978 issue, a month after the strip started. We're familiar with this particular rendition of Charlie and his number-crunching mate, as it originally appeared in the first panel of their strip in the 30 September 1978 issue. We'll become even more familiar with it before the end of this issue, and the art will be used in the forthcoming 'place a regular order' ads. Manhole Man must be a bit cheesed off as his trademark 'what do you get if you cross..' joke has been appropriated by the toothy funster, and Calculator has stolen his exclamation, 'OI!'.

Many of the painful puns, geriatric jests and ghastly gags in the Cheeky's Week pages this issue have a musical theme. 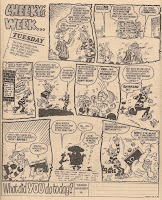 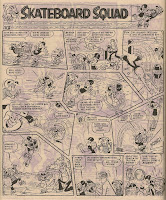 Fitting in with the musical theme, Cheeky enters the listening booth at the record shop, where he finds this week's Mystery Comic.

Rum goings-on are afoot on the streets of Chipping Codbury in the latest instalment of Elephant On The Run. 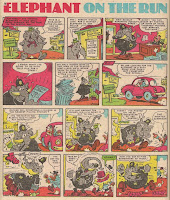 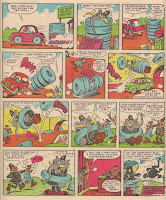 The contents of the final panel of the Thursday page are strangely familiar, yes it's Charlie and Calculator in a redrawn version of their 30 September 1978 appearance. To be fair, I suppose it's difficult to draw the pair in a recognisable yet significantly different walking pose. 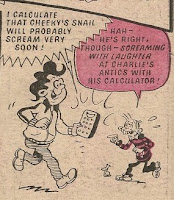 This week's musical theme extends to the Calculator Kid strip, as the children's entertainer booked to appear at Charlie's party fails to turn up. Charlie's attempts to sing and play the guitar don't meet with the party guests' approval, but ever-reliable Calculator's plan secures the services of country and western singer Hank Lark, who is seen in the final panel singing Home On The Range to a seemingly rapt group of young guests at Charlie's party. Not exactly the soundtrack for a riotous rave-up.

On page 24, Cheeky asks readers to vote for their favourite celebrity - the most popular suggestions will feature on a poster in future issues.


The back-page Cheeky's Pal Puzzle rounds off the issue with a musical poser, as readers are challenged to guide Disco Kid to the disco via a route that will secure him 12 records.

Next week's 6 Million Dollar Gran and Disaster Des strips will both be musical instrument related so would have fit with this issue's musical theme.

All 10 elements comprising Cheeky's Week in this issue are by Frank McDiarmid pencils, so the policy of having all the Cheeky strips in each issue by one artist (or combination thereof as is the case this week), introduced in the 30 September 1978 revamp issue, still holds true.