In late 1970s Britain, national stereotypes were commonly used as a source of 'humour' in the media. Thus, while the portrayal of Cheeky's Uncle Hamish seems rather shocking to us now, we must bear in mind that the times in which Cheeky Weekly was being published were very different.

Uncle Hamish had a curiously uneven presence over Cheeky Weekly's run. His first appearance was in the 07 January 1978 comic (the 12th issue), in which he was the first across the threshold at Cheeky's new year party, but he didn't appear again until issue 62 (13 January 1979), when he turned up at the next new year bash. After his second appearance, he featured in all but 7 of the 54 issues remaining until the comic's demise, and of those issues, in 11 he featured on more than one page. In total, Hamish graced 50 issues.

Most of the jokes associated with Uncle Hamish referred to his parsimony. His speech was liberally sprinkled with Och Ayes, Ye Kens, and The Noos.


Hamish was the subject of The Burpo Special in the issue dated 27 January 1979, only the fourth issue in which he had appeared. In addition to The Burpo Special, Hamish featured on each of the 2 Saturday pages in the same issue. This and the 28 April 1979 issue were those which featured the highest number of pages on which Hamish appeared - 3 each.


In the 10 February comic, Hamish was in possession of The Mystery Comic, and made the toothy funster pay for it (the price he demanded was not revealed).

Hamish, under the influence of Hypno-Tessa, was seen whipping a £5 note from his sporran and handing the cash to a busker in the comic dated 28 April 1979.

It won't be a surprise to learn that Hamish was first across the threshold again at Cheeky's 1980 new year party. 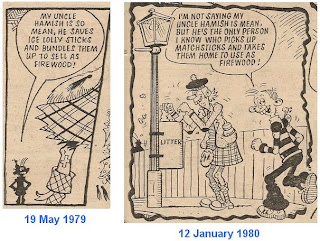 In the final issue of Cheeky Weekly, Uncle Hamish was seen coveting the combined cash of Mustapha Million and The Bumpkin Billionaires, as the fun-folk from Cheeky Weekly met their Whoopee! counterparts prior to the merge.

On 24 March 1979's Pin-Up Pal poster, Hamish was seen fleeing in terror from Do-Good Dora's collecting tin. The shock was so profound that it brought on an attack of Cheeky Weekly Inconsistent Hair Colour Syndrome, turning the locks of the scampering Scotsman, previously depicted as ginger on the cover of the 13 January 1979 comic, a bright yellow. The change proved permanent, as a yellow-haired Hamish was seen on the cover of the issue dated 10 November 1979.

Uncle Hamish never appeared in the 'Ello It's Cheeky strip in Krazy.

Another Uncle Hamish appeared the issue dated 28 October 1978. This was Hamish McPotts, relative of the Potts family, and he was featured in that issue's 6 Million Dollar Gran strip.