From Whoopee! dated 10 July 1982. By this stage, well over 2 years since Cheeky Weekly had merged into the title, Cheeky's feature had been reduced to a single page each week, located perilously at the rear of the comic. Other Cheeky Weekly alumni surviving since the merge were Mustapha Million, Stage School (artwork duties at this point having just been handed briefly from Robert Nixon to Brian Walker) and 6 Million Dollar Gran (whose strip had by this time been re-titled Robot Granny as memories of the TV series which inspired it receded into the past). Ironically, these strips were faring rather better than the toothy star of the comic in which they originated, as all were featuring on 2 pages per week. Also representing the ghost of Cheeky Weekly were Calculator Kid and Paddywack. Despite the presence of this considerable contingent of ex-Cheeky Weekly stars, mention of Cheeky on the cover had long since been dropped.

Little Ed was one of those strips where the artist (in this case always wryly referred to as Starvin' Artist) was one of the characters and 'drew' the strip while it was in progress. In this particular episode drawn by regular artist on the feature, David Mostyn, a few stalwarts from other Whoopee! pages make guest appearances. Joining Sweeny Toddler and Frankie Stein are 2 refugees from Cheeky Weekly; Paddywack and the toothy funster himself. 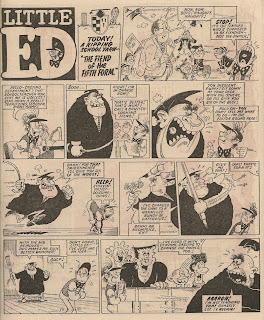