A week after Mustapha intruded upon Sweet-Tooth, our moneyed mate was subject to a Whizz-Kid intruder. Scroll down to discover the identity of the interloper. 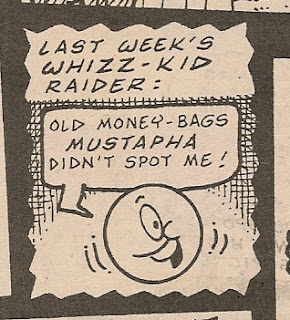 Yes, it's the rubbery rascal Odd-Ball, making his 3rd raid on Mustapha. We might have guessed the sneaky sphere wouldn't be far away when the strip concerned a load of balls. Odd-Ball had been intruded upon by Mustapha on 2 previous occasions.