Which is the most striking feature on this week's cover? The above-title banner which makes reference to the daily nature of Cheeky's strips? The dynamic depiction of synthetic senior citizen 6 Million Dollar Gran? The canine capers in which Cheeky and Petula are engaged? Well, if your pocket money is being stretched to its last penny chew, the most significant item is the cover price which has increased by 1p to 10p as of this issue. This inflationary attack on juvenile spending power is presided over by a beaming toothy funster, who seems delighted to see the new price.

However, readers should have arrived at the newsagent equipped with the requisite cash, since our grinning pal announced the impending rise in the cost of our favourite title on the final Saturday page of last week's issue.

This is the second price rise for Cheeky Weekly, the first saw the cost rise from 8 to 9p just 10 months ago, as of the 16 September 1978 edition (although on that occasion the unwelcome increase was offset by the presence of a prize competition).

On page 2 Frank McDiarmid depicts a typically side-splitting Sunday for the toothy funster, as Cheeky indulges in banter with a selection of Krazy Town folk while negotiating his weekly paper round. 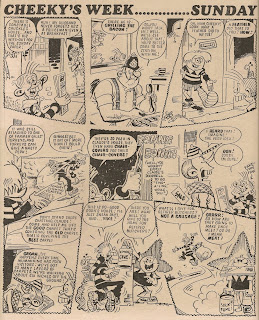 Public-spirited Calc devises a plan, making use of a fortuitous fluctuation in atmospheric conditions, to clean up the streets in this weeks' Calculator Kid.

Further litter larks are in evidence during this week's adventure of The Gang... 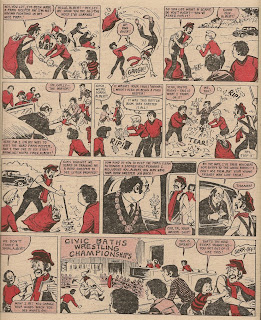 Cheeky has an eerie encounter with a new pal on Thursday; it's that funny phantasm, the ghastly gagster himself, Spook.

...following which the comic rounds off with Snail of the Century.

Some characters from Cheek's Week make their final appearance in this issue - Baby Burpo's mum and dad, and Scruffbag the school cat.

The Cheeky's Week features in this issue consist of 5 which are pure Frank McDiarmid, and 4 that are inked by another artist (or Frank McDiarmid pencils as I usually refer to such art).