Regular readers of this blog will be aware of an ongoing series of posts in which I am documenting the 'Cheeky raids' in Whizzer and Chips. In order to research this series I embarked on, and continue, a programme of re-reading all the issues of Whizzer and Chips commencing from the Whoopee merge in March 1985. This is the first time I have looked at these issues since I bought them weekly as they were being published.

This exercise has been quite instructive in ways other than relating to the Cheeky raids. I have been pleasantly surprised to find how good the comic was as it reached this late stage in its life (I'm currently up to the February 1987 issues). The old faves - Odd-Ball, Joker, Sweeny Toddler to name but three - continued giving good value, and some fun newcomers - Bottom of the Class, Memory Banks, for example - kept the mix bubbling nicely. Furthermore, some gaps in my (far from comprehensive) comic knowledge have been filled as on a number of occasions during the period in question readers wrote in to W&C asking who drew particular strips. Thus was the true identity of the first Store Wars artist revealed a few weeks back. Now I have learned something that has exposed a serious deficiency in my comics knowledge and plunged me into a bit of a crisis.

Actually, this comics quandary began developing a few weeks ago when I read a W&C letters page in which a reader asked the name of the artist who drew Shiner. Now, I'd always believed that the stories of the head Chip-ite were drawn by Mike Lacey, so I was not a little surprised to read that the adventures of our black-eye-sporting buddy in fact originated from the pen of Jimmy Hansen. Jimmy's was a name that I was aware of, but for some reason had never attributed to any particular strips. My shock at learning I had mis-identified the hand behind Shiner for so many years (never mind the fact that I must have read the same letter when the comic first came out) induced a crisis of confidence in my artist-identifying skills, which I thought were pretty good in respect of IPC humour comics of the 70s and 80s. I realised I suffered an ingrained blindness as to the different styles of Messrs Lacey and Hansen and really couldn't identify one from the other. A very odd feeling. I then entered a state of denial about the whole episode.

My inability to accept the reality of the situation was shattered when I read the following letters page in Whizzer and Chips dated 28 Fenruary 1987... 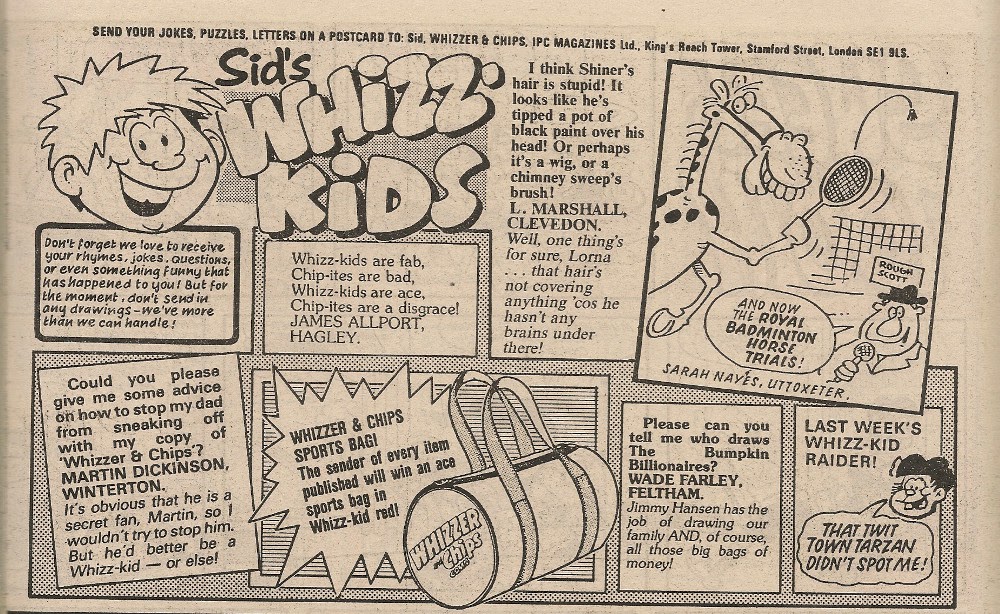 That was another of my comics certainties destroyed - I'd always believed the Bumpkins to have been by Mike.

By this time it was clear I needed to re-evaluate any references to Mike Lacey on this blog.

First of all, let's have a look at the Bumpkins strip from the same issue of W&C in which the above letter appeared...


And, for comparison, here's the Phil Fitt story from the same edition, and I think this is by Mike Lacey... 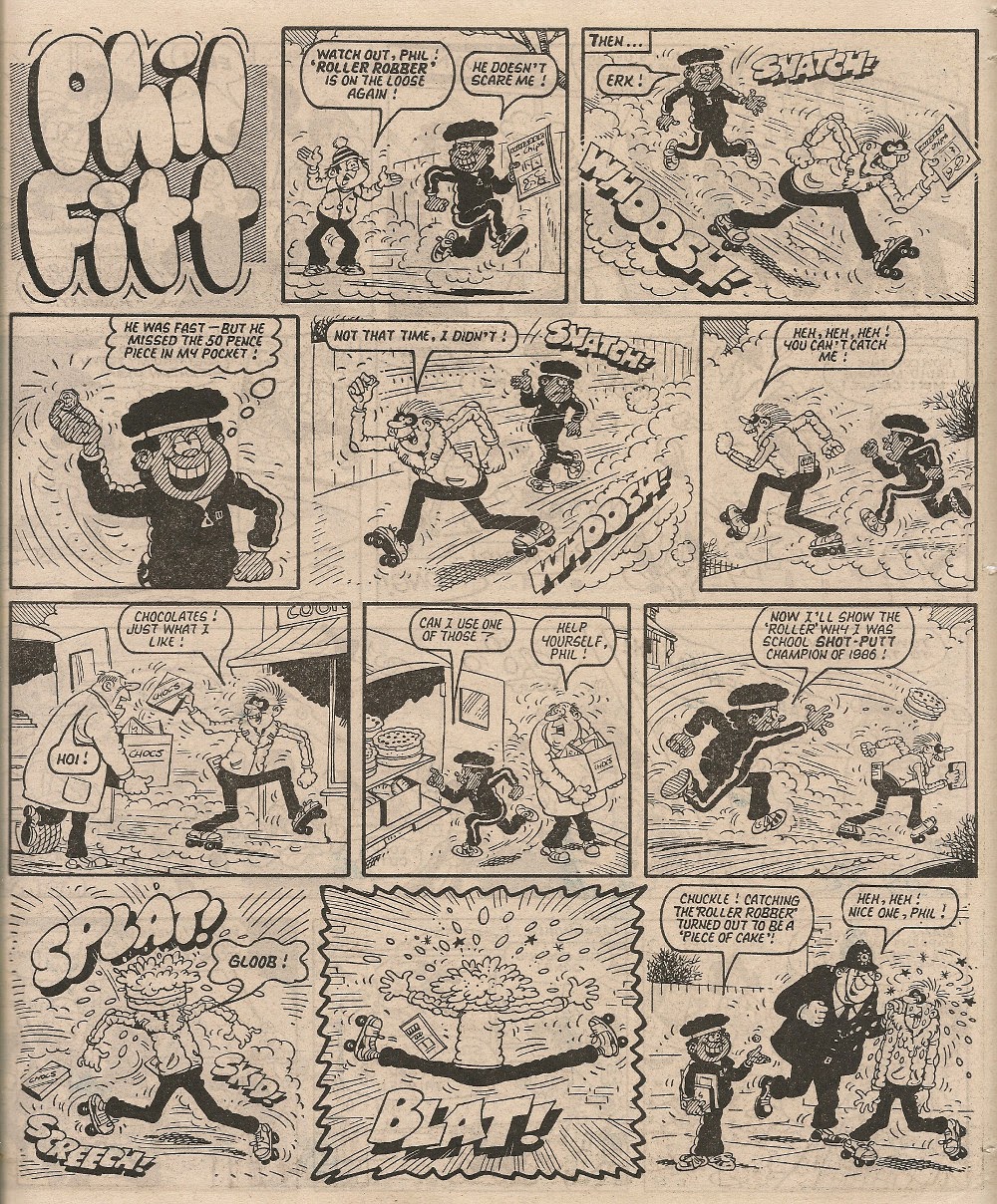 Using just one strip from each artist to identify their differences is difficult of course, but I have been studying multiple examples over the last couple of weeks and I think I'm now beginning to see the differences. It's hard to generalise about the divergences in their style, but I would say Jimmy's work goes more into extremes of action and facial expression (sometimes bordering on the grotesque), whereas Mike's work is a little more reserved.

I have now begun to re-evaluate the Cheeky Weekly work that I have heretofore attributed to Mike Lacey. I began by looking at Skateboard Squad and its successor Speed Squad.

Let's pick a page from each and have a look at the drawing style... 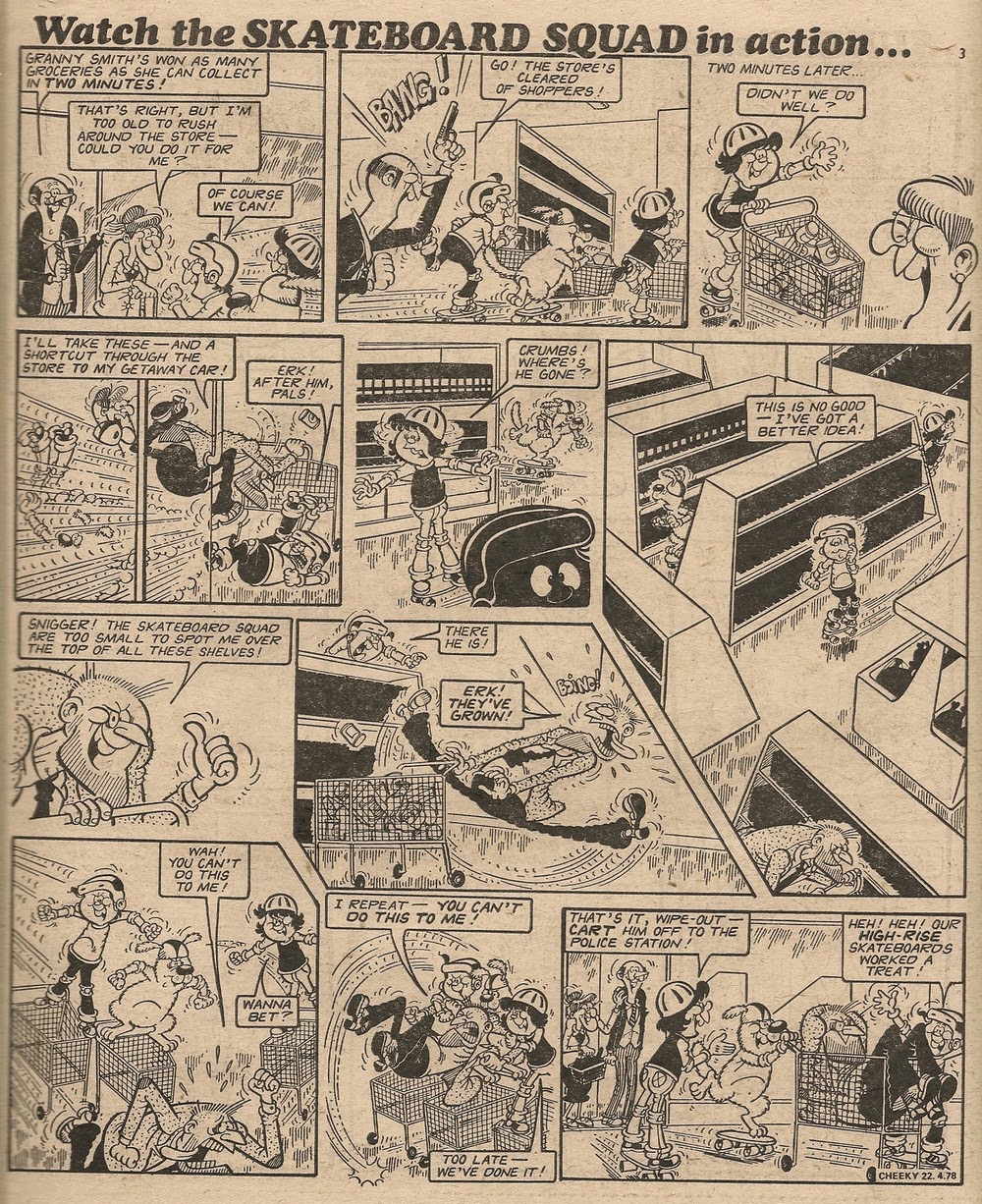 ...I reckon the above is by Jimmy Hansen - note the face in panel 8; not a Mike Lacey expression.. ..the women in this Speed Squad strip seem to be variations on a theme of Ma Bumpkin so I'm going for Jimmy Hansen again.

I'd welcome any comments about my re-identification, whether you agree with my conclusions or not, before I go ahead and update the blog (and then go on to look at the remaining work I have attributed to Mike). Cheers!
Posted by Niblet at 14:58