For the second week running the Cheeky's Week...Sunday strip occupies the whole of the front cover beneath the comic title, but this time an extra panel has been added to allow us to fully appreciate the edifying sight of a traumatised Granny Gumdrop ejecting her dentures.


In her story this week a sympathetic 6 MillionDollar Gran, seeing the Potts kids struggling with their homework, attempts to find the answers to the questions they've been set.

The synthetic senior citizen's over-enthusiastic efforts at supplying the solutions have predictable results. 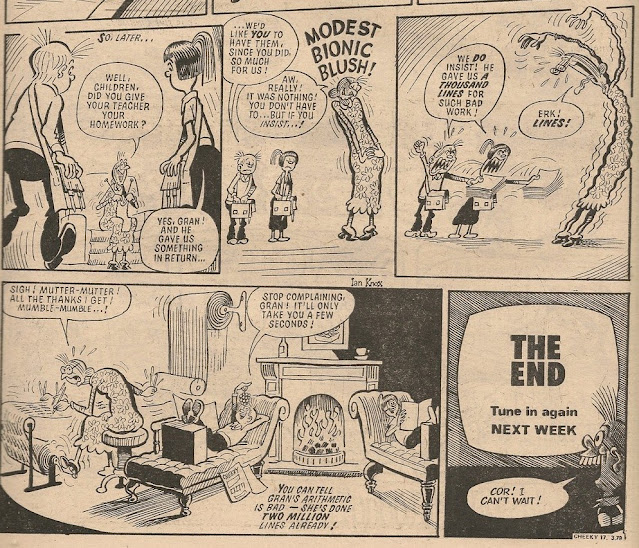 Gran undergoes a 'Bionic Blush', which is a little puzzling as in the first issue of Cheeky Weekly it was clearly established that she is a robot. Young Pete Potts is seen in the closing panel having put aside a copy of Cheeky, which is missing the 'Weekly' from its title.

There are more comics on view in the Calculator Kid story. This episode, culminating as it does with Charlie receiving some cash plus a pile of comics and 2 days off school in which to read them, couldn't fail to appeal to Cheeky Weekly readers. Most kids would probably prefer a bag of sweets instead of the basket of fruit but you can't have everything. 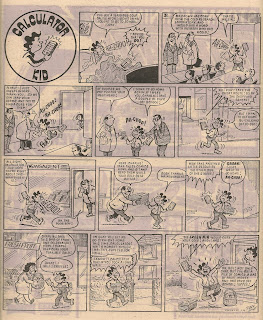 There's an interesting juxtaposition of ads on page 8 –  I wonder how the marketing department of AA Hales Ltd (UK agents for North Pacific Flyers) will feel when they see their ad below one which offers a free flyer to readers of IPC's new adventure comic Tornado, due to breeze into newsagents next week. Admittedly the Turbo Flyer to be given away with Tornado issue 1 looks rather basic, but it still must be rather galling for Hales to have their ad sharing a page with news of a free flying toy. IPC had another half page ad for one of their titles, Mickey Mouse, on page 29 so maybe it would have been more considerate of them to have swapped their ads' locations. This was the first North Pacific ad to appear in Cheeky Weekly, and they placed ads in a further 4 issues during Cheeky Weekly's run, so evidently they weren't too upset by the placement of their debut ad.


TV addict Square-Eyes is the subject of The Burpo Special, then returns on Wednesday to hand Cheeky a copy of The Mystery Comic. 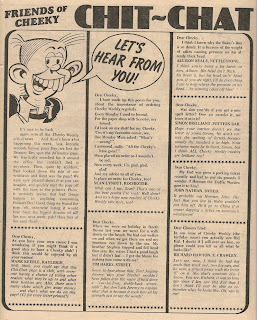 This week's Pin-Up Pal back cover poster features the Cinema Commissionaire, who hasn't actually appeared in the comic since the 02 December 1978 issue which was the final occasion on which Cheeky was seen at the Saturday morning picture show.