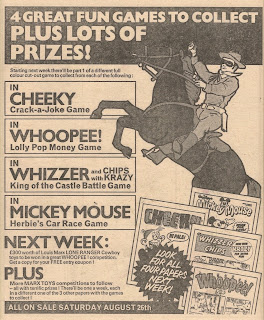 Cheeky Weekly dated 26 August 1978 carried news of a cut out games promotion that would feature across their humour titles as from the following week. This promotion, which also promised prizes from toy manufacturer Marx (who themselves were promoting their new line of Lone Ranger figures), was timed to coincide with the end of the school summer holidays and the prospect of the nights closing in. I would guess that comic sales traditionally fell off during the summer as some erstwhile readers forsook comic consumption in favour of outdoor actvities, so publishers IPC hoped not only to recoup those who had strayed, but also encourage a regular comic-buying habit in those who had been lured into purchasing an unfamiliar title just to get the game or enter the competition.

Different games appeared in each of the participating titles. In keeping with its gag-oriented nature, Cheeky Weekly was host to the Crack-A-Joke Game, which appeared in the comic over 4 weeks from 02 September 1978 to 23 September 1978. It was a board game based around the Saturday morning pictures element of Cheeky's Week which ran in the comic from the first issue until that dated 02 December 1978. Players competed to be the first to reach the cinema, but matters were complicated by having to collect and dispose of question and answer cards.

The first issue to contain elements of the game featured half of the board on the centre pages, together with 12 of the associated cards on the back cover. In the following issue, the remaining half of the board occupied the middle of the comic, and a further batch of 12 cards were printed on the back page. A week later another dozen cards featured on page 16 (the right-hand half of the centre spread). The final elements of the game, consisting of a further 12 cards on page 17, together with the all-important and quite complex instructions on page 22 (located safely away from the cards so that cutting them up didn't deprive readers of the rules).

The likenesses of Cheeky and pals included on the board and the cards were all drawn by Barrie Appleby.

The confusion over 6 Million Dollar Gran's relationship to Cheeky's universe, which originally arose in a Skateboard Squad strip in the 04 February 1978 issue, continues with this game, where the synthetic senior citizen is included among the Krazy Town characters whom players encounter as they move around the board. In Cheeky's universe Gran was a character in a TV show.

Also lost to posterity - comics that had been cannibalised in order to assemble the game would be depriving future comic historians of...