Were the readers of late-era Whoopee the most regularly-polled (some might say mercilessly-polled) comic audience in history? I don't know, but I strongly suspect they were. However there's no time for further consideration of that now as we need to dive in to the next set of results...

The previous post in this series concluded with the Top Ten results printed in the 06 November 1982 issue. 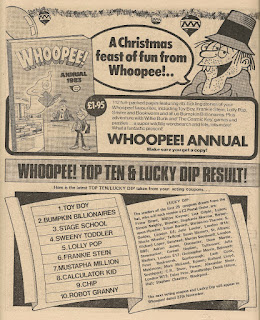 As the editor promised, another voting coupon was printed in the 27 November 1982 edition, and the next results appeared in the comic dated 04 December 1982. Clearly votes sent in response to the 27 November coupon wouldn't be reflected in the 04 December results but presumably the frequency of the voting coupons (7 appeared in the comic during 1982) meant that there was a continuous background trickle of completed Top Ten coupons arriving at the Whoopee office, as well as the small voting coupons that featured on most of the letters pages.

What features had ended between 06 November and 04 December issues?


...this was something of a filler in which readers were presented with scenes from a selection of the stories within that week's edition and then set questions about the events which had transpired in those strips.

What new additions had there been?


Calculator Corner, launched in the same issue that contained the final Whoopee It's Quiz Time, was of course a spin-off from Cheeky Weekly's Calculator Kid. This single-row-of-panels-per-week quiz concoction set readers puzzles which they could use their new pocket calculators to solve. Quizmaster was another brainteaser replacement for Whoopee It's Quiz Time (although unlike its full-page predecessor, Quizmaster was limited to a half-page per issue), the new feature hosted by different Whoopee stars each week. Rambling Rhymes was a series of strips featuring captions written in verse.

The following strips continued during the period under review...


Mustapha Million re-enters the top 5, having fallen to 7th place in the previous results.


Calculator Kid has also fared better this time, up from 8th place to number 6.


Stage School have made a dramatic move in the opposite direction, dropping from 3rd place last time to number 8.


Robot Granny, having edged back into the results in 10th place last time, is absent. Cheeky and Paddywack remain consistent in failing to trouble the typesetter of the poll results yet again.

My examination of the fortunes of the ex-Cheeky Weekly funny folk in the Whoopee Top Ten polls continues in part 8.