Swiftly following bandage badinage with Bump-Bump Bernie, our toothy pal has his 19th front cover encounter with Manhole Man (in what is the final Cheeky's Week...Sunday cover strip - more on that later).

Dick Millington takes up the Cheeky's Week pen from Frank McDiarmid as Sunday continues on page 2, where the toothy funster informs readers that he's looking forward to Saturday, the occasion of the Vicar's countryside ramble.

Despite the mounting excitement over the forthcoming rural excursion, Cheeky makes sure he's home and in front of the TV in time to watch the latest episode of 6 Million Dollar Gran. This week our favourite aged automaton enters a modern-day jousting contest. The reference to the synthetic senior citizen's 'bionic wrist muscles' as Gran parries her opponent's mighty sword stroke demonstrates the writer has again forgotten that Gran is a robot, as was clearly established in the first issue.


On Monday the forthcoming ramble is still preoccupying the youth of Krazy Town, and if you've ever wondered what Dick Millington's version of Calculator Kid would look like, direct your eyes to the final panel...


This week's Star Guest, on page 11, is Chelsmsditch's rival to Gran, Supermum, paying a visit from Whoopee.

On Wednesday Gunga Jim provides Cheeky with this week's Mystery Comic, retrieving the fabled funny paper from within his turban. In the latest edition we learn what befalls the unwise tax officials who decide to pursue the moolah owed by Des' disastrous family.

There's a full complement of Mystery Comic features this week (although Elephant On The Run has been reduced to a single page due to the presence of an ad for The Stickits), which is pleasing since this is the final issue to feature the Mystery Comic as a conceptual grouping of strips in the centre pages. Let's enjoy the episode of Why, Dad,Why? given the honour of bringing this last edition of the perplexing publication to a conclusion.

Returning to Cheeky's Week on Thursday, there's evidence of adjustment to the final panel, wherein a Frank McDiarmid rendition of the toothy funster has been substituted for Dick Millington's art. The spectacle of Uncle Hamish travelling at high velocity in the penultimate frame leads me to suspect the original final panel contained the intro to Speed Squad, who are absent this week, possibly bumped by an advert.

Pages 26 and 27 are host to the final instalment of Menace of The Alpha Man. The masked marauder's true identity is revealed, but Cheeky Weekly readers who submitted entries for the associated competition following the final clue in the comic dated 16 June 1979 will have to wait until the winners are named 'in a few weeks'.

Cheeky's message on the Chit-Chat page carries the first intimation of changes in the offing... 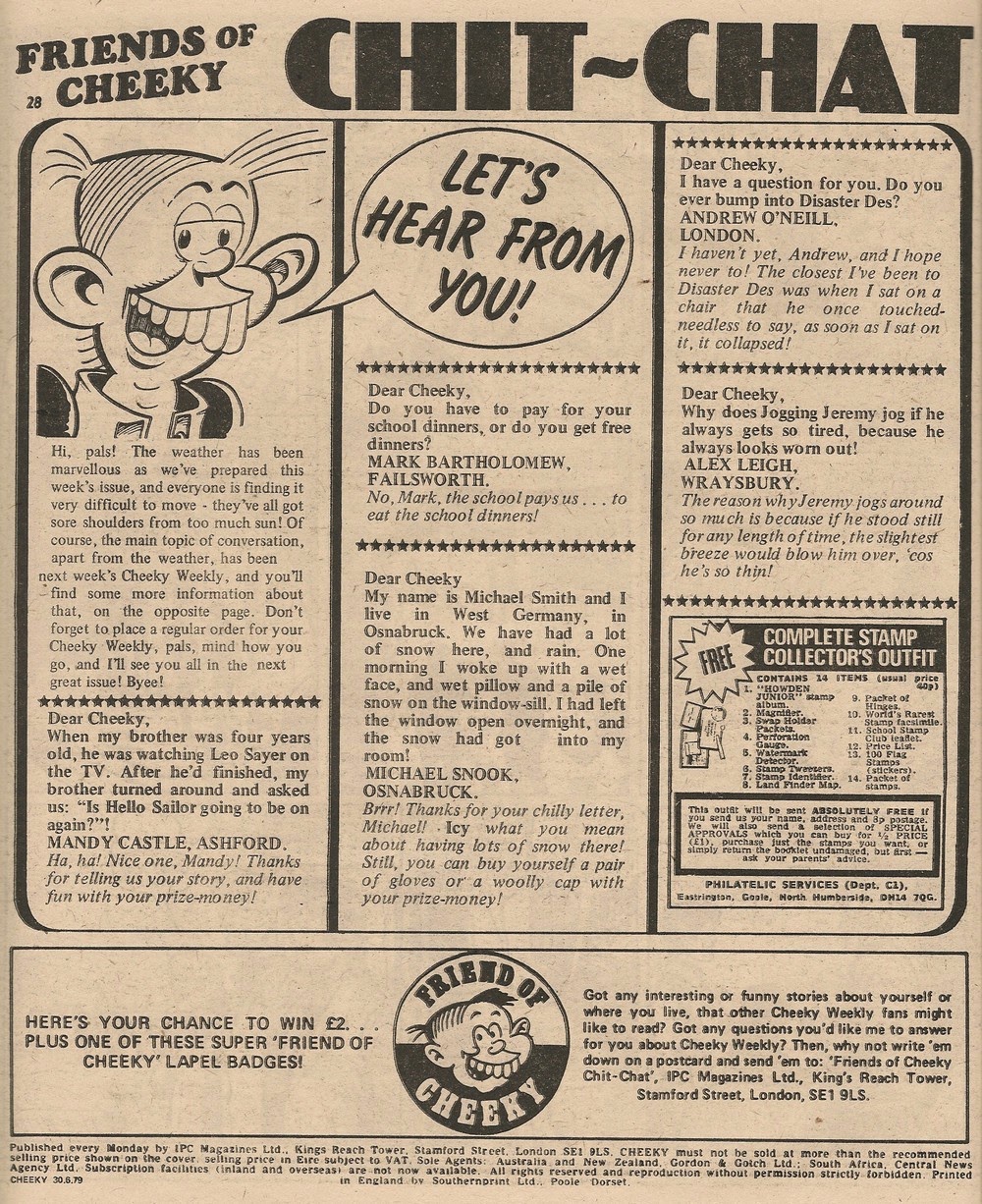 ...and the toothy funster and slimy sidekick further tantalise readers on page 29... 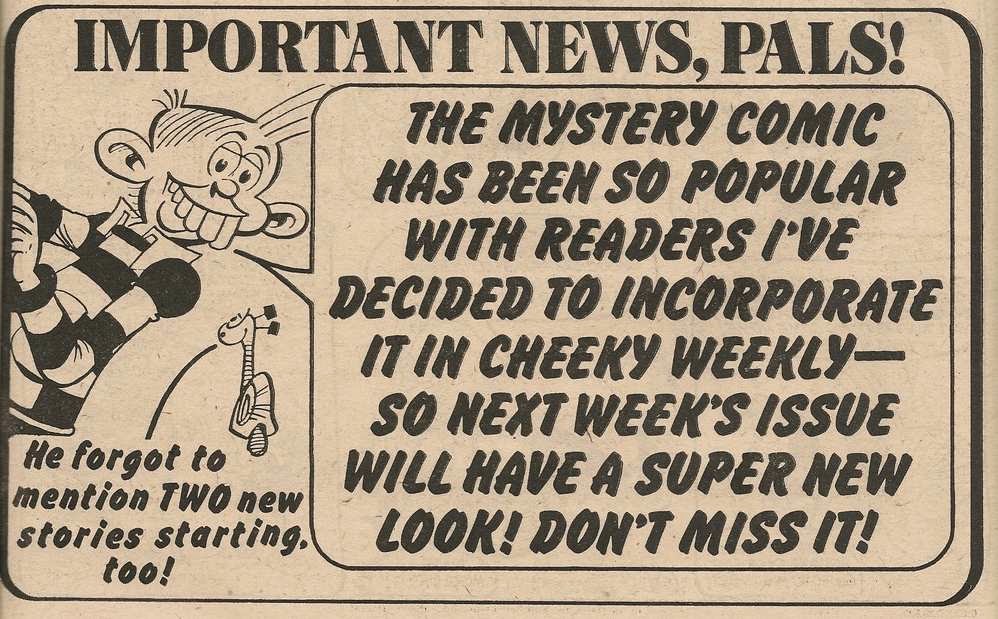 Saturday's much-anticipated ramble is enjoyed by all, and after the exertion Cheeky is in need of a sustaining plate of his mum's finest fish and chips. Snail, ever conscious of comic sales, take the opportunity to raise the excitement regarding next week's comic.

The Burpo Special, whose subject this week is substandard sleuth Sherlock, brings the comic to a conclusion, and also closes another chapter in Cheeky Weekly's history as the comic prepares to undergo another revamp next week.

Frank McDiarmid provides only the cover strip this time, with Dick Millington delivering 8 Cheeky's Week elements and Mike Lacey furnishing the Burpo Special. Clearing space for the forthcoming changes, the following strips come to an end this week as mentioned above;

Cheeky's Week...Sunday
Menace of the Alpha Man
The Burpo Special

...and the Mystery Comic section also concludes, although all the strips that had been contained within its pages will continue, freed from being grouped about the centre of the comic.

See you back here next issue for our first sampling of Cheeky Weekly's 'New Look'!