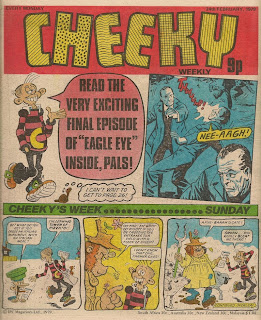 Cheeky Weekly issue 68 has an unusually violent cover as, with a Thwuump! and resultant Nee-Aagh!, readers are alerted that the final instalment of Eagle Eye appears inside. Surprisingly, schoolboy hero Eagle Eye himself isn't present in the panel from this week's story chosen to appear on the front page. Using precious cover space to advertise the final episode of a serial seems rather odd, but at least it bookends things nicely with the front cover of Cheeky Weekly dated 06 January 1979, which heralded the commencement of the (reprint) series.

Sharing the front page is the Cheeky's Week...Sunday strip, which sees our grinning hero indulging in manhole mirth followed by farmyard fun.

This week's 6 Million Dollar Gran episode is reduced to 2 pages from the usual 3, and filling the vacant spot is the second appearance of the Tease Break puzzle feature.

The Cheeky Weekly office must have been inundated with Paddywack jokes from the readers (and have plenty of cash in the prize kitty) because for the second week running there are 2 pages featuring the disconcerting duffer.

Speaking of prize kitties, the cat we saw in 27 January 1979's Calculator Kid strip is back this week. I hope Charlie slipped the inquisitive moggy a piece of fish as he enjoyed his cod and chips reward.


The Knock-Knock Door is the source of The Mystery Comic this Wednesday...


In Elephant on the Run our hero, masquerading as a fortune teller until The Man in the Plastic Mac appears, makes ingenious use of his nasal attributes when adopting another disguise.

Later in the same strip Elephant confuses British boxing legend Henry Cooper (or 'Couper' as the script has it, probably to avoid legal issues resulting from the punch-up conclusion) with fez-wearing comic magician Tommy Cooper.


Tommy Cooper also makes an appearance in the Mustapha Million strip, in which Mustapha manages to trump every one of Boastful Bertie's attempts at bragging. Among the celebrity guests at Mustapha's banquet are Ken Dodd, Bruce Forsyth and the aforementioned tassel-topped titfer toting tittermeister. That may well be popular pugilist Our 'Enry again at the right hand end of the table, but I'm not sure.


This is turning out to be a star-studded issue of The Mystery Comic, as The Two Ronnies make an appearance in the final panel of this week's Why, Dad, Why? strip.

For the third week running, all the Mystery Comic features are present, with no unexpected intrusions into the pages of the perplexing publication.

Silly Snaps continues its sporadic run, having last appeared in the 03 February 1979 issue.

On page 22 we get a glimpse of the thrills that lie ahead in place of Eagle Eye next week...

The Thursday page features an encounter between Cheeky and Yikky-Boo that will be re-used on the cover of the 14 July 1979 issue.


This week's comic wraps up with a back-cover Pin-Up Pal poster featuring a puzzled Doctor Braincell.

It's been a busy week for Mike Lacey who, in addition to his usual strip Disaster Des, has provided the artwork on all 9 Cheeky's Week elements. Frank McDiarmid delivers the Pin-Up Pal poster.