The latest Cheeky Catalogue of Jokes gets plugged in this week’s above-title banner while below, Gunga Jim joins Cheeky for a cover gag for the fifth (sixth if we include Jim's appearance in the Cheeky's Week strip on the front of the 17 March 1979 edition) and final time.

On page 2 Mike Lacey gets Cheeky’s week of gags rolling with the toothy funster’s traditional Sunday paper round, including a delivery to Constable Chuckle.

Page 4 is devoted to Paddywack who continues to confound in another 3 gags submitted by readers.


This week we get to see the full complement of Stage School teaching staff; with ‘real’ teacher, headmaster and ‘showbiz’ teacher all taking part in the story. 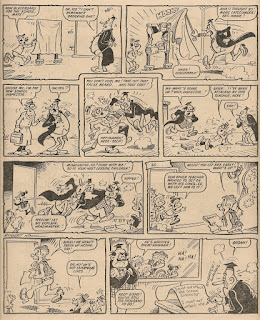 With an eye on Christmas sales, Palitoy place on page 8 a deftly-timed full-page ad for Action Man Transport Command vehicles. Evidently concerned about cheap knockoffs denting their profits, the toy manufacturer is keen to stress that their Transport Command rage is the ‘only kind’ of vehicle the mini military man ‘ever drives’ and that purchasers should ‘look for the picture of Action Man on every box’.

Poor old Auntie Daisy, the school meals lady, has her culinary skills called into question on two occasions this week…

Colin Whittock stands in for Jimmy Hansen on Speed Squad for the second (and final) time. The rarely-seen mum of Skipper and Skatie makes an appearance the end of the strip.

On the Chit-Chat page Cheeky continues his series focusing on the creative team behind his comic. This week ‘Uncle’ Joe McCaffrey is the subject. 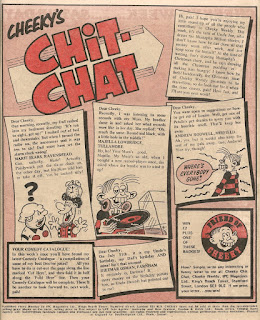 On Saturday the toothy funster realises he hasn’t met many of his female pals so far this week (Ursula, Crystal Belle and the aforementioned Auntie Daisy to be precise), so sets about trading gags with Lily Pop, Do-Good Dora, GrannyGumdrop, Snoozin’ Susan, Petula, Gloomy Glad, Hypno-Tessa and one more of the female supporting cast who he professes to dislike, but we all know different...

As has become the custom, the comic finishes with the back-page, back yard banter of Snail of the Century.

Mike Lacey handles all the Cheeky’s Week artwork this issue, with Frank McDiarmid providing the cover and Snail of the Century.