Two weeks after Mustapha Million infiltrated Chips' Animalad strip, the loaded lad was targeted in a revenge raid. But can you spot the sneaky interloper? Scroll down for the reveal... 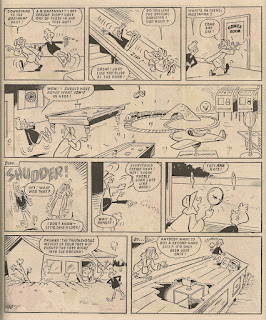 Unusually, the raider wasn't depicted on Sid's Whizz-kids page, possibly because space was tight due to the debut of Glow Boy, a character inspired by the long-running Ready Brek TV advertising campaigns that each year heralded the approaching winter months.

By this stage Mustapha had perpetrated and suffered 3 raids, and the overall tally at this point was Whizz-kid raiders 9, with 6 raids carried out by ex-Cheeky Weekly characters.