Way back in July 2011 I concluded my series on IPC's Cheeky Weekly-related entries in their Mini Comics promotion of 1978. Unfortunately I seem to have prematurely drawn the series of posts to an end, as I've now realised that I never presented the Cheeky Weekly mini comic that appeared in Whizzer and Chips dated 22 July 1978 (the final week of the promotion).


As was the case with the Cheeky mini comics in Whoopee! and Buster and Monster Fun (but curiously not the one in Mickey Mouse), this weeny version of the toothy funster's title featured on its cover artwork lifted from one of the Pin-Up Pal posters – in this case Frank McDiarmid's rendition of comical cowpoke Six-Gun Sam, which originally appeared in Cheeky Weekly a couple of months before this mini comic was published (the issue dated 13 May 1978). Below our lasso-wielding pal is an original What A Cheek gag strip by Frank. To the left of the 'fold here' line, on the mini comic's back cover, is a Bam, Splat and Blooie reprint from Buster. As I have noted in my conclusion to the Star Guest series of posts, the choice of strips used in these supposedly readership-boosting campaigns can sometimes be baffling. The reduction in the size of the strip, necessary to fit it onto this condensed comic, does the artwork no favours but if any Whizzer and Chips readers had been sufficiently enamoured of it to seek further cat, dog and bird antics within the pages of Cheeky Weekly, they would have been sorely disappointed since BS&B had come to an end in the issue of our grinning pal's comic dated 17 June 1978, a month before this mini comic appeared. 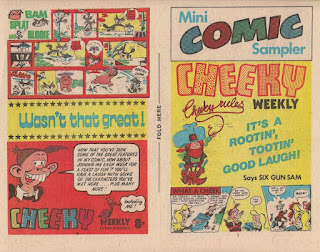 There then follows the first page of a 6 Million Dollar Gran story by Nigel Edwards, who at this point over at Cheeky Weekly had deputised twice for regular artist Ian Knox. As was so often the case, even within the pages of the toothy funster's regular-sized funny paper, Gran is described as bionic when her origin story made it clear she was a robot. After a good gag from the museum attendant, Gran's fossil frustrations are interrupted by the Skateboard Squad, who manage to wrap up their pursuit of some purloined moolah within a single page. Art by Cheeky Weekly's regular Squad pencil-pusher, Jimmy Hansen. 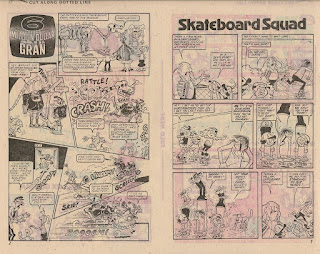 Our monied mate Mustapha Million is the next to be recruited for this visit to Whizzer and Chips, in a rather unsettling story which culminates with our Bedouin buddy gleefully surveying the injuries suffered by some (albeit unpleasant) kids. Not really the kindly Mustapha to whom regular Cheeky Weekly readers were accustomed, and the strip gives those unfamiliar with the character little clue of its original premise. Although the illustration of MM alongside the title is drawn by Reg Parlett, Joe McCaffery (who that very week, in the toothy funster's comic, had stood in for original Mustapha artist Reg for the third time) provides the artwork on this story. Joe became the regular artist on the strip in February 1979. Adjacent to Mustapha's uncharacteristic outing, Gran's Paleozoic panic reaches its chaotic conclusion. 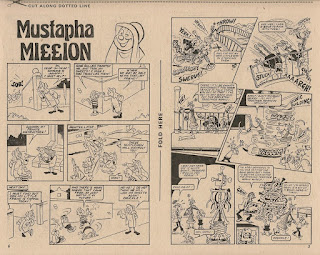 Occupying this mini comic's centre pages is the toothy funster himself, drawn by Dick Millington, whose work had graced four issues of Cheeky Weekly at this stage. Mini comic cover star Six-Gun Sam is on hand to deliver a wild west witticism, following which the toothy funster fulfils his contractual obligation to plug the comic, before an appearance by Teacher brings Cheeky's mini centre-spread gagfest to an end. 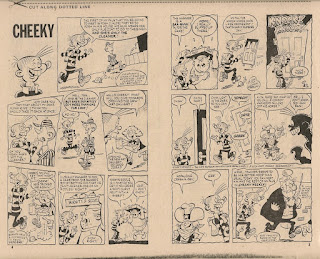 Thanks to hankshanklin whose question over at the Comics UK Forum caused me to realise I had omitted to cover this Cheeky mini comic.

All the mini comics posts can be found here.
Posted by Niblet at 15:27