Bubblegum Boy, still dangling from his chewy dirigible, makes a return to the cover (his previous front page appearance was on the 02 June 1979 issue) while below, Cheeky shares a joke with Gunga Jim, who last graced the cover as of the 17 March 1979 edition. Cheeky is holding a copy of The Sunday Snigger, but Jim's paper seems to be called simply Sunday. The space below the title suggests that Frank McDiarmid was intending to insert a title but maybe forgot, or inspiration wasn't forthcoming before deadline time.

Aged automaton 6 Million Dollar Gran is on the golf course this week. The scriptwriter's apparent confusion over Gran's robotic origin continues, as the caption in the final panel on page 2 refers to the synthetic senior citizen's 'computer-like brain'  It IS a computer! Gah! 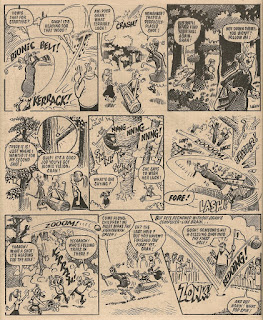 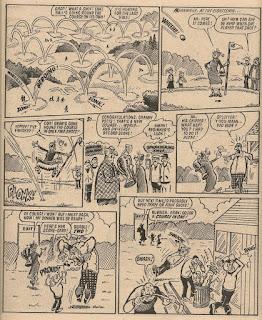 I suspect the artwork on the third Gran page above has been altered. The hatching at the bottom of the tweed jacket in the second panel of row 2 seems to have been added later, suggesting that the final panel has been moved to the right, probably to compensate for the removal of a 'Cheeky watching the 6 Million Dollar Gran closing credits' final panel which was the traditional conclusion during the period that Gran's adventures appeared as a TV show watched by the toothy funster. However, as examined here, the Cheeky's week framing devices were gradually dropped, with the final 'official' 6MDG link appearing in the 30 June 1979 issue (one later closing Gran link appeared, as a result of an error I suspect, in the comic dated14 July 1979).

Gran's golf gags put me in mind of similar links larks perpetrated by the mighty Norman Wisdom in his 1965 saga of feuding milkmen, The Early Bird. Norman, arriving at the golf course in the guise of a man of the cloth, disrupts the recreational tour of the greens planned by rival dairy owner, Mr Hunter (played by splendid comic foil Jerry Desmonde).

The What's New, Kids advertorial feature is this week devoted to books. I bought a copy of the 'Superman from the 30s to the 70s' collection which is among the publications being promoted, and parts of it proved to be an interesting reading experience due to the pages being assembled in the wrong order. 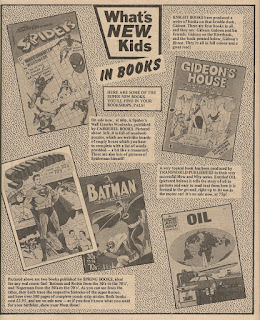 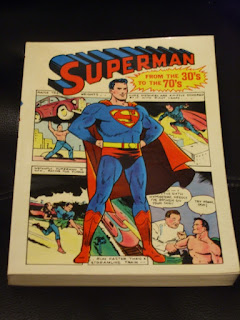 Barry Glennard stands in for regular Elephant On The Run artist Robert Nixon this week. Yahglubb (uttered by The Man In The Plastic Mac as he's smothered in cement) is another word you only ever see in comics.

Disaster Des causes a crash in the housing market...


Also enjoying a colour adventure is Calculator Kid. This is one of those rare occasions when Calculator's electronic scheming turns out less than optimally for Charlie.

There are two pages of Chit-Chat letters this week. Reader Amanda Bullock asks for a Pin-Up Pal poster of Cheeky. The toothy funster omits to mention in his reply that he was the subject of a double-page centre spread poster way back in Cheeky Weekly number 1, but he does allude to an upcoming event of the cut-out-and-keep variety. 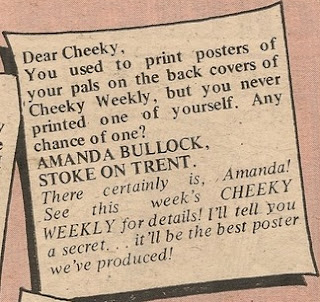 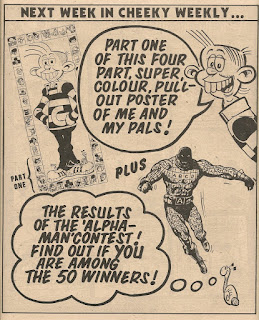 Cheeky Weekly readers had been invited to send in their guesses as to the Alpha Man's true identity in the 16 June 1979 Disco issue.


On Saturday our toothy chum is laid low by a severe case of the sniffles. Doctor Braincell is evidently not available, but after being visited by a selection of his chums, our pyjama-d pal perks up as Dad prescribes this week's Cheeky Weekly (and the cover of the comic in the clutches of our sniffly mate is indeed that of this very issue). I'm sure the fact that Cheeky will already know all the jokes he told this week won't stop him from enjoying a chucklesome read. 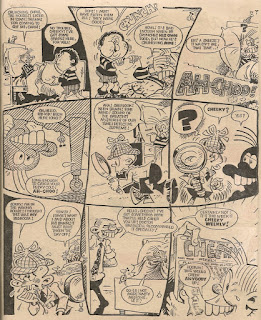 Back cover strip Snail Of The Century was never linked to a specific day of the week. If we assume the events depicted below to have occurred after those seen on Saturday above, it appears Cheeky was cheered up enough to emerge from his bed, although clearly still not firing on all cylinders.


This brings to a conclusion a pleasingly all-Frank-McDiarmid Cheeky's Week, the second such issue in a row.