IPC, publishers of Cheeky Weekly, were on occasion so keen to broaden the circulations of Cheeky Weekly's companion titles that they couldn't resist cramming more than one comic into s single ad. Let's have a look the promotions of this type which appeared in the pages of the toothy funster's comic...

The first such sales-boosting drive appeared in Cheeky Weekly dated 03 December 1977, wherein our grinning pal's ugly fizzog was seen looming above a page consisting of what we must assume IPC felt were among the strongest representatives from three of their other titles; Krazy (the comic which spawned the Cheeky phenomenon and where the toothy funster was concurrently appearing), Whoopee! (the paper that would offer refuge to the ragged band of Cheeky Weekly survivors who emerged from the wreck of the toothy funster's title when it foundered in February 1980) and Whizzer and Chips (IPC's famous '2-comics-in-one'; a gimmick that would later be shamelessly appropriated by Cheeky Weeklyitself). It's curious that IPC didn't include in this ad their longest- running humour/adventure comic of the period, Buster. Maybe it was felt that Buster wasn't in need of any additional marketing at the time, and the fact that the title not only outlived all the comics featured in this ad, but survived to the year 2000 rather bears out this opinion. Buster also remained aloof from 1979's Star Guest promotion. 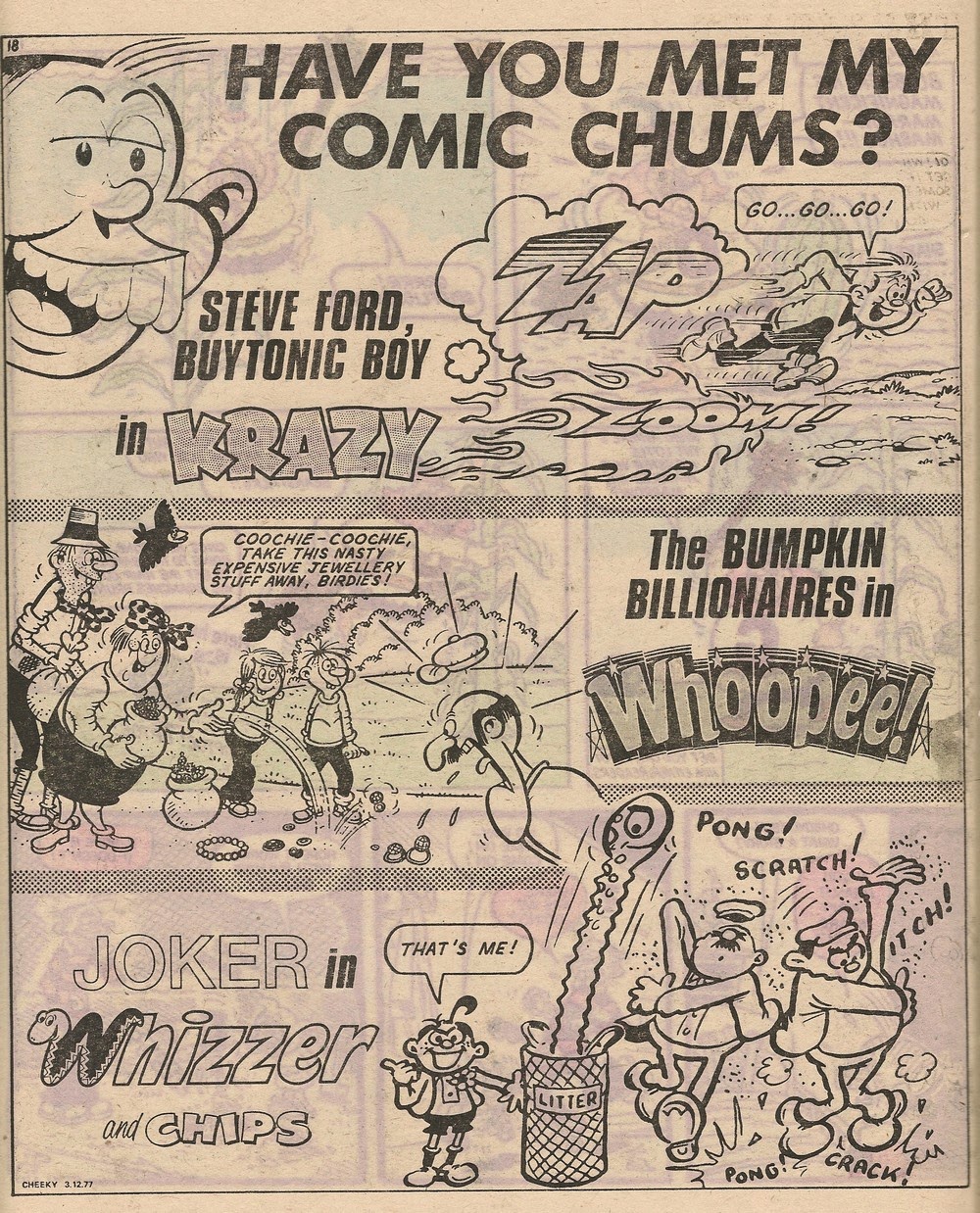 Unlike the rest of the ads we'll be examining here, the above publicity material wasn't linked to any particular promotional drive, it seems it was just designed to expose Cheeky Weekly readers to the fun to be had in some of the other IPC product lined up alongside their favourite title on the newsagents counter.

In the issue dated 07 January 1978 the same three comics got a further boost as a new ad alerted readers to the commencement of cut-out Spotter Books in those titles. Cheeky Weekly had of course commenced its own Spotter Book of Fun that week. The Whizzer and Chips Spotter Book of Wheels sounds extremely tedious, but I suppose it ties in with that comic's Whizz Wheels character. 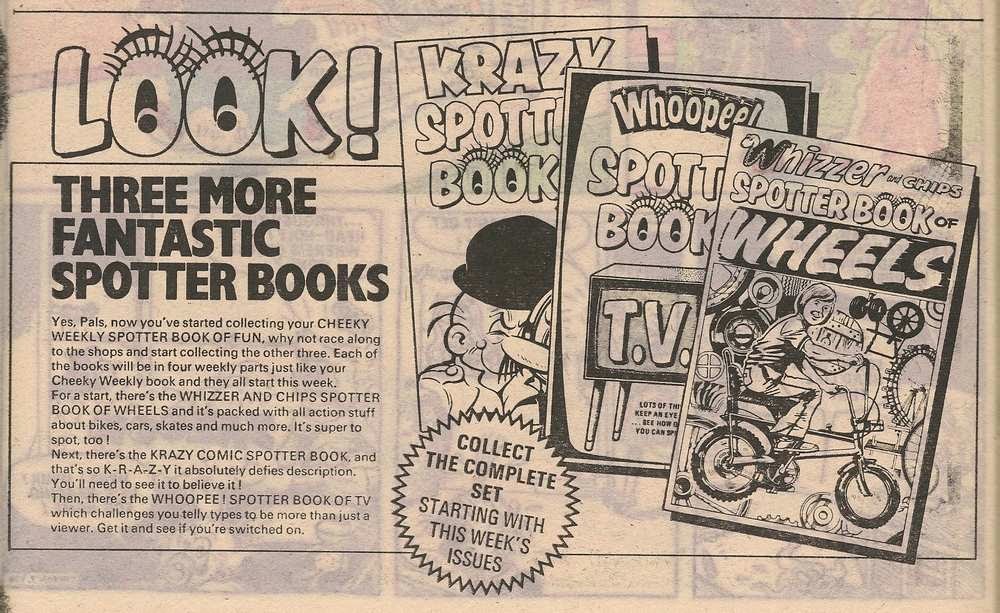 A week later the Spotter Book promotion, and the 3 other participating titles, got another mention presumably as a reminder to any kids who last week purchased an extra title or two with the intention of completing extra cut-out books. Added to the already established scheme is additional inducement to keep purchasing, in the form a a teaser for a 'Great Competition' which is 'coming soon'. Quite which comics this applies to is not made clear. 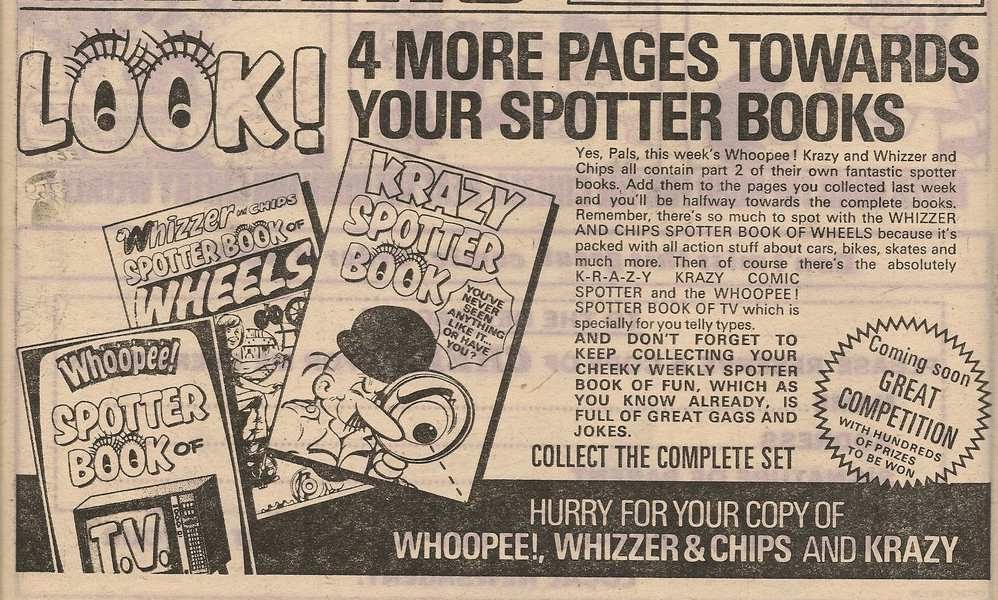 A fortnight later the same comics, now styled 'The Funtastic Four' (with Buster again conspicuously absent from the line-up), were given a further promotional push to coincide with the final instalments of the booklets. The same characters are given prominence in the blurb as were in the 03 December 1977 ad. Oddly crude dummy renditions of the comic covers are on display. 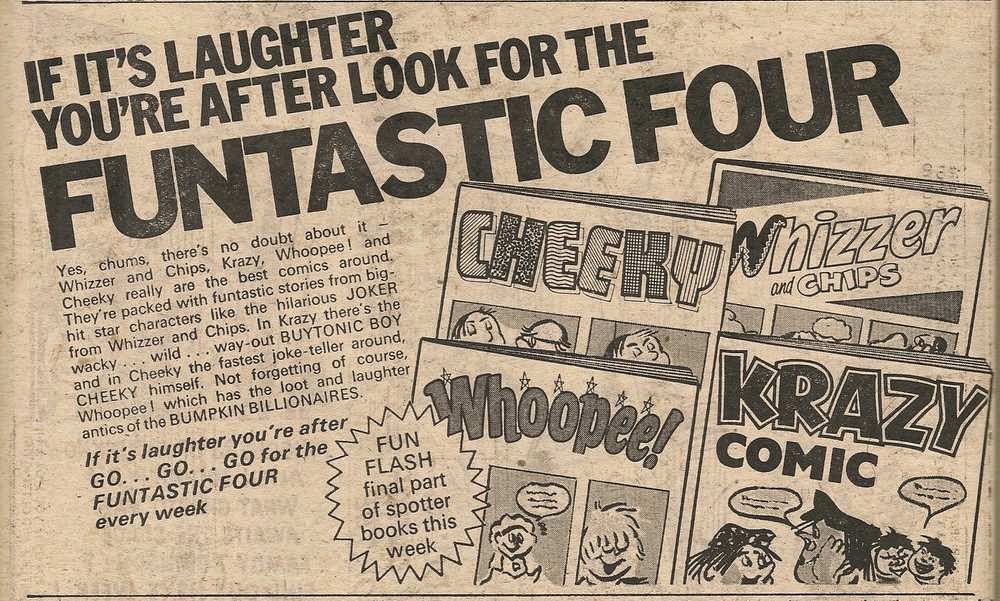 In the 24 June 1978 issue was an ad encompassing no less than 5 titles - Buster (surprise!), Whizzer and Chips (which had of course by this time absorbed Krazy), Cheeky Weekly, Mickey Mouse and Whoopee!. The cause of this comic cavalcade was the imminent appearance of condensed versions of these titles within their companions in a promotion that would rotate across the participating comics over a four-week period. 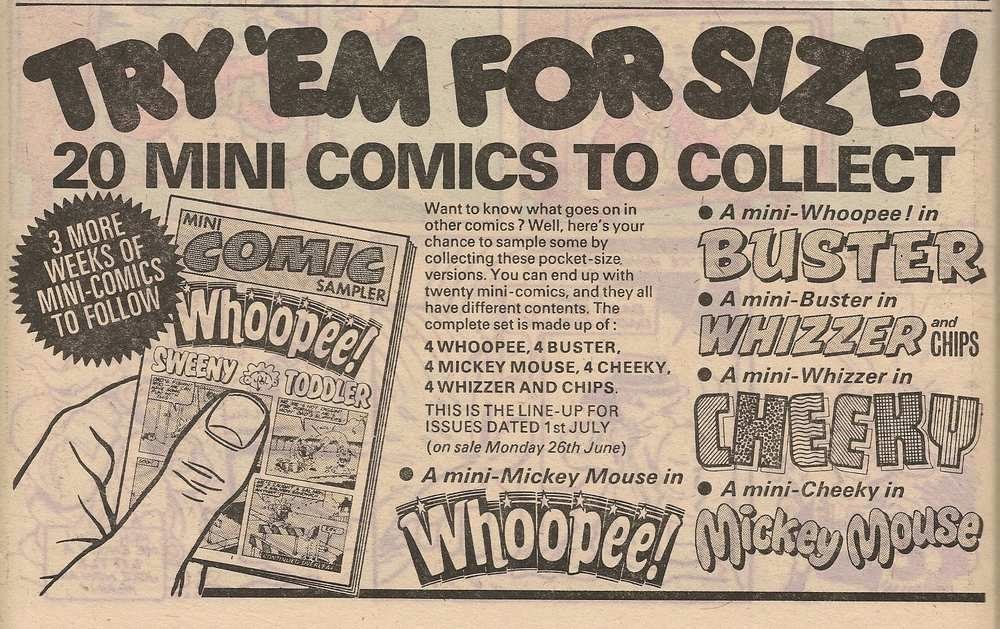 Cheeky directed readers towards the forthcoming Mini-Comics schedule in the following week's issue. 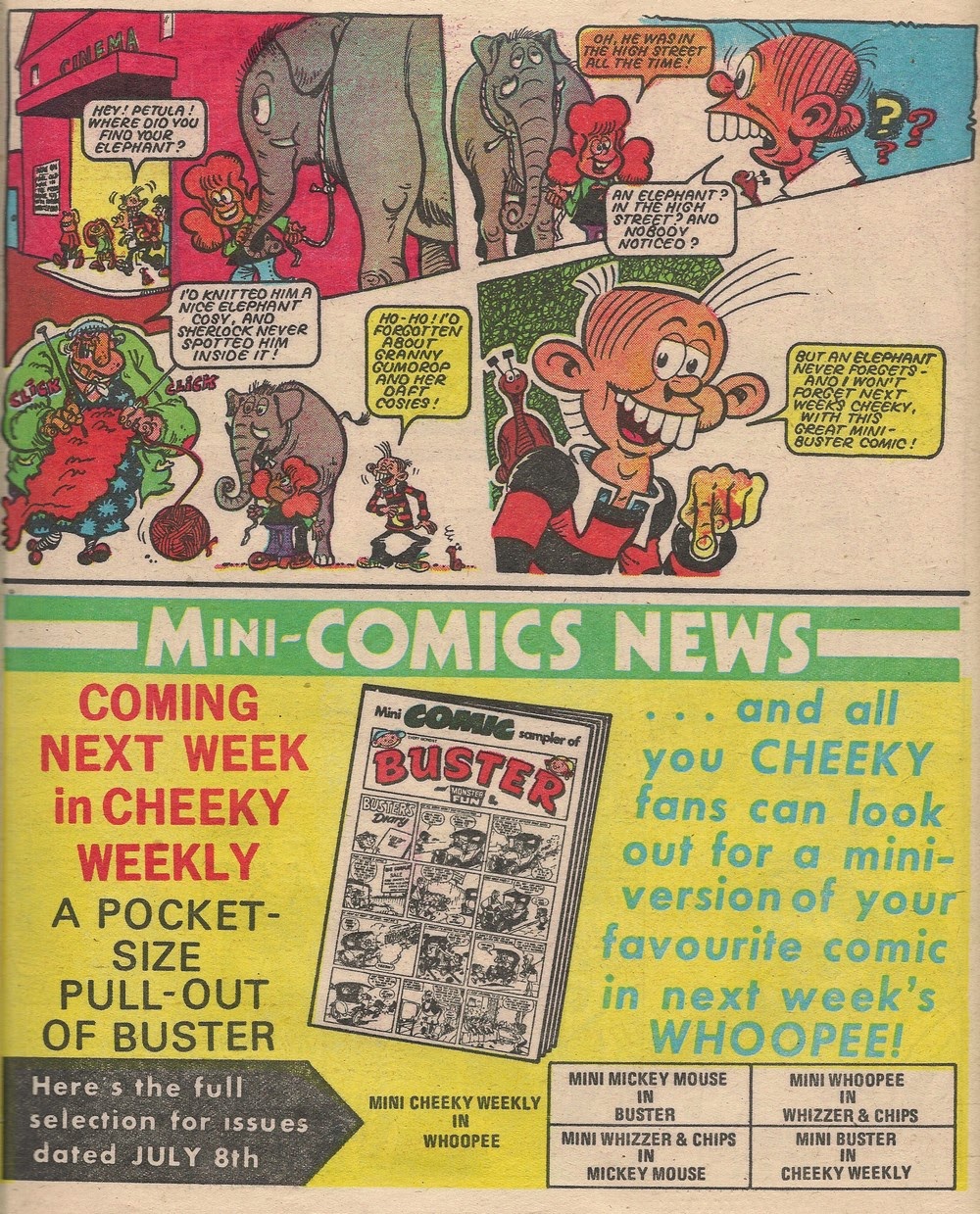 Anyone left in suspense by the cryptic reference to the impending competition in the 14 January comic were no doubt relieved to read the announcement of the 5 Papers Competition in Cheeky Weekly dated 15 July 1978. 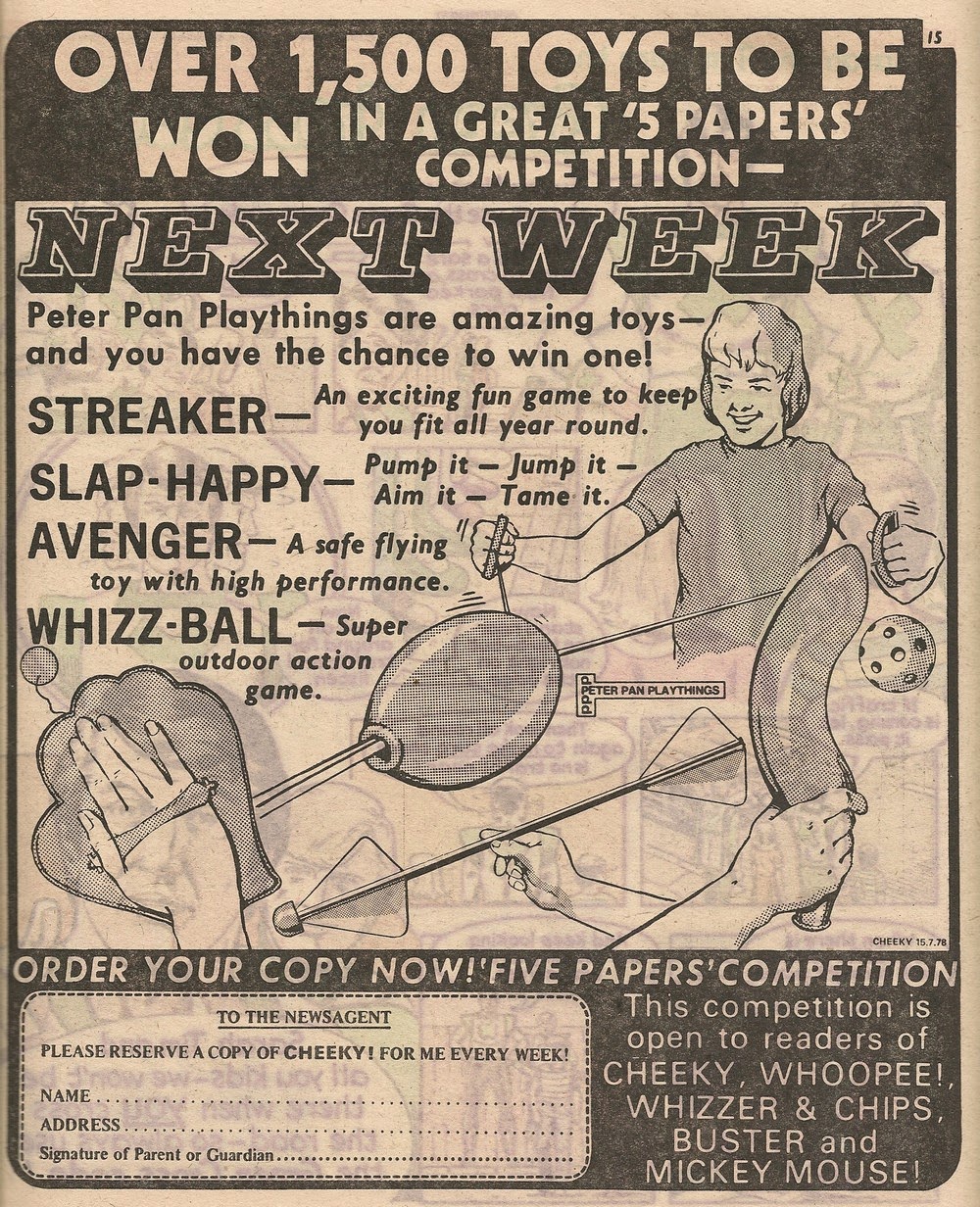 Later in the same issue was another schedule of upcoming mini comics, once again introduced by the toothy funster. 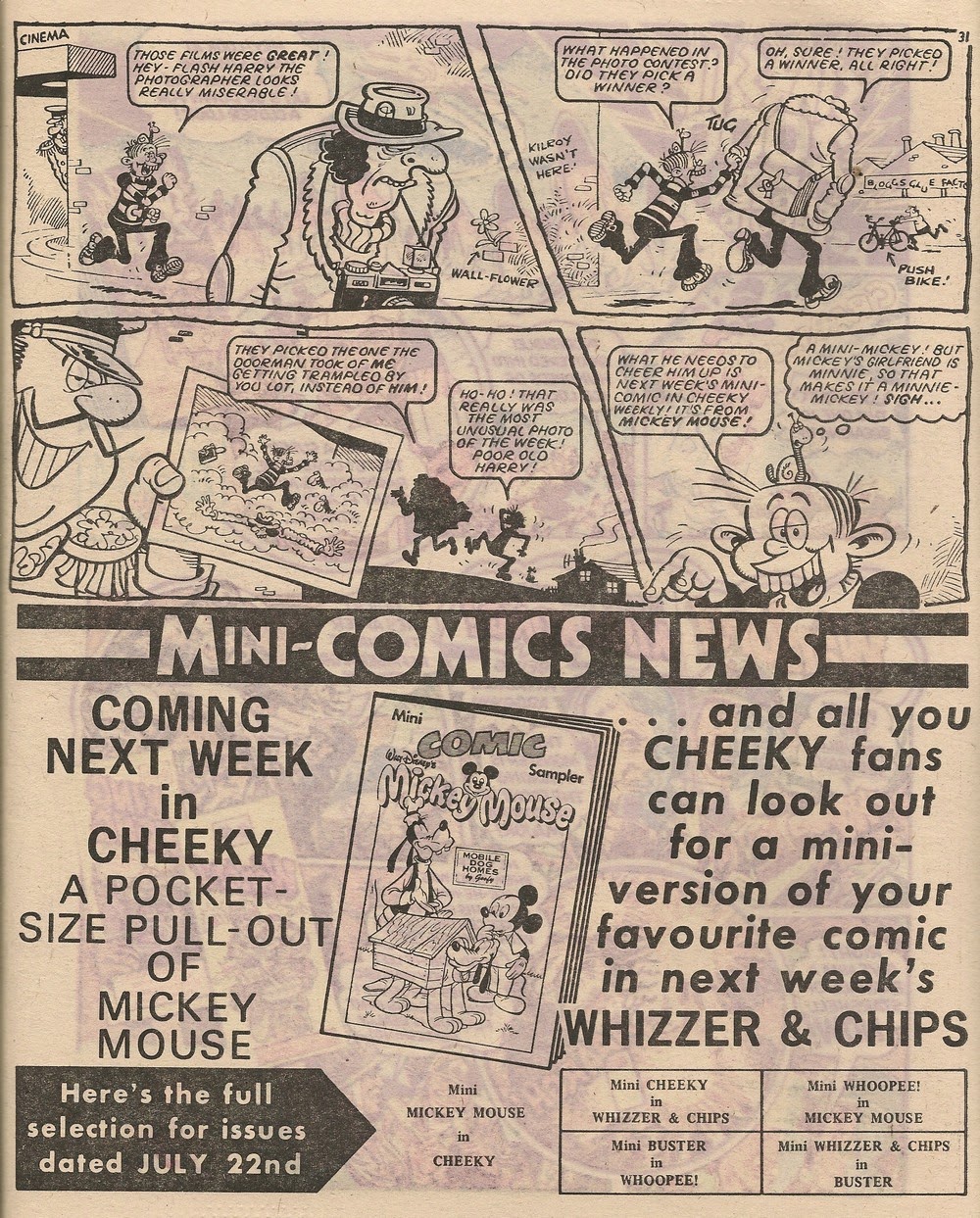 By the 26 August 1978 issue Buster had resumed its standoffish attitude and was absent from the titles participating in the forthcoming toy competitions and simultaneous cut-out-and-keep promotion. 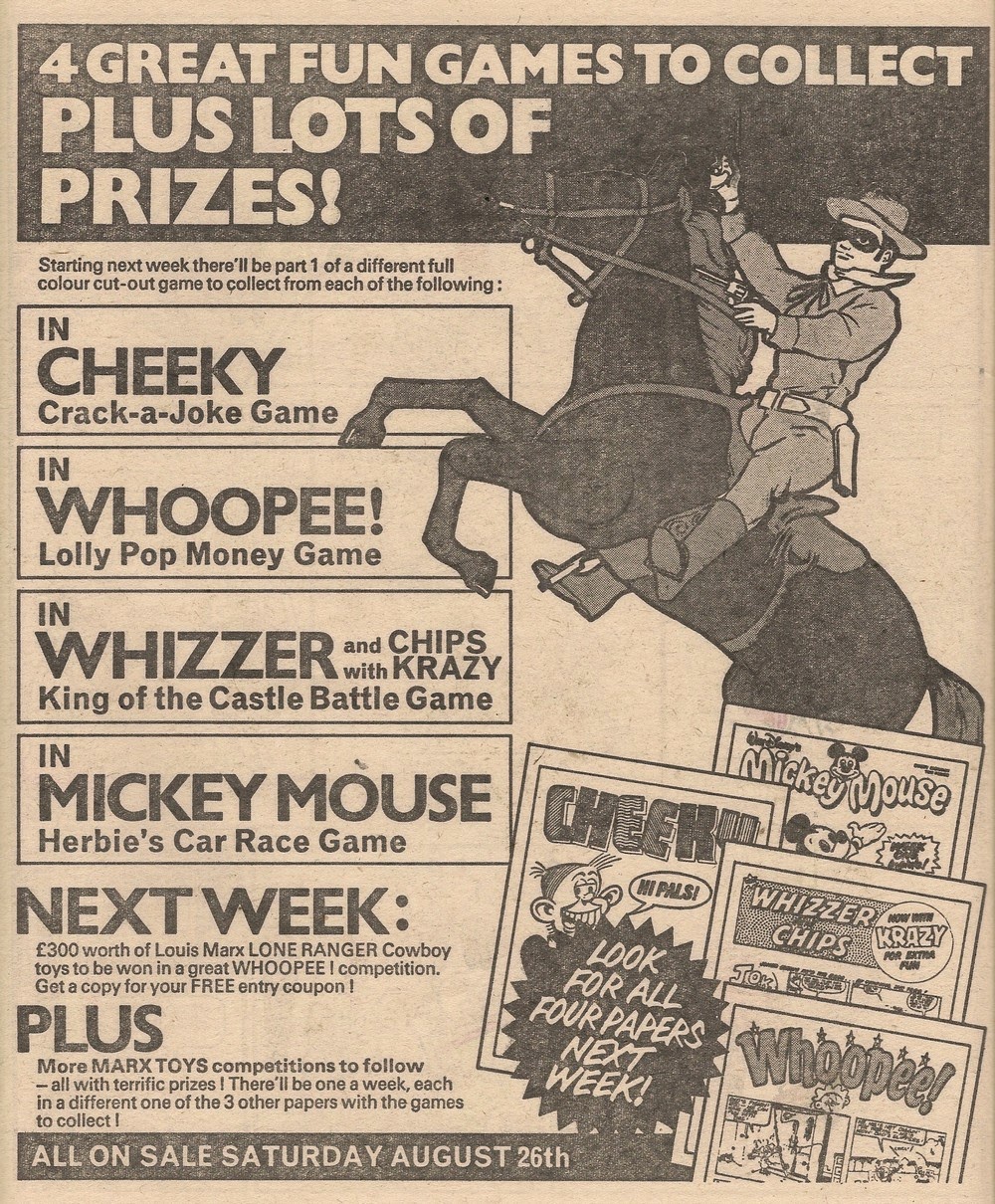 A variation on the same ad, featuring a reversed masked hero, appeared 7 days later. In addition to publicising the commencement of the cut-out games, the ad reminded readers that Whoopee was that week running the first of the four toy competitions. Lone Ranger toys were on offer, but the TV Western boom of the 50s and 60s was long-forgotten by this time, so the decision to market a range of action figures based on the masked man and his Native American pal at this particular juncture is a bit puzzling. 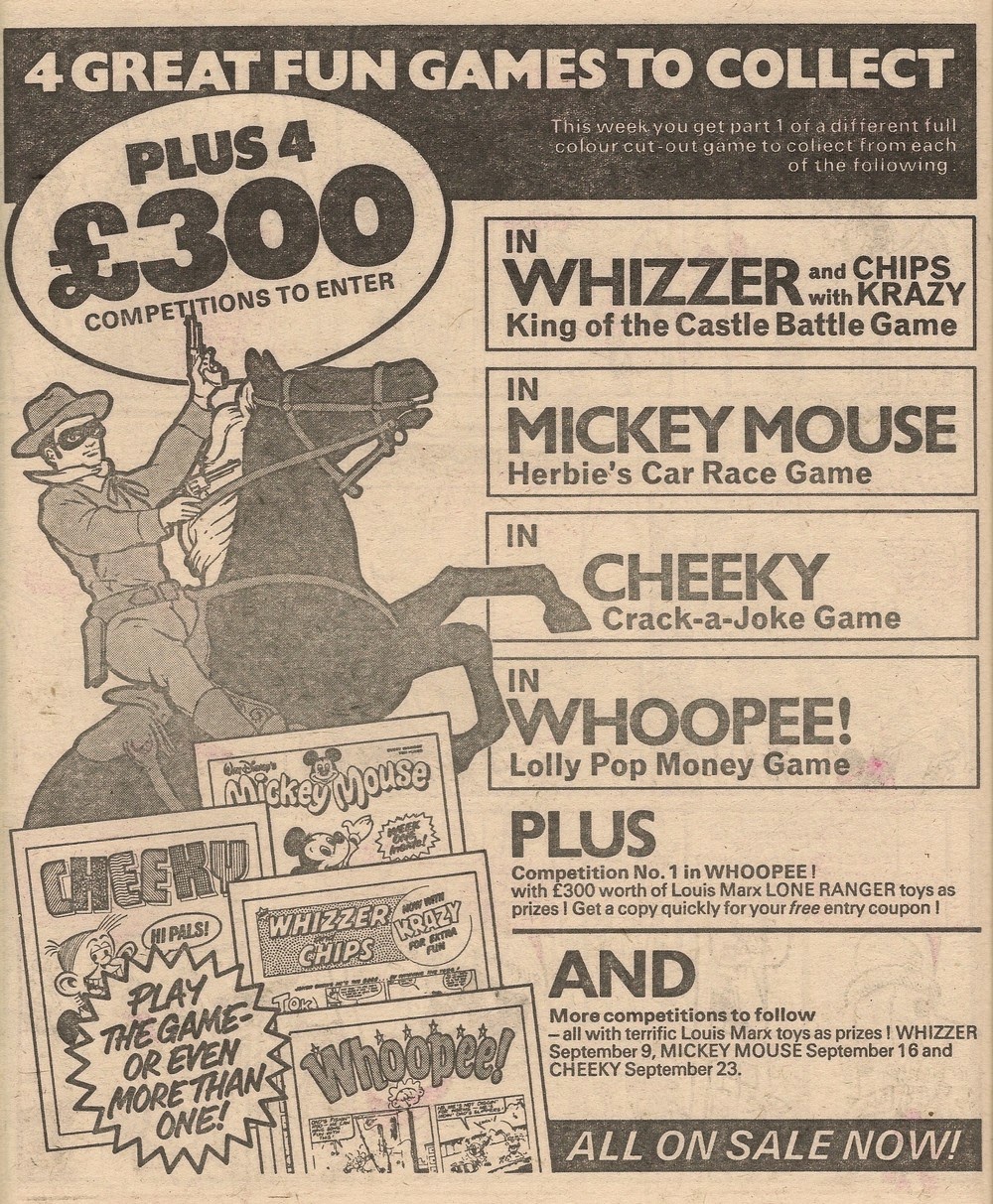 Whizzer and Chips was the location of the toy competition the following week. The lucky winners of the 10 star prizes would each receive a Clash of the Robots game.

It seems there was a space that needed filling in Cheeky Weekly 7 days later as an ad promoting our grinning pal's comic together with Whizzer and Chips and Whoopee (oddly Mickey Mouse, the location of that week's toy competition, wasn't mentioned) found itself squeezed into page 31 alongside the concluding element of Saturday, the instructions for the Crack-A-Joke Game and a stamp-collecting ad (please tell your parents). 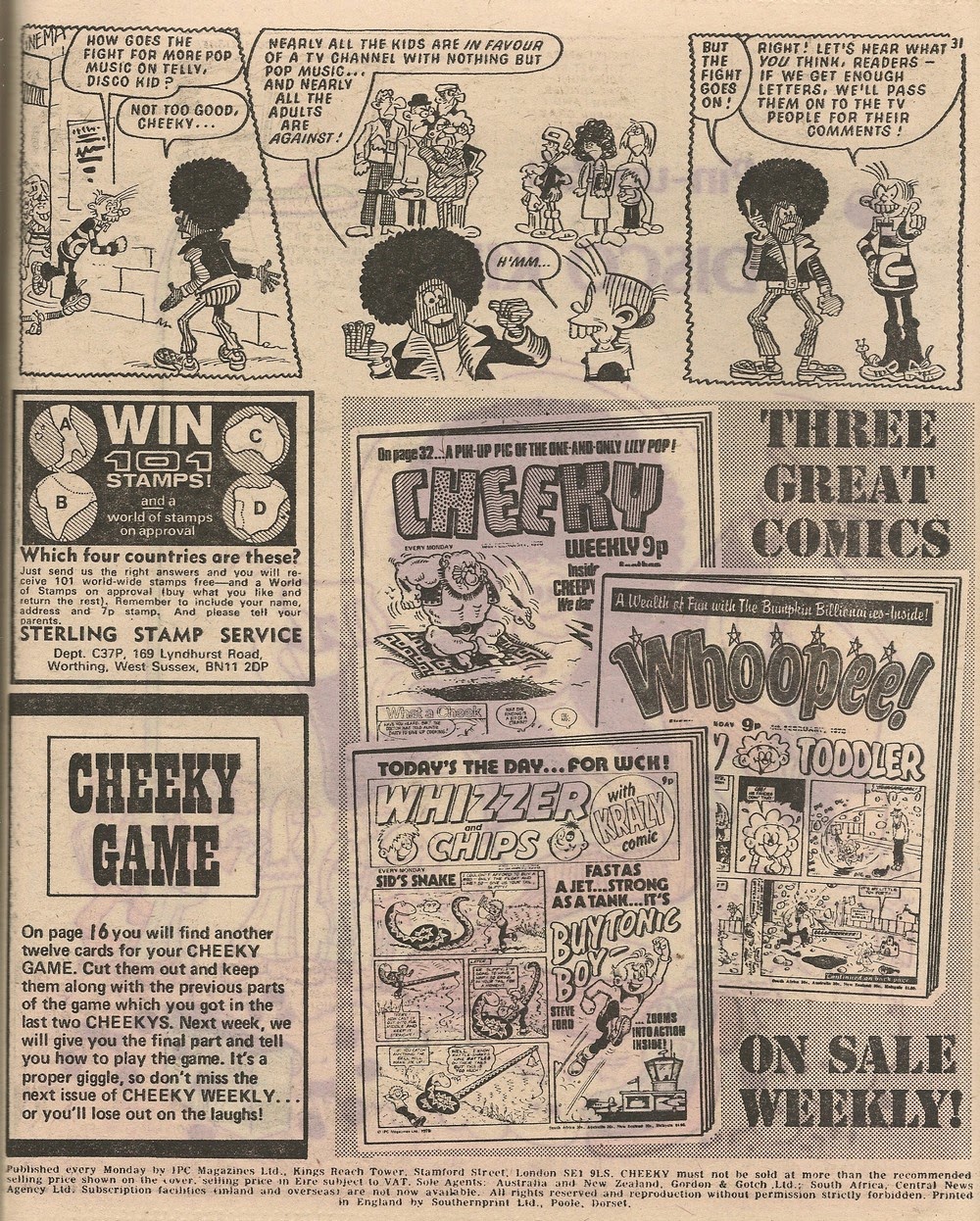 IPC were at this time clearly convinced of the effectiveness of the cut-out-and-keep marketing ploy, as little time seemed to elapse without readers being encouraged to cannibalise their reading matter. Thus it's little surprise to find that as 1979 dawned another multi-comic ad turned up in Cheeky Weekly (dated 06 January), heralding further upcoming scissor-paste-and-cardboard action in the big 3 humour titles. Buster yet again exempts itself, as does Mickey Mouse. 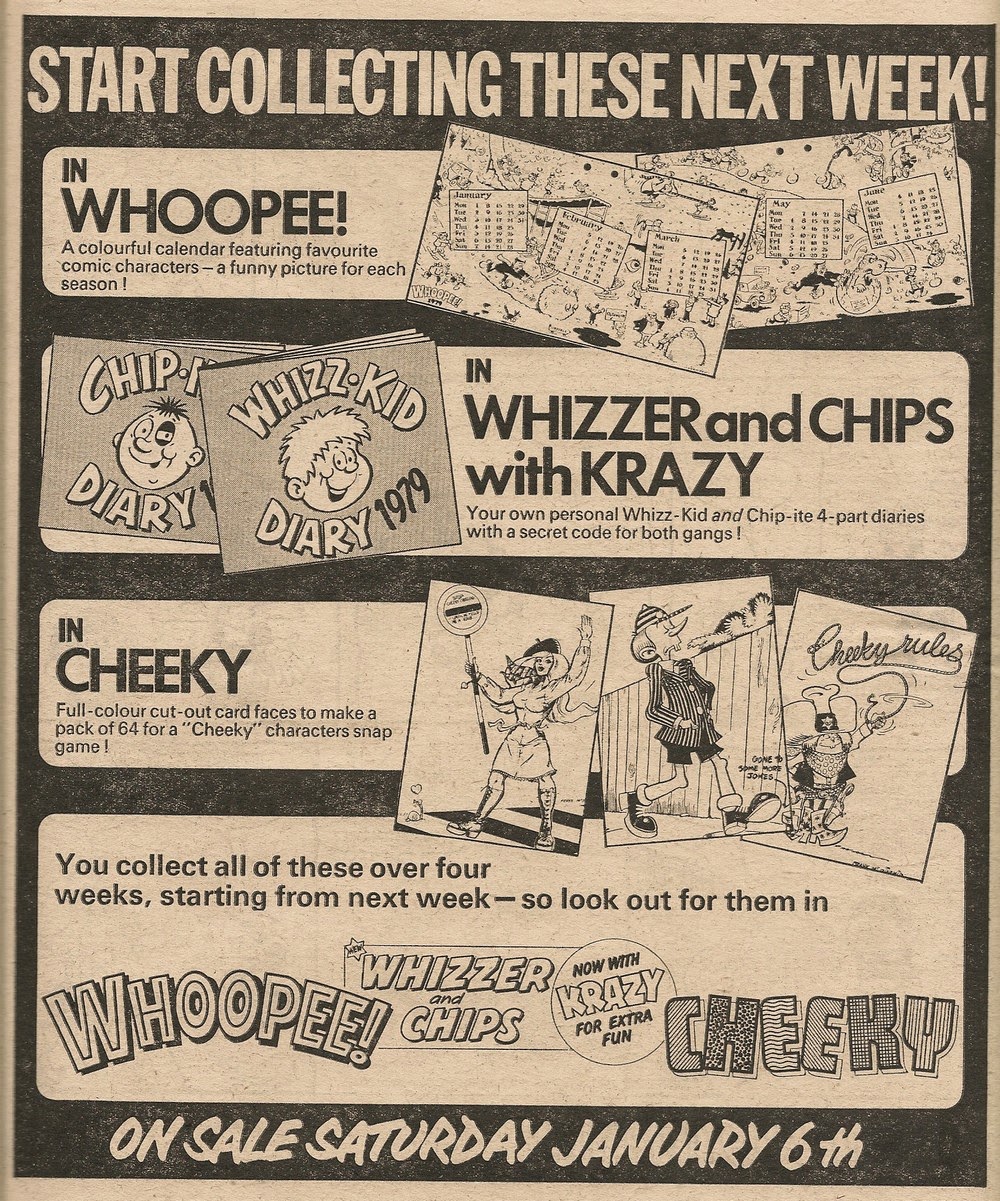 As we've come to expect, the message was reinforced 7 days later to coincide with the commencement of the promotions. 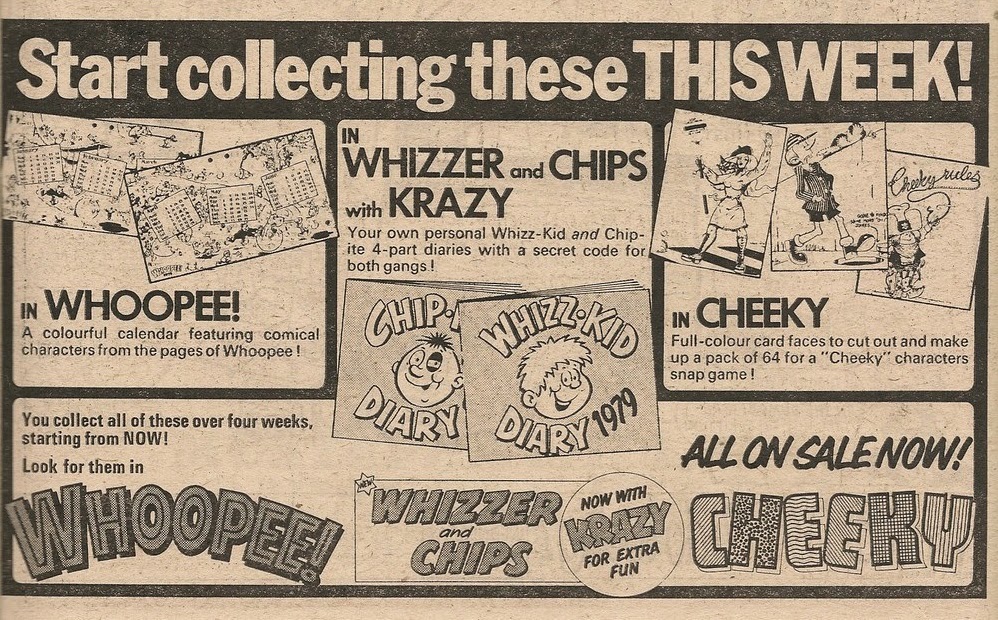 Friends of Cheeky who were so inclined would have been sharpening their scissors on learning, in the comic dated 31 March 1979, that '3 Super Pull-Outs' with a 'pop' theme were due to commence the following week, one in each of the usual 3 titles. Sweeny Toddler and the Bumpkin kids are again on hand.to assist with the publicity drive. 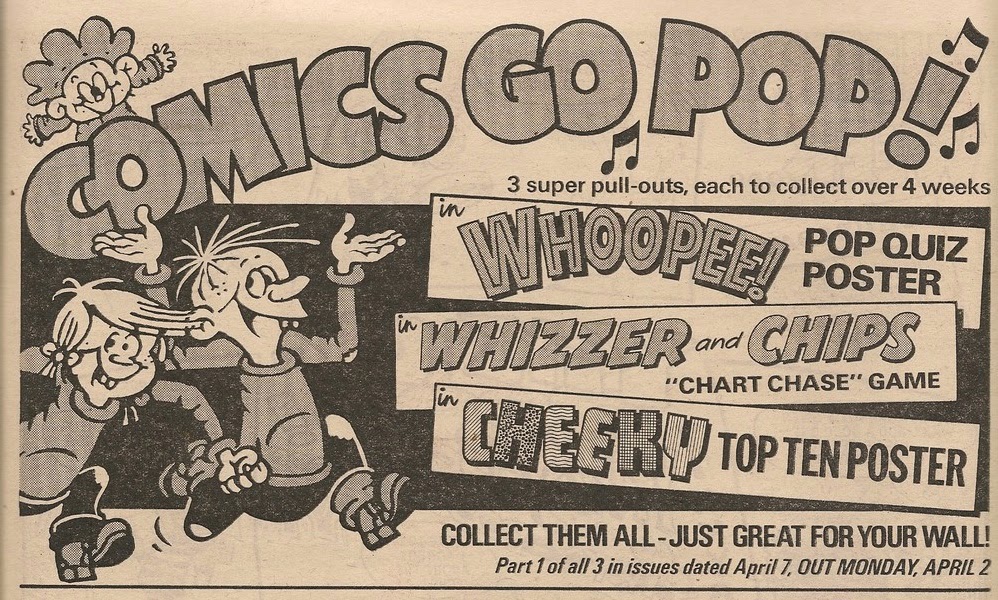 The usual rehash of the initial ad appeared the following issue.... 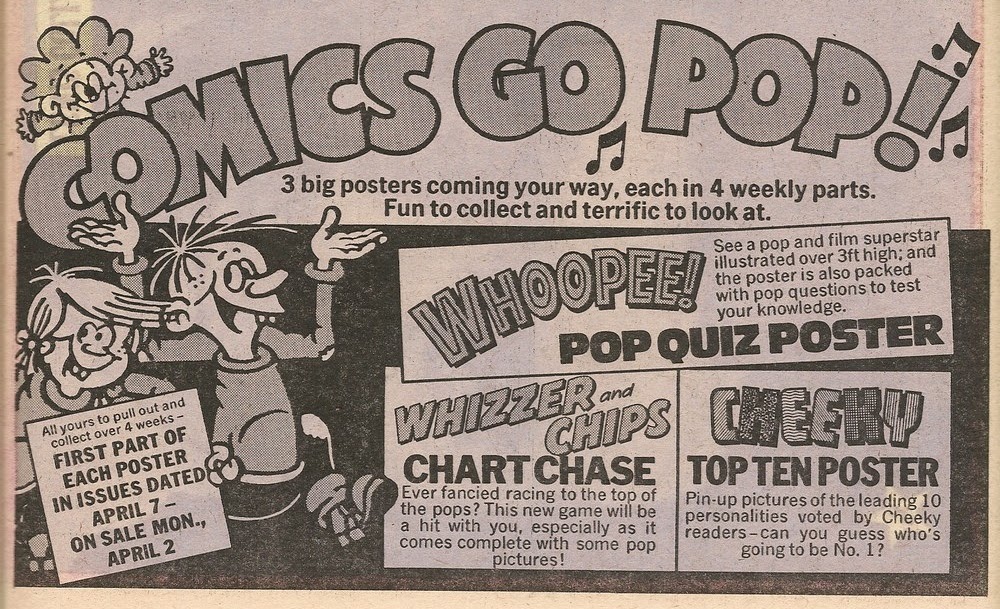 ...and a somewhat more radical refashioning, in which the Sweeny/Bumpkin collaboration was replaced with a generic popster who looks to me to have sprung from the pen of Arthur Martin, was printed in the following edition... 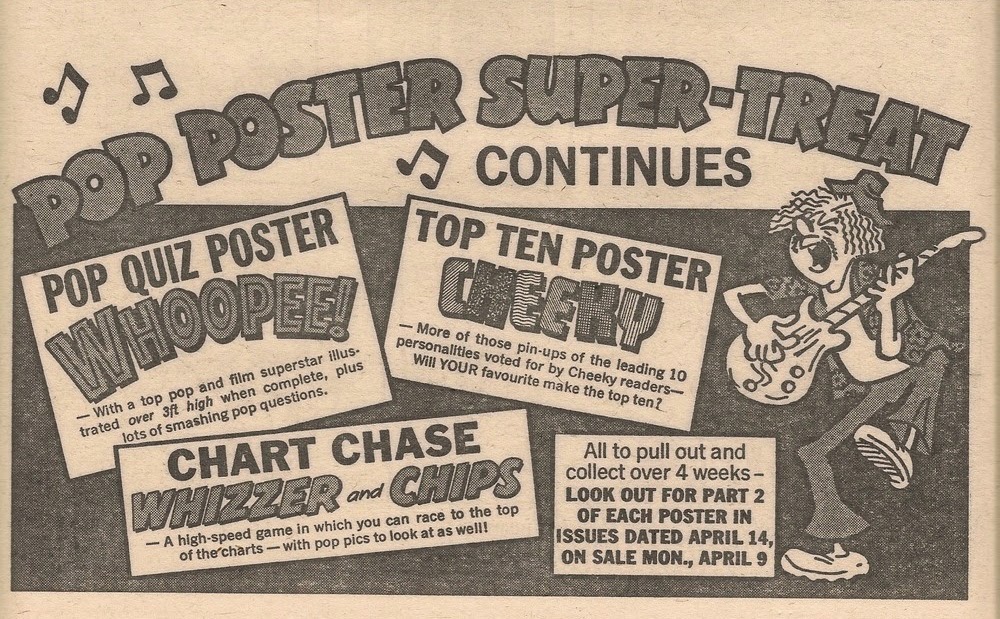 Buster (which had absorbed Monster Fun since it last participated in a multi-title promotion) made a surprise reappearance (along with Mickey Mouse) in the multi-comic ad in Cheeky Weekly dated 21 April 1979, announcing that sachets of milkshake would be given free in each of the featured titles over coming weeks. And - what a surprise - a cut-out feature would commence in each drink-powder-bearing edition! 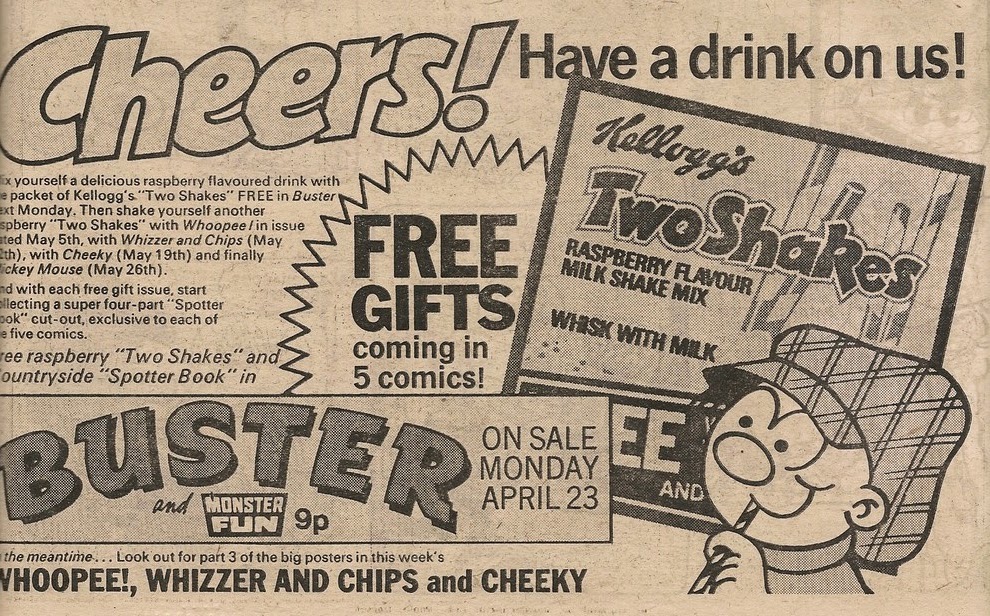 The follow-up ad in the next edition was expanded to fill a whole page. 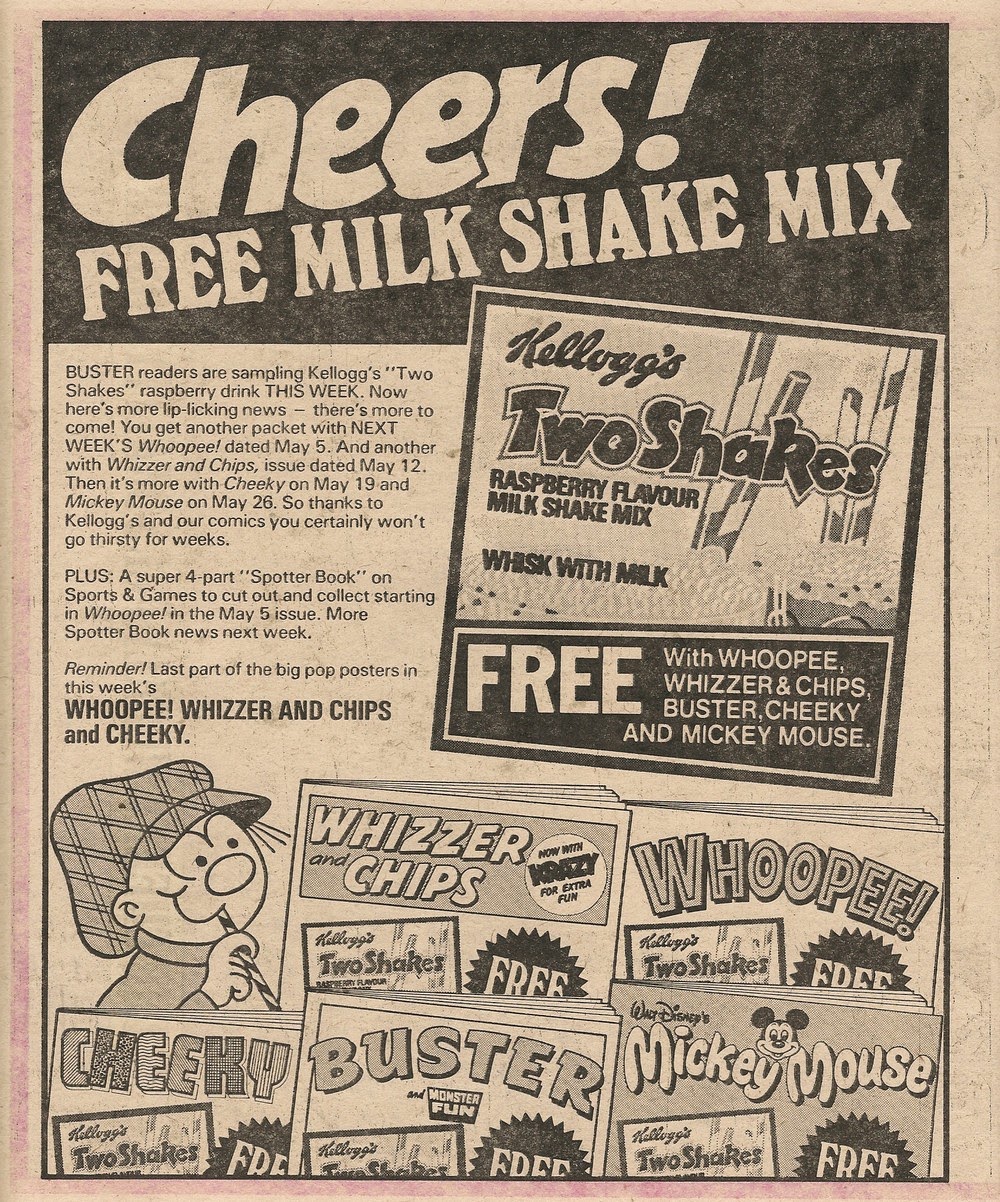 By 05 May 1979, the milkshake boat had sailed as far as Buster was concerned so it's no surprise that young master Capp's title is absent from another full-page follow-up ad in which Sweeny and the junior Bumpkins have been replaced by two representatives of the target audience. 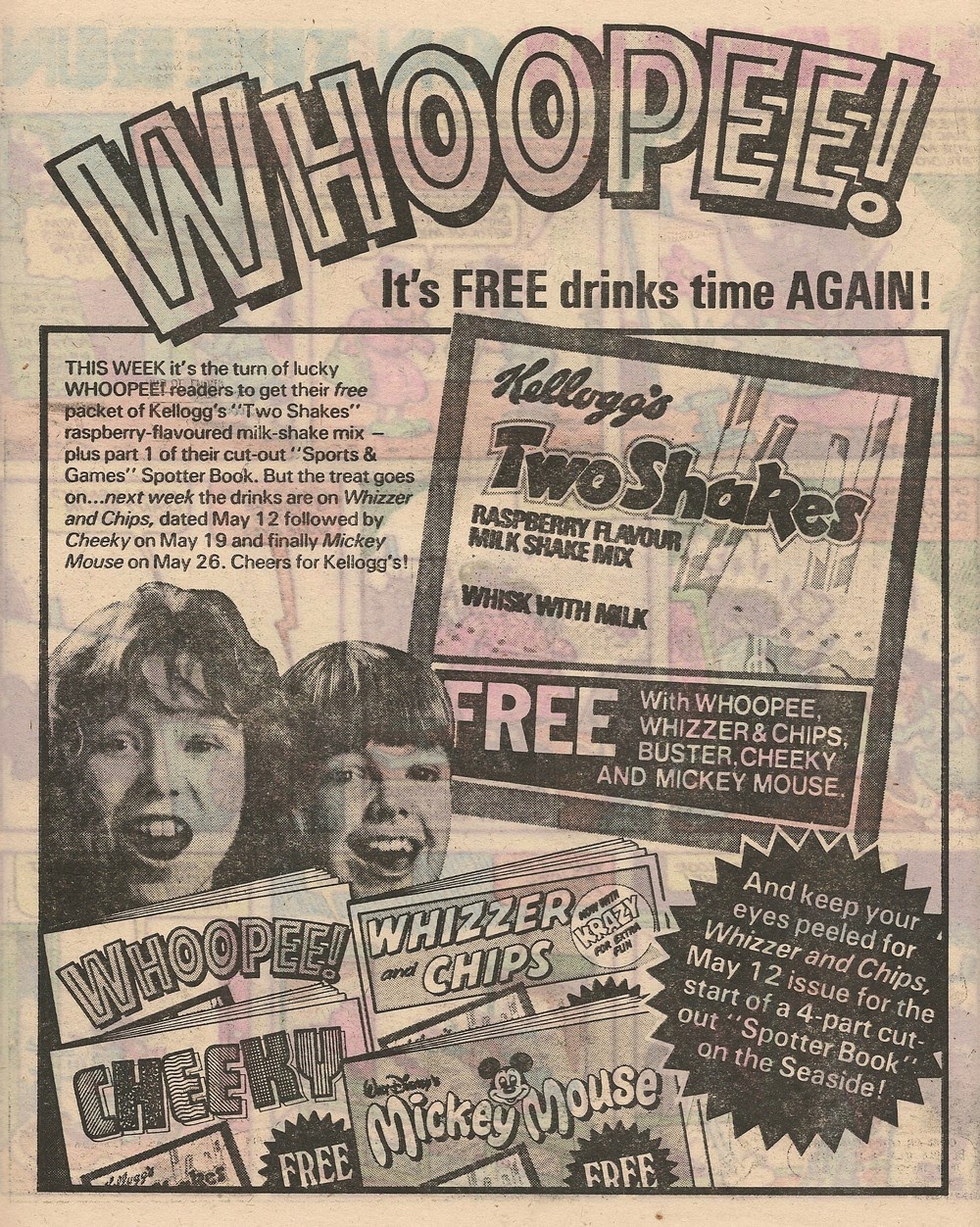 By the third week of the Two Shakes promotion, the reinforcement ad was reduced to a half page since there were only 3 comics still to provide thirsty comic consumers with flavoured powder for their lactic libations. The same two readers' representatives were featured. 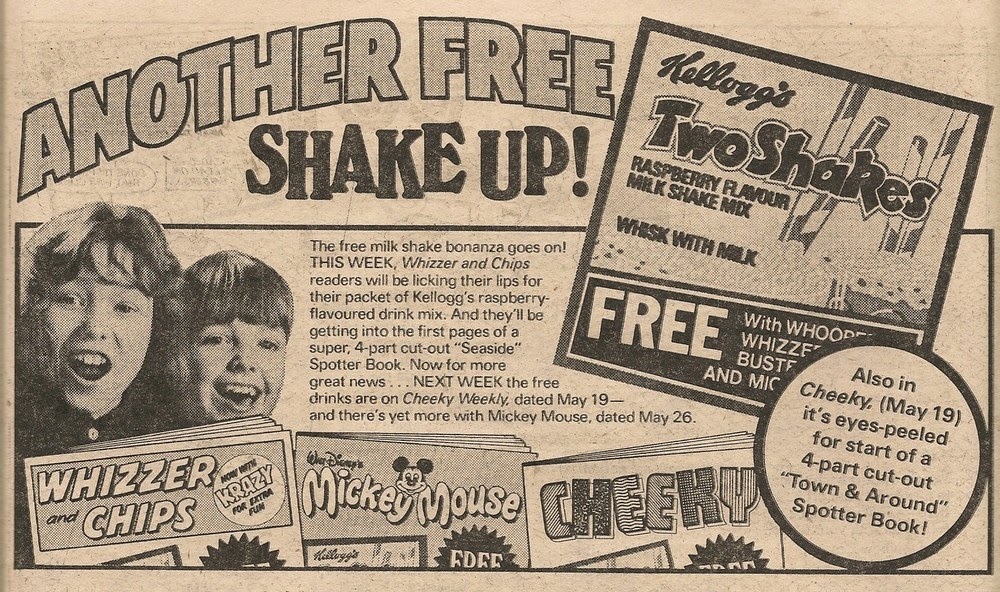 It's a little surprising that IPC chose to launch a new humour/adventure comic at this time - Jackpot – in competition with their own milkshake and cut-out promotion running across more established titles.

The next 'multi-comic' ad didn't strictly relate to comics – as Christmas 1979 drew thrillingly close, many Cheeky Weekly readers will no doubt have left their favourite reading material conspicuously open at page 8 of the 15 December comic, in the hope of finding one or more of IPC's humour annuals under the tree on the 25th. 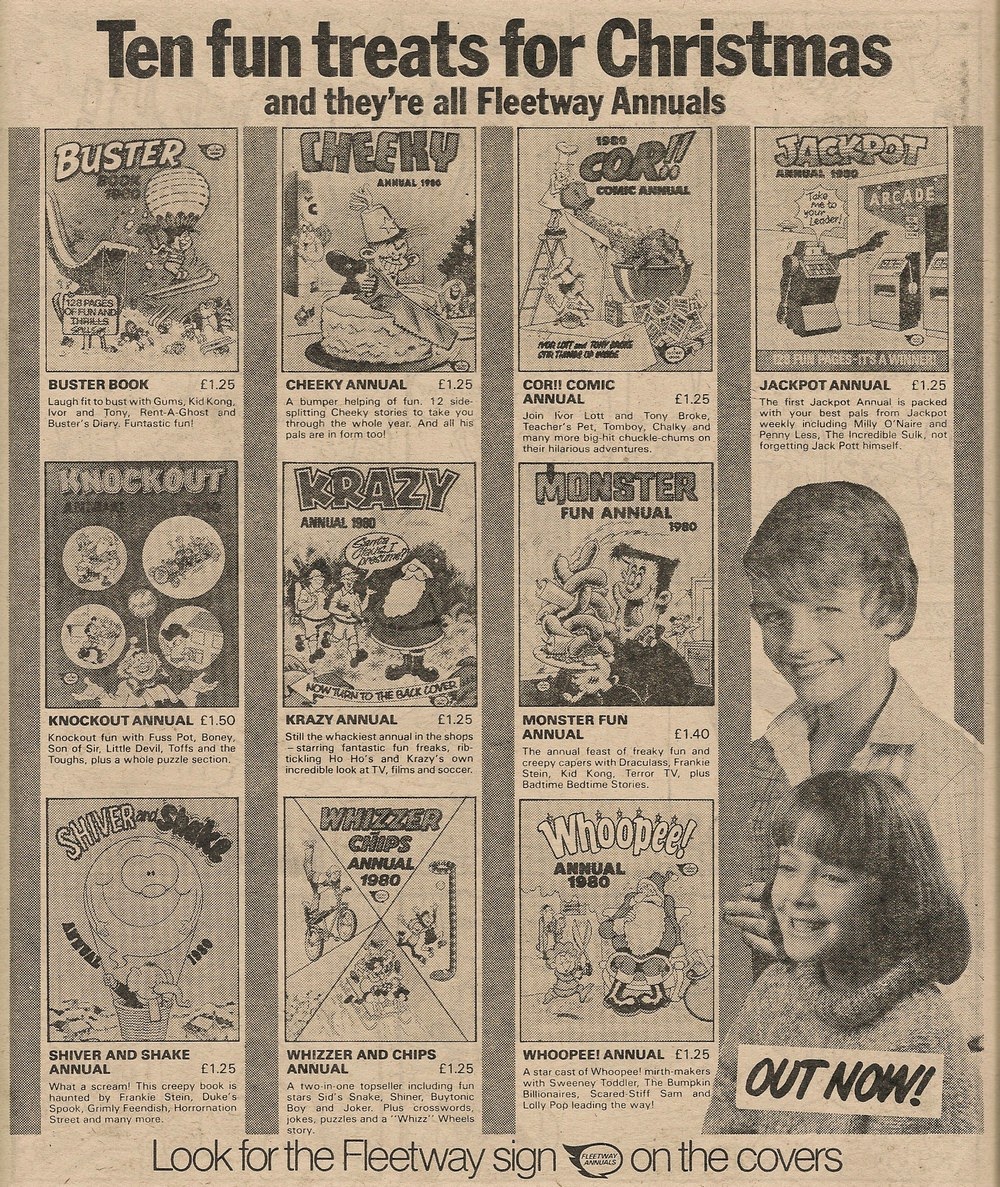 Page 27 of the same issue carried news of yet another imminent competition running across the familiar 5 humour titles (Jackpot is absent). 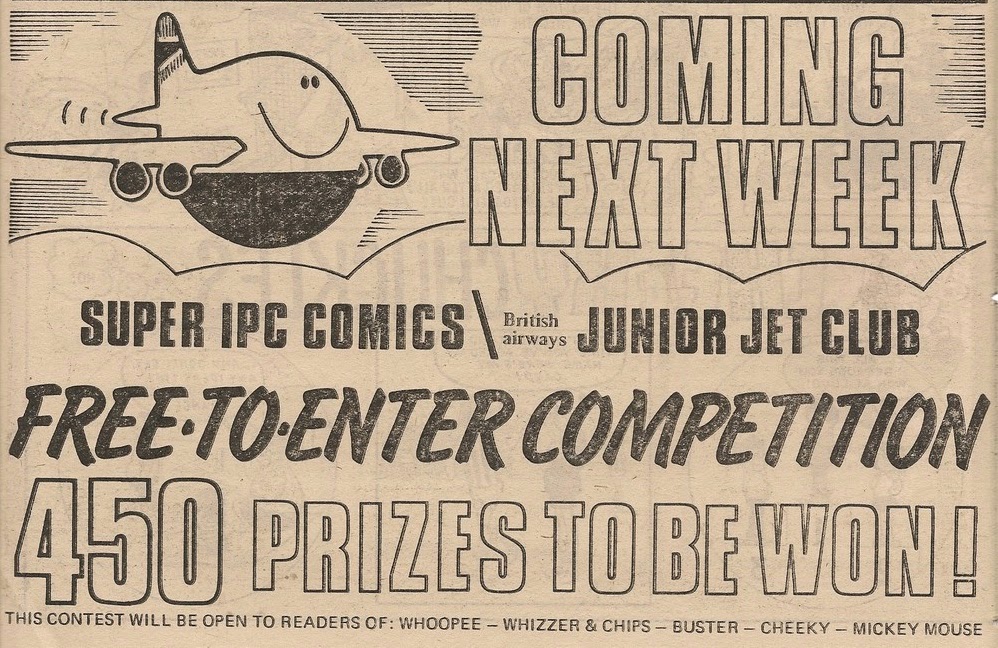 This was to be the last multi-comic ad in Cheeky Weekly which, despite participating in all the cross-comic promotions detailed above, evidently failed to establish satisfactory circulation figures and came to an end just a few weeks later with the issue cover-dated 02 February 1980.