A week after the issue in which ex-Cheeky Weekly characters suffered and executed raids, Calculator Kid fell victim to Whizz-Kid intrusion. See if you can spot the uninvited guests, then scroll down for the official announcement.

...Nobby and his spherical sidekick, Odd-Ball.

This was clearly a revenge mission, and sees the ex-Cheeky Weekly characters fall slightly behind as their raids now total 3, while the 'rest' have clocked up 4 incursions into the pages of our Cheeky-related pals.

Despite the fact that Calculator Kid and Odd-Ball are both drawn by the mighty Terry Bave, the depiction of Nobby in the CK story above is actually a copy-and-paste job sourced from the 30 March 1985 issue of Whizzer and Chips... 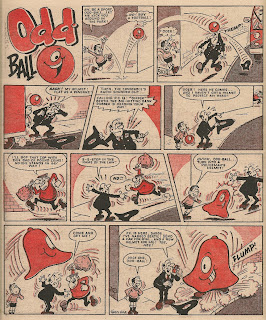