A couple of people have contacted me recently via the email address at the top of the blog to say they have had difficulty in submitting comments. I decided to do a test - I tried sending comments to this blog while signed in to another of my Google accounts, and also anonymously. The 'signed in' attempt worked fine - the CAPTCHA request appeared as expected and contained a number, so was easy to copy. The first anonymous attempt failed (my comment disappeared when I clicked 'publish' and the expected CAPTCHA failed to appear), but on the second anonymous attempt I was thwarted by a CAPTCHA containing a totally illegible component, as in the example below. 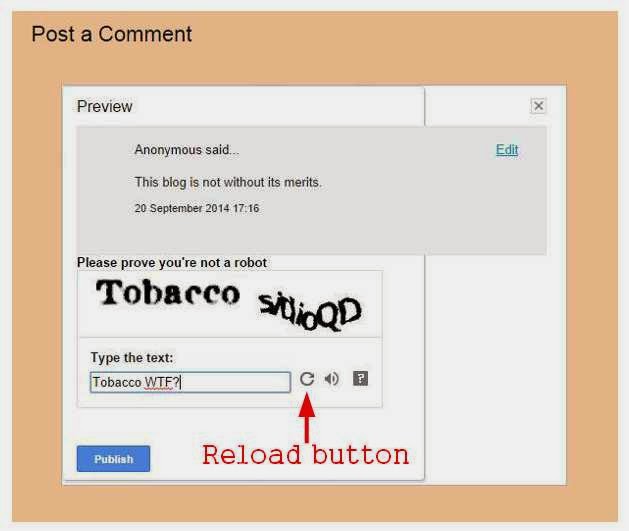 I'm sure the people who reported they were unable to submit comments are seasoned internet users and will already be aware of this, but for the benefit of others I just thought I'd mention that if you're confronted by a totally confounding CAPTCHA as above, you can generate a new one by clicking the reload button to the immediate right of the box into which you type the CAPTCHA text. Alternatively, you can click the audio button next to the reload symbol, which will generate a CAPTCHA that you will hear via your speakers/headphones, but I've always found these to be even less decipherable than the text ones.

Anyway, the reloaded text CAPTCHA was reasonably clear so I was able to submit a comment without being signed in on the second attempt. All comments sent to the blog are moderated so will not appear immediately. Once a comment has been submitted a message will appear reading 'Your comment will be visible after approval'.

It seems from my brief experimentation that when signed in and submitting a comment, you'll be presented with an easy CAPTCHA of the numeric variety. If you successfully negotiate the CAPTCHA, you'll see the confirmation message as mentioned above.

The first attempt to submit an anonymous comment will not generate a CAPTCHA so will fail (thus the confirmation message will not appear) and on the second anonymous try the more challenging text CAPTCHA will appear. I'd therefore suggest signing in before commenting if you have an appropriate account.

If all else fails, don't forget you can contact me via the email address, but please be aware that, unlike the comments to this blog which I check every day, I don't monitor the email account associated with the blog on a daily basis.
Posted by Niblet at 23:25