Can it really be Cheeky Weekly's 85th issue already? Dick Millington draws the cover strip for the first (and only) time, depicting culinary comedy and agricultural antics plus the added bonus of an appearance by Arthur Fonzarelli (this is the second consecutive week that a celebrity has joined the mirthmakers on the front page).

Dick hands over the artwork duties to Frank McDiarmid as Sunday continues on page 2. There's a reference to last week's disco issue, and I like the photo on top of the TV showing Cheeky's dad in his army days.

In this week's episode of 6 Million Dollar Gran the synthetic senior citizen's creator, Professor Potts, has either forgotten that Gran is actually a robot or is covering in case her unguarded comment was overheard.

This week's Star Guest is Whizzer and Chips' comical canine, Paws, who first appeared in Krazy, the comic which also spawned our toothy pal.

The toothy funster finds the latest issue of the Mystery Comic secreted within the pages of his telephone directory. Either Frank McDiarmid knew which design of Mystery Comic cover would be used this week, or he made a lucky guess, but his depiction of the front page of the perplexing publication, featuring a title and background printed above the front page strip (rather than the type of cover on which the background surrounds the strip) matches that of the current issue...


The Mystery Comic's juvenile jinx, Disaster Des, brings this issue of the mystifying mag to a conclusion while learning that the show's not over until the fat lady falls through the woodwork.

No extraneous elements intrude upon The Mystery Comic this week, so there's a full complement of strips.

As we return to the Cheeky Weekly section and progress to page 22, we're met with the first ad for this year's Cheeky Summer Special - start saving up the requisite 40p for your helping of holiday humour.

There's abundant hill-arity on Saturday as Cheeky is inclined to take a hike. Please note this strip includes content that many today would consider inappropriate. 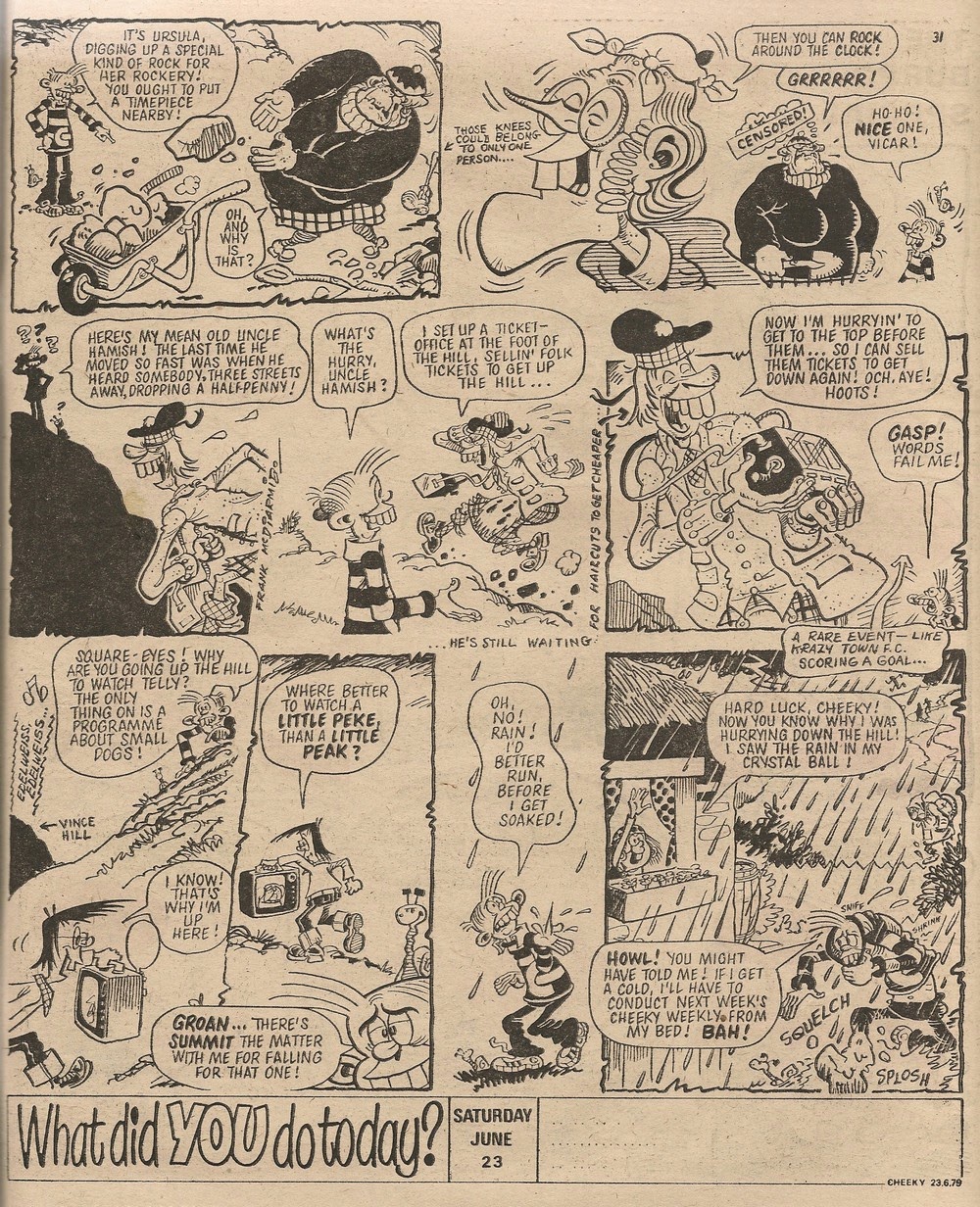 The Burpo Special brings this edition to a close. Crystal Belle is the subject of Burpo's interrogation, and there's an unexpected but typically calamitous intrusion by Bump-Bump Bernie. This penultimate Burpo Special is the final time Frank McDiarmid's art will appear on the feature.

9 of this week's 10 Cheeky's Week elements (among which I include The Burpo Special) are by Frank McDiarmid, with Dick Millington delivering the cover art.