Posh Claude makes his sixth cover appearance this week, as the butt of Cheeky's morning mirthmaking. Then it's the turn of front page veteran Manhole Man, appearing on the cover for the fifteenth time, to engage in pachyderm punnery with our toothy pal. Unfortunately, we can't read the full name of Cheeky's sunken sidekick's newspaper. The Sunday Subterranean? Sunday Sewer Servicer? MM's choice of Sunday reading is revealed on the cover of Cheeky Weekly dated 09 June 1979.

This edition coincides with week 6 of IPC's Star Guest promotion, and the current visitor (Cheeky's erstwhile Krazy co-star, now of Whizzer and Chips, the 12½ p Buytonic Boy) fetches up in the Cheeky Weekly section rather than the Mystery Comic as it has on 3 previous occasions. This week's Star Guest strip, including a brief introduction which fails to expand on the source of the pick-me-up powered Steve Ford's extraordinary abilities beyond what must be to the uninitiated, confusing, references to his Buytonic feats, can be seen here.

In the final panel on the Tuesday page, we witness one comedy superstar(?) paying homage to another as, in a nice touch by Frank McDiarmid, Cheeky gives us his creditable impersonation of Julius Henry Marx.

On Wednesday, thanks to the mesmeric influence of Hypno-Tessa, we get a glimpse of that most rare of Krazy Town events – a smiling Gloomy Glad (as can be seen here).

Later the same day Cheeky has an encounter with Louise who is planning to shred what she refers to as an “old comic”, and thus fashion some hair rollers. Our toothy pal realises that the funny paper in question is actually the latest Mystery Comic, so rescues it from such an ignominious fate.

There is a reciprocal, recursive comic appearance on the mysterious title's cover, as Tub happens upon a comic-within-a-comic-within-a-comic issue of Cheeky Weekly just prior to his fateful brush with yet another great comedy icon, that slapstick staple - the banana skin.

A full page ad within the Mystery Comic section whets readers' thirsts with a reminder that in 2 weeks, Cheeky Weekly will carry a free sachet of Kellogg's Two Shakes milkshake mix (as first publicised 2 weeks ago). The staggered nature of this promotion means those unwilling to wait can slake their craving now, as a packet of said raspberry-flavoured powder is affixed to the cover of this week's Whoopee! which is (not coincidentally) also presenting the first part of the Sports and Games Spotter Book.

We meet Mustapha Million's cousin Ahmed in this week's tale of the middle-eastern moneybags. Mustapha's mate Jimmy remains stoic despite losing his bike at the end of the story. 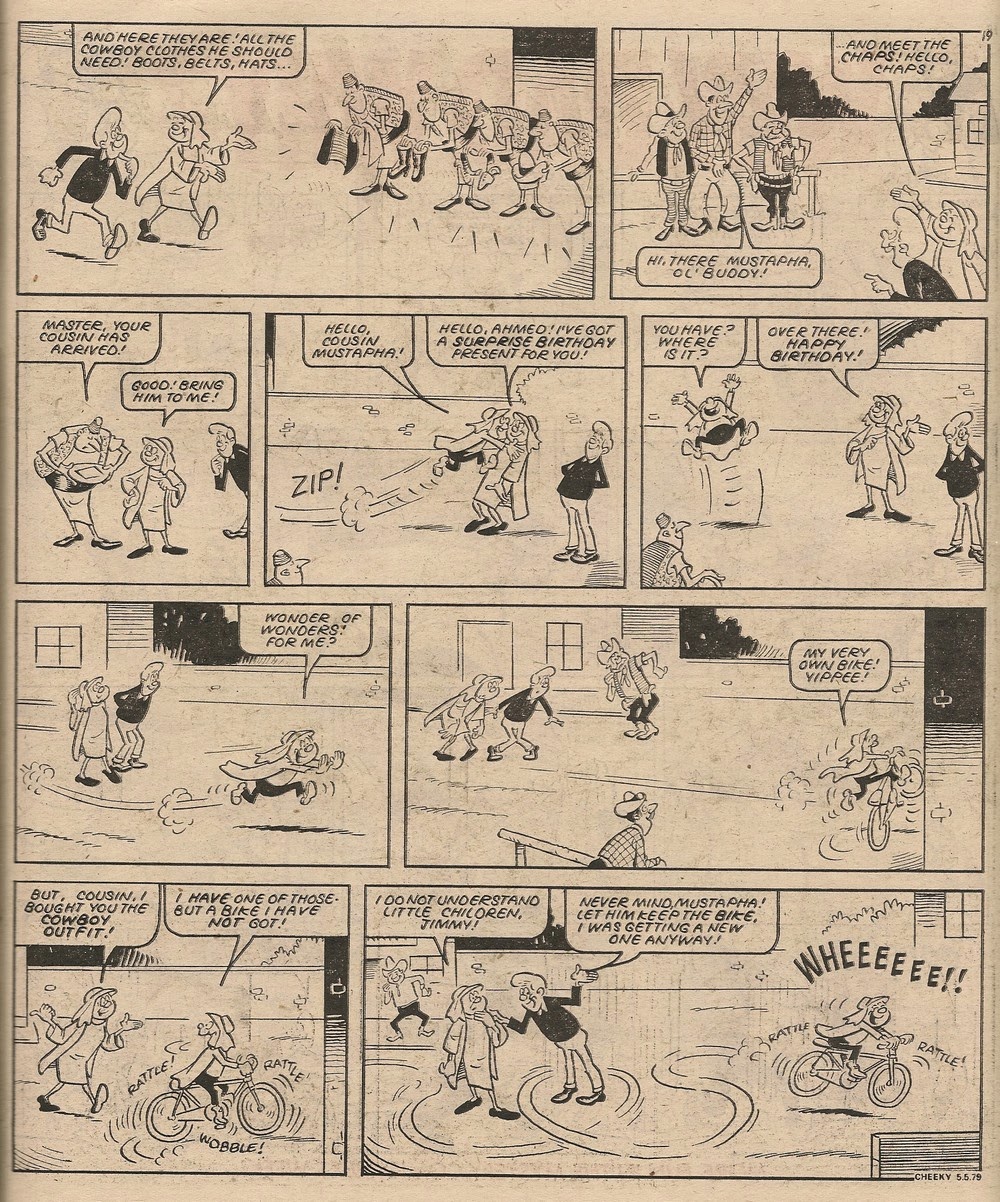 Disaster Des is absent from this week's Mystery Comic, and the apparent reason is revealed later on the Chit-Chat page...

IPC's latest entrant in the same category of comic as Cheeky Weekly (humour/adventure aimed at boys and girls), Jackpot, features on an ad occupying the whole of page 22. The similarities between the two titles didn't end there – both featured characters who had originated in earlier comics. In the case of Jackpot the inductee was inveterate participant in games of chance Jack Pott, who had first appeared in Cor!! although he didn't feature as prominently in Jackpot as Cheeky did in his own comic - note Jack is absent from this ad. 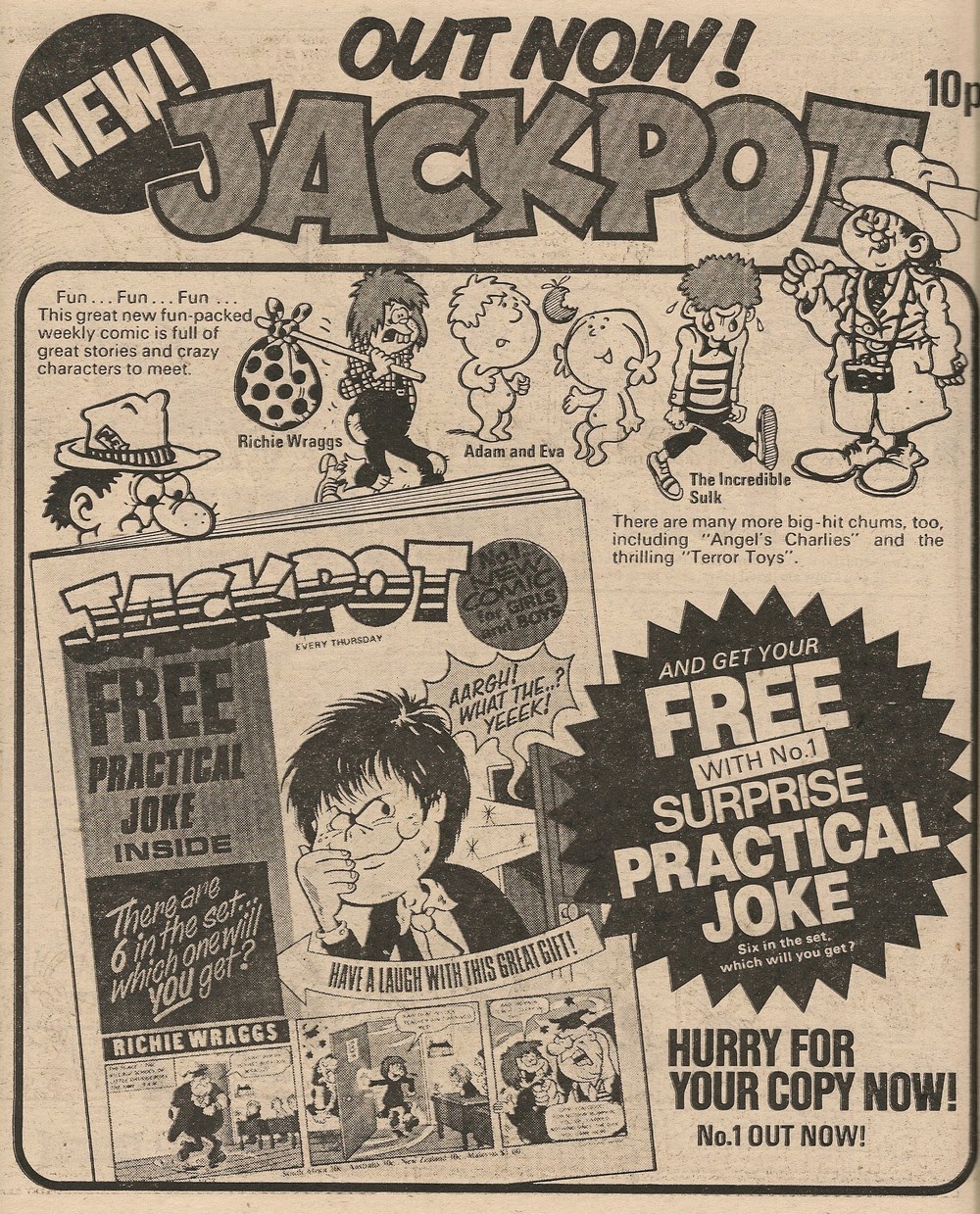 Despite Krazy's demise just over a year before this issue of Cheeky Weekly, IPC continued to publish Krazy Annuals and Holiday Specials. Phantoms of failed IPC titles in the form of Specials and Annuals would often manifest themselves on newsagents' shelves for some years after the weekly version had expired. The spectral metaphor is apt because these publications were often pale shades of the original comics, featuring ghosted art and strips exhumed from the catacombs of IPC in the form of reprints. Thus it was no surprise to readers of this copy of Cheeky Weekly to find an ad for the 1979 Krazy Holiday Special on page 29. Sharing the same location was news of that year's Frankie Stein Holiday Special. This wasn't a case of Special based on a resurrected title - Frankie was still appearing in Whoopee! at the time and there was never a Frankie Stein comic.

As has become customary in recent weeks, the comic concludes with a Burpo Special, and this episode echoes Tub's unfortunate experience a few pages earlier, as Teacher suffers a similarly slippery scene.


There's pure Frank McDiarmid art from Sunday to Saturday in this issue, with Mike Lacey doing the honours on the Burpo Special.