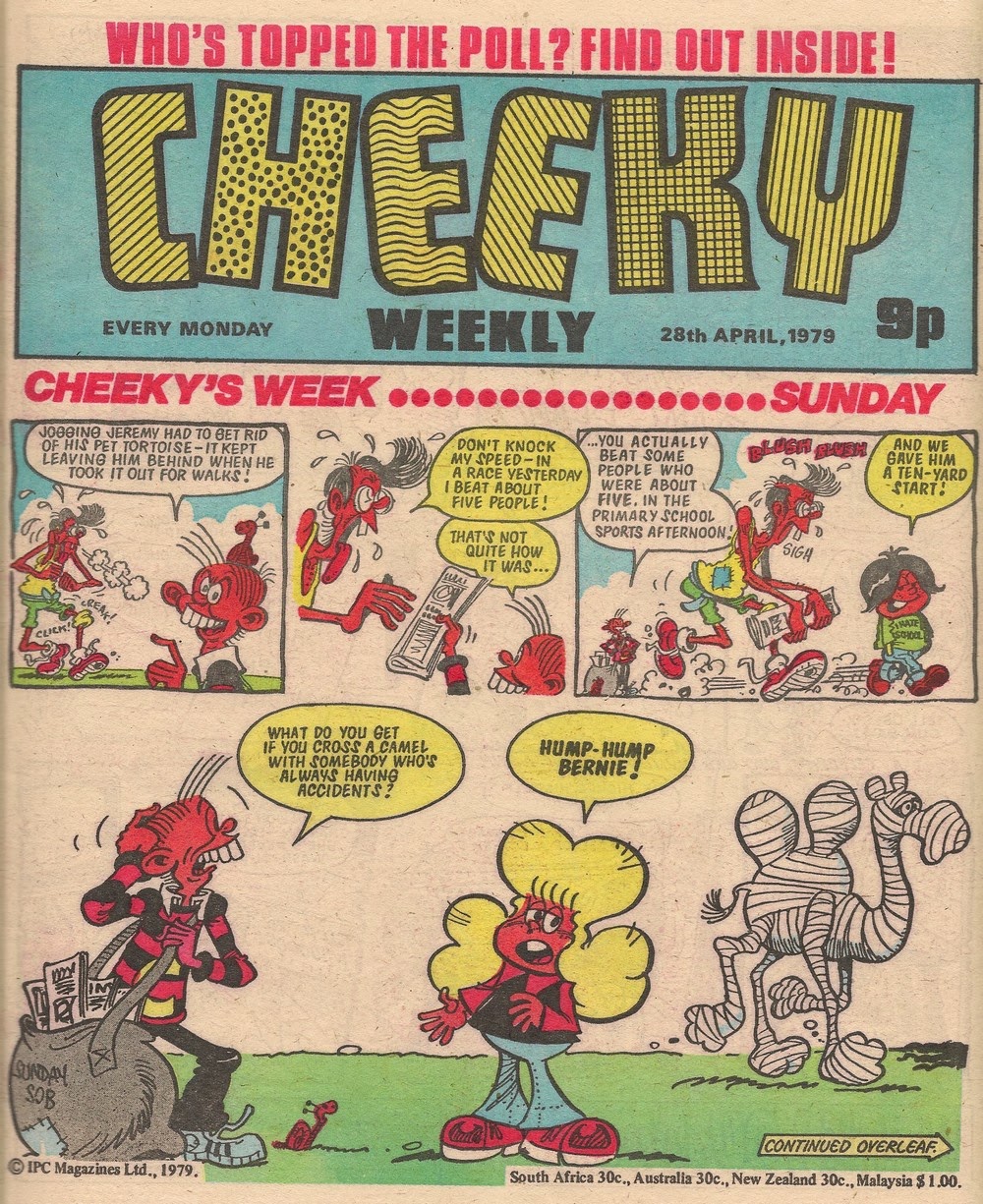 Unlike the two previous issues, there is a reference to the latest instalment of the Top Ten Poster on this week's cover, teasing readers over the identity of the celebrity voted most popular with readers of the toothy funster's comic.

6 Million Dollar Gran exhibits anger management issues when outraged at the price of chips in her story (again reduced to 2 pages due to pressure on space) this week. This isn't the first time the aged automaton has caused robotic ructions while shopping – the same counter-thumping behaviour was evident when she attempted to purchase a parrot in the 06 January 1979 issue. Maybe her electronic brain circuits require recalibrating. Nigel Edwards stands in for regular Gran artist Ian Knox for the eighth time, and coincidentally (or possibly not) Nigel also drew Gran's previous explosive outburst. 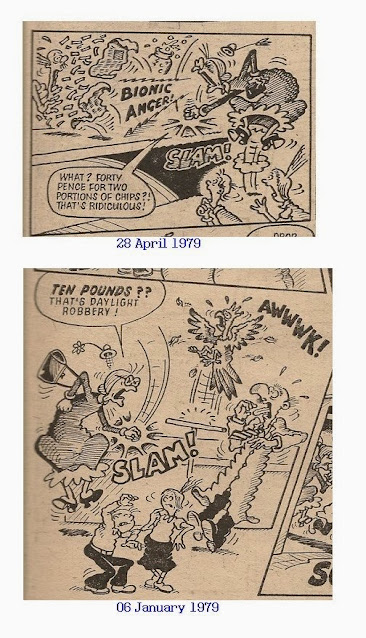 On Monday, in only her second appearance, Hypno-Tessa achieves an astounding feat of mesmerism.


This week's tea-based Calculator Kid tale ends on an atypically jarring note as Charlie seems a little unappreciative of his electronic pal's efforts.


The scene in the ticket office on Paddywack's page suggests that one of Cheeky's relatives has won the coveted title Miss British Rail.


It's been a while since one of Cheeky's pals has made multiple appearances in a single issue - Presto the Magic Rabbit appeared throughout Cheeky's Week in the 21 October 1978 first anniversary comic, but he's not a Cheeky's Week regular. The most recent instance of 'Cheeky's pal throughout the week' was in the 23 September 1978 issue wherein the recurring character was Crystal Belle. In the current issue Hid Kid is 'in evidence' (or at least as in evidence as the extremely bashful character ever is) every day except Friday. On Wednesday he bags first read of the Mystery Comic.

A crowd of  reward-seeking pursuers mistakes the captain of a ferry for the titular fugitive in Elephant on the Run. As the ferry sinks under the weight of the mob, we learn that a Cheeky Weekly reader has helped our pachyderm pal evade capture.

Star Guest intrudes upon the Mystery Comic pages for the third week running. This time the visitor is Whoopee's Scared-Stiff Sam, whose mum is attempting to engender in her petrified progeny an interest in athletics.

Also obtruding on the comic-within-a-comic is (as highlighted on the cover) the final part of the Top Ten Poster. So which celebrity received the most votes in the readers' poll? The winner, teeth gleaming out of the murk of a smudgily-printed black and white photo, is...John Travolta.

This week brings to an end a run of 4 consecutive 12-page Mystery Comics (the highest page counts to feature in TMC's 37-week run), coinciding with the Top Ten Poster promotion. Despite the extra pages, Mustapha Million has been bumped due to the presence of the concluding 2-page poster segment, Star Guest and 2 pages of IPC adverts (the first consisting of half-page ads, one for new title Jackpot - first issue coming next week - and the other pushing the Buster and Monster Fun Spring Special, plus another page devoted to the Kellogg's Two Shakes promotion starting in Buster this week – as mentioned in last week's Cheeky Weekly).

Cheeky's Week resumes with Thursday, whereupon Barrie Appleby takes over artwork duties from Frank McDiarmid for the remainder of the week (apart from a single panel and the Burpo Special). The different style of lettering in Jogging Jeremy's speech balloon in the final panel on that page, together with the appearance of a Frank McDiarmid rendition of the toothy funster, suggests the original closing panel has been changed (making this the fourth consecutive issue to feature such apparent modifications). It may be the case that the original final panel contained Cheeky's intro to the Skateboard Squad, who are absent this week perhaps to allow room for the aforementioned Star Guest.


On the Chit-Chat page, Cheeky tantalises readers with a cryptic reference to some 'new things' coming soon to Cheeky Weekly. Our grinning pal also makes mention of an upcoming gift, but we first learned about the forthcoming free sachet of milkshake in last week's issue. The Spotter Book he also mentions is presumably yet another in the tedious line of incessant cut-out booklets with which IPC plague their comic purchasers. 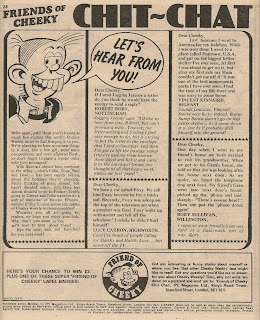 After a strenuous Saturday spent swapping gags with his pals, a famished Cheeky returns home for his mum's fish and chips.


Mike Lacey deputises on the back cover's Burpo Special focusing on this week's cover co-star, Jogging Jeremy, bringing another fun-packed issue to a conclusion.

This issue of Cheeky Weekly appeared in the episode of BBC TV's detective drama Shoestring aired on 04 November 1979.


Frank McDiarmid provides 5 Cheeky's Week elements, with Barrie Appleby delivering 4 and Mike Lacey giving us a Burpo Special for the third time. This is the last time Barrie will draw Thursday, Friday and Saturday but he will provide artwork in a further 3 issues.