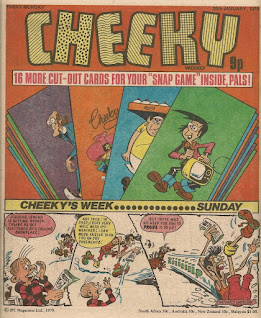 The second part of the cut-out snap game gets main billing on this week's cover. This promotion of the second part of the game is obviously intended as a reminder for those readers who bought last week's comic, since parts 2 to 4 will be useless to those who didn't buy the issue containing part 1.

In the Cheeky's Week…Sunday cover strip, an icy incident befalls Jogging Jeremy as he attempts a daring 'on-the-move' method of taking delivery of his Sunday paper.

The wintry theme continues inside, as we discover Krazy Town is suffering a cold snap. Spiv, always keen to exploit a sales opportunity, is peddling ready-made snowballs. Ten pence for 50 sounds a pretty good deal to me, although our toothy pal is less than impressed. Spiv is certainly impressed by Cheeky's well-aimed icy projectile as it impacts his kisser.


This week's snowy 6 Million Dollar Gran episode is reduced from the usual 3 pages to 2, possibly due to the presence in the comic of Steve Bell's maze (see below). In Gran's story there's a great panel showing the results of the Potts kids inviting all their pals to join them on their sledge. From an early 21st century multi-cultural viewpoint it's noticeable that all the faces are white but, to be fair, it would probably have been difficult to depict darker faces at this small size.

As is often the case, Gran foils a robbery during the course of the story, and earns a huge sack of cash as a reward. The generous synthetic senior citizen decides to buy sledges for all the kids, but by the final panel her magnanimity proves to have backfired, as not only does she still have to tow all the kids, but all their sledges as well.

This week's Calculator Kid story continues the snowy theme, and is a story that may possibly have been altered from a Christmas to a post-Christmas setting, if my theory here is correct. This would appear to be the first of two such altered strips in this issue - see below.

Page 8 is the location of a rather odd inclusion in this issue - it's a maze drawn by Steve Bell. Now there's no doubting that the artwork is very accomplished, but the way it's been used here has a distinct whiff of 'filler' about it (it's the first of 3 mazes by Steve that will feature in 3 consecutive issues). If this page had been produced specifically for Cheeky Weekly, surely it would have been based on characters from Cheeky's Week. It's not clear why this page was inserted at the cost of a page to Cheeky Weekly regular, Gran. The image of Cheeky looks like to me as though it's been pasted in. 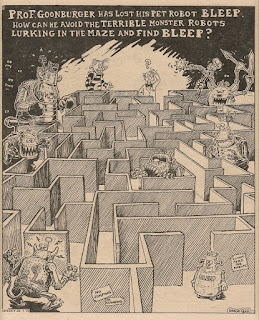 On page 21, Cheeky gives us an update on current state of polling for the Cheeky Weekly Top Ten Personality Chart. The toothy funster first solicited votes on this topic in the 18 November 1978 issue. The most popular personalities will be featured on an upcoming poster. 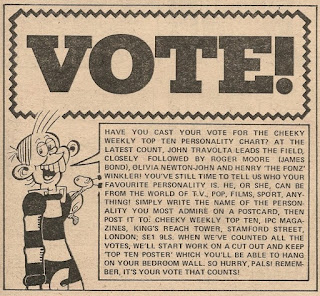 Cheeky's final comment above is a reference to a catchphrase used by the host of TV's Opportunity Knocks talent show, Hughie Green (see below at 1:47). The show had finished its ITV run the previous year, but would be revived by the BBC in the late 1980s.

While preparing this post I realised that this week's Disaster Des story could well be another strip that was originally intended for either the pre-Christmas or Christmas issues 1978 of Cheeky Weekly, both of which failed to be published due to industrial action. I have therefore updated my earlier post here to suggest that the Des strip was, like this week's Calculator Kid story, possibly altered to remove Christmas references.


Cheeky's icy week comes to an end on Saturday with a climactic snowball fight in which Louise seems to be the main target.


The comic reaches its customary (since 06 January, anyway) Pin-Up Pal conclusion on the back page. This week's poster features Disaster Des and is drawn by Des' usual artist, Mike Lacey - the first time Mike's work has featured in the Pin-Up Pal series.

The editor's edict that 'only one artist (or combination thereof in the case of Frank McDiarmid pencils) shall provide the Cheeky's Week elements in any issue, and furthermore, every other issue shall contain a Cheeky's Week featuring pure Frank McDiarmid art only' that seems to have been in effect since 30 September 1978's revamp issue (see analysis here), got disrupted somewhat as the comic emerged from the industrial troubles of December '78. As a result, this is the second consecutive all-pure-Frank issue (but no complaints from me, there), as Mr McD provides us with 10 crisp and frosty Cheeky's Week elements.

The snowy theme carries through the entire Cheeky's Week, but not all strips participate in the frosty frolics - Paddywack, Disaster Des, Elephant On The Run, the Eagle Eye and Mystery Boy reprints and The Burpo Special are all conspicuously lacking any sign of parky precipitation.

So was there any real-life snow in Britain in January 1979? This site suggests that London experienced heavy snow on 2 dates.