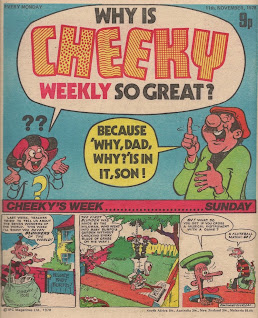 The lead characters from Why, Dad, Why? are featured on this week's main cover pic, in what appears to be artwork produced specially for the cover by the feature's regular artist, John K Geering. The comic's title is incorporated into Son's speech balloon. I like Dad's pontificating pose.

The Cheeky's Week…Sunday strip introduces a theme that will run throughout the issue, as the toothy funster presents the First Blunder of The World. Our grinning pal then enjoys a swift gag with Manhole Man, unaware that by the end of this issue he will have another manhole encounter which is not so agreeable.

The continuation of Sunday on page 2 features some excellent Frank McDiarmid artwork, especially Cheeky's Mum and Dad spinning in the wake of the toothy funster's dash to the TV - lovely. 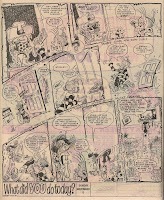 The Cheeky Annual 1979 is the subject of an ad on page 6, the third and final time this year's annual (dated one year ahead to extend its life on the newsagents' shelves beyond the end of the current year) will be advertised in Cheeky Weekly.


On the Monday page, we learn that the Second Blunder of The World was made by whoever it was that gave notoriously noisy nosher Crunching Chris a whole box of crisps for his birthday.

On page 8 this week's Joke-Box Jury panel are looking suitably amused by a selection of £2-winning gags. 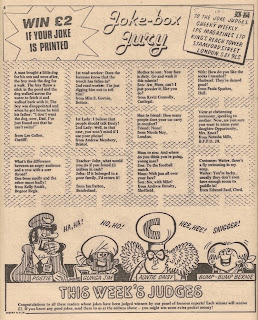 On Tuesday the perpetrator of the Third Blunder is revealed as mirthful mailman Postie, whose deliveries will be delayed as he has become stuck in freshly-laid quick-drying cement.

A rather familiar plot is in evidence on the Skateboard Squad page, as the intrepid trio again apprehend a thief who has made off with the takings, this time from a 24 Hour Laundry. The Squad had previously recovered the circus takings in the comic dated 18 February 1978, and 6 Million Dollar Gran retrieved the cinema takings in the 29 July 1978 issue.

Wednesday sees the Fourth Blunder - Bump-Bump Bernie taking a dive teeth-first into the pavement, after which Mechanic hands the toothy funster this week's copy of The Mystery Comic.

Inside TMC, there's televisual torment for the put-upon cover-star parent in Why, Dad, Why? 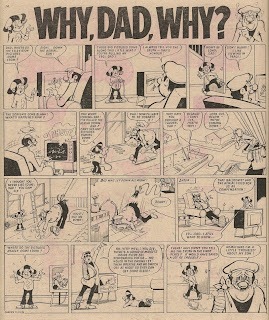 Thursday's blunderer is painter and decorator Willie Brushiton, who is stranded atop his ladder after painting it beneath him while climbing it.


Krazy Town's nutty knitter Granny Gumdrop and the giant ball of wool into which she has knitted herself, is Friday's Blunder of The World. The toothy funster himself becomes the seventh and final Blunder of The World on Saturday when he falls down an open manhole. Someone really SHOULD have a word with Manhole Man about leaving his aperture uncovered. 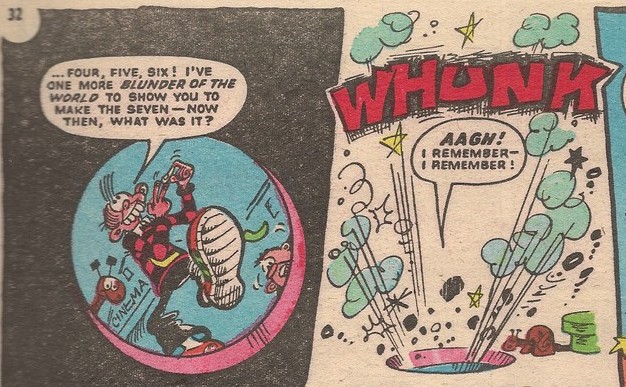 Emerging from his pavement plunge predicament, Cheeky's spirits are lifted as the comic rounds off with a Cheeky's Pal Puzzle posed by risible refuse remover, Sid the Street Sweeper.