This post updated 10 May 2022 - I originally stated that all except one of the versions of Why, Dad, Why? which appeared in the Cheeky titles were drawn by John Geering. I have since realised that in fact two Why, Dad, Why? episodes in the Cheeky Annual 1980 were drawn by an artist (the same person in both cases) who I'm unable to identify - one example can be seen below.

I am once again indebted to Stephen Archer who has researched the original run of Why, Dad, Why?, which commenced in Whizzer and Chips dated 03 October 1970 and concluded in the Whizzer and Chips Annual dated 1974 (published of course in the autumn of 1973). Fans of the toothy funster will be aware that a strip entitled Why, Dad, Why? began in Cheeky Weekly dated 30 September 1978 and continued (albeit absent from 16 issues) until the final edition of our grinning pal's comic, appearing thereafter in various Cheeky Annuals and Specials. However, these Cheeky versions of Why, Dad, Why? were not straight reprints of the original strips, but were redrawn interpretations of the scripts written for the first series. Manny Curtis drew the originals but the revivals of the feature were illustrated (with two exceptions) by John Geering.

With the help of Stephen's synopses of the plots of the original run of WDW, I have been able to link most of the Cheeky versions to their original counterparts.

The table below lists WDW's original run, and shows the scripts selected for reinterpretation in Cheeky titles (and also Why, Dad, Why? as Star Guest in Whoopee! and Whizzer and Chips)

The reinterpreted Why, Dad, Why? scripts did not adhere to the original publication order and were seemingly chosen at random, with the first episode not among those selected for re-drawing. The same abandonment of the original order and exclusion of the first episode became evident following Stephen's research into Ringer Dinger and the Cave Kids which were reprinted (in those cases featuring the original artwork) in the Cheeky titles..

Where the same synopsis is shown on 2 rows (such as Whizzer and Chips 17 July 1971), it indicates that the redrawn script covers 2 elements. The script that originally appeared in W&C dated 24 June 1972 was printed on one and a half pages in the Cheeky Holiday Special 1980, and the strip in the Cheeky Summer Special of 1979 was similarly split over a page and a half. All the other 2-row entries in the table indicate 2-full-page reprints. All the WDW strips in the Whizzer and Chips Annuals were 2-pagers, but none of those scripts were reprinted.

There is one instance of a synopsis appearing 3 times in the table below (Whizzer and Chips 04 December 1971), and I'll explain that after this table.

The script for the 04 December 1971 issue of Whizzer and Chips was utilised a further 2 times... 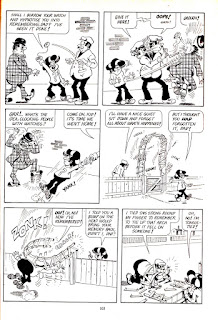 There are 3 Why, Dad, Why? episodes in the Cheeky titles that I have not been able to link back to an earlier script;

The episode begins with Dad and Son carrying a picnic hamper onto the beach. Dad says they need to keep the food cool, and Son puts the hamper into the sea. Then there's confusion over Dad's plan for a dip and his request to Son to buy a pair of trunks - Son returns carrying trunks of the luggage variety. The strip ends with the pair using the trunks as boats.

Son asks Dad why they must invite their relatives to Christmas dinner. The meal descends into a food-fight, but by the end of the evening everyone agrees they haven't enjoyed themselves as much for years.

Son asks Dad what UFO stands for, after which Dad has an altercation with a frisbee-throwing kid and his father, then our heroes witness a real UFO landing. The aliens abandon their invasion plans after suffering Son's incessant questioning.

It's possible that these 3 tales may be based on material originally appearing in Whizzer and Chips dated 21 August 1971 and/or Whizzer and Chips Holiday Special 1971, the 2 issues that have evaded our search. Please get in touch if you have the comics in question.