Cheeky fans perusing 1979's festive edition of Whizzer and Chips would have been gratified to see their toothy chum on the cover (as we saw in the first part of my examination of that issue), and were no doubt anticipating more Cheeky chuckles inside in his role as a member of the Krazy Gang, but maybe they wouldn't have expected to see him make an appearance in Super Store.

A rather intoxicated-looking Cheeky attends the Super Store slap-up feed and, unlike the cover scene, the whole Krazy Gang are in attendance (Store artist Bob Hill is familiar with the Gang's mugs since he's also the artist for their strip).

Among the gathered diners enjoying the festive feast is Steve Ford who was absent from the cover, as well as the full cast of Happy Families who were somewhat depleted on the front page. As well the current stars of the comic, the ever-generous Uncle Rich has invited along a few comic celebs from days gone by. Can you name all the characters in the final panel? There are three whose names elude me - the character wearing a ruff and seated between Chip-ite and Willoughby, the face that can barely be seen above the table between Willoughby and Shiner, and the lad between Shiner and Bewitched Belinda. UPDATE - See Stephen Archer's comment below. There also seems to be a disembodied hand gripping a glass of pop (or maybe something stronger if Cheeky's apparent condition is anything to go by) that's floating above Nobby's party hat. I was a bit confused by Benny 'Lazy' Bones, from whose bonce a rather alarming punk-style hairdo seems to have erupted, but then I realised that it's another example of festive headgear. Pongo Snodgrass is absent. UPDATE - No he's not!

Our toothy pal gets to enjoy a further slap-up nosh at the Krazy Gang's hut in their story. 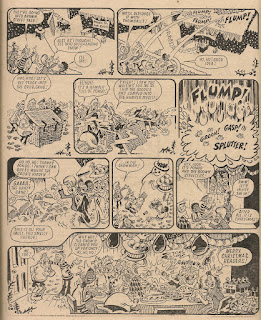 Pongo endures a second 'clean-up' this issue (see link above for his first wash), and the tale pleasingly resolves with seasonal goodwill all round. I can only echo Liz's sentiments - Merry Christmas, Readers!