A week after Mustapha Million was the subject of the unwelcome attentions of the Bumpkin Billionaires, the other Cheeky Weekly survivor of the time was unwitting host to an impudent invader of Whizz-kid origin.

Can you identify the intruder upon Charlie Counter and his silicon-chipped sidekick? Scroll down, where enlightenment will be forthcoming…

Yes, it's the rather dull Animalad strolling nonchalantly into the boys' lavs, carrying out his third raid on an ex-Cheeky Weekly character. He has previously intruded upon Cheeky (as a member of The Krazy Gang), and gatecrashed Mustapha Million. However the Whizz-kid shape-shifter was himself the victim of a retaliatory incursion by Mustapha.

This Calculator Kid strip had first appeared in Cheeky Weekly dated 03 February 1979 (the 'big' issue). The superimposition of Animalad wasn't the only change to the page on its Whizzer and Chips outing – the trajectory of an unidentifiable object ricocheting off a kid's head in the first panel on row 2 was obliterated, Cheeky's graffito under the handbasin (row 3 panel 2) was removed while in the same panel Charlie's closing word was excised, and a change was made to Charlie's dialogue in the final panel. This last change was probably made because the original didn't make sense, since during the story Charlie didn't actually 'interfere with [Calc's] plans'. 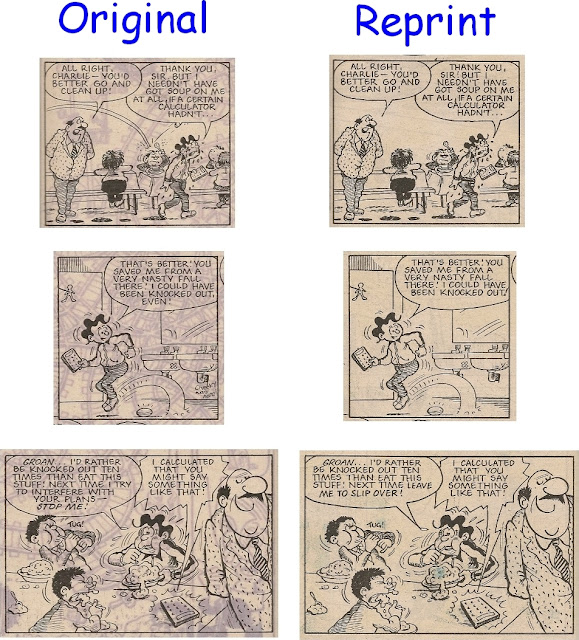 This was the seventh raid carried out on Calculator Kid up to this point, making Charlie the most-raided ex-Cheeky Weekly character. The dwindling survivors of the toothy funster's title had by this time suffered 18 raids and perpetrated 9.