By the time of the next raid involving one of our ex-Cheeky Weekly chums, Mustapha Million's run of reprints had ceased, and new adventures of the middle-eastern moneybags were being drawn by Barry Glennard. But can you spot the intruder (or maybe there's more than one) in this story? Scroll down, where all will be revealed. 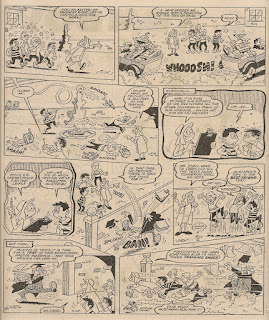 Yes Mustapha, always entirely comfortable with his wealth, was subjected to a multi-panel raid by the Bumpkin Billionaires, who strove vainly every week to jettison their unwelcome fortune and return to 'the simple loife'. Maybe the affluent agriculturalists were hoping to stash their cash in amongst the wads of moolah sloshing around in Mustapha Mansion.

This is the first time that the Bumpkins en masse have staged a raid on our plucky pals - Pa raided Cheeky (as part of The Krazy Gang) in the 13 July 1985 issue.

By this stage the Cheeky survivors had suffered 17 raids but had perpetrated 9. More raiding fun soon!