You know how this works by now - see if you can spot the intruder in this strip. The identity of the plucky raider will be revealed if you scroll down... 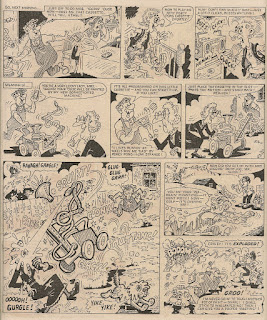 Yes, two weeks after being the victims of a raid by Odd-Ball, resilient Charlie and Calc mounted a revenge sortie across the border into Whizzer, targeting newcomer Master P Brain. Cliff Brown's strip featuring the juvenile boffin had commenced in the aforementioned 15 March 1986 issue wherein Calculator Kid's story was infiltrated by the rubbery red rascal.

At this point the tally of raids involving ex-Cheeky Weekly characters since the incorporation of Whoopee into Whizzer and Chips as of April 1985 was as follows;

Despite the welcome hint of a reversal of fortunes with this latest raid, there's still a way to go to redress the balance, and with only two Cheeky-related fun pals surviving at this juncture, it's going to be a struggle to reach parity, let alone triumph. But don't get disheartened, as there will be more raiding fun soon!