One month after Calculator Kid's story was infiltrated by Benny 'Lazy' Bones, poor old Charlie Counter and his number-crunching pal were subjected once again to the unwanted attentions of a wily Whizz-kid raider. Can you spot the intruder (and no, it's not the opportunist mouse in the final panel)? Scroll down for the answer. 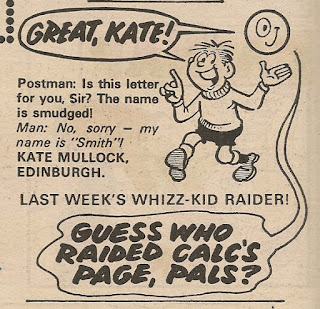 Once again a raid has been perpetrated by that rubbery alien sphere, Odd-Ball.

This Calculator Kid episode is revealing, as we learn that Calc doesn't always act in Charlie's best interests, since the sentient silicon chip is aware that the directions he is giving his pal will culminate in dental distress.

This is the sixth time Calculator Kid has been subjected to a raid, and the fourth time that Odd-Ball has impinged on the doings of Charlie and Calc. This raid is the 16th carried out on our ex Cheeky Weekly chums, who have carried out 8 cross-border sorties into Whizzer.