All art in this post is by the mighty Frank McDiarmid unless noted otherwise.

Cheeky's Dad first appeared as a distant silhouette hefting a hod of bricks up a ladder in Krazy dated 23 October 1976. This bout of hard graft evidently didn't suit the toothy funster's similarly be-choppered pa, as he wasn't seen again until the first issue of Cheeky Weekly a year later.

Cheeky's Dad's anti-comic sentiments prompted our hero to visit the attic wherein lay his father's clandestine collection of funny papers. Our grinning pal then presented Cheeky Weekly readers with a page from among his old man's hoard of humour, in an un-named feature that I dubbed Old Comic. This Cheeky's-Dad-disparaging-comics-and-Cheeky-heading-to-the-attic sequence of events became the regular introduction to Old Comic. Despite his declared antipathy to comics, it was clear Cheeky senior wasn't averse to immersing himself in the funny papers he ostensibly bought for his son.

Cheeky was lucky enough to read more than one IPC title... Dad would sometimes apprehend his offspring in the attic, requiring some quick-thinking on the part of our toothy chum. 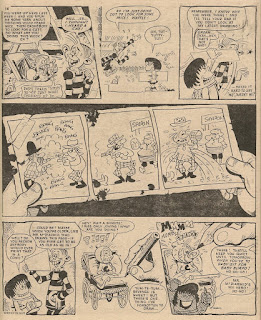 As can be seen above, aspiring artist Doodle Doug manipulated the Cheeky vs Dad comics vendetta to his advantage.

The first of Dad's cover appearances occurred on the front of Cheeky Weekly dated 03 December 1977 and scant weeks later he was again drafted into front cover gag duty for the 14 January 1978 edition.

Dad developed a secondary role as of that 14 January 1978 comic, whereby each Sunday evening he and Mum would be the victims of Cheeky's latest scheme to circumvent the 'early to bed ready for school tomorrow' house rule in order to watch the latest TV episode of 6 Million Dollar Gran. However, when Mum was out, it became evident that Dad was also a secret Gran fan, as he joined Cheeky in watching the adventures of the synthetic senior citizen.

The 24 June 1978 issue saw Dad make another cover appearance, yet again the victim of one of his son's unlimited supply of gags, and on the cover of the comic dated 15 July 1978, the joke really was (well, almost) corny.

During the 1978 summer holidays, Dad announced that the family were off on a surprise canal barge holiday, and he consequently appeared on 4 separate days during Cheeky's week, sporting a rather fetching nautical look in which a peaked cap replaced the flat variety he customarily wore.

Dad's (and Mum's) customary Sunday evening appearances were brought to an end when the Sunday evening feature was dropped from Cheeky's Week as of 30 September 1978. However, as Cheeky explained in that same issue, “They're putting [6 Million Dollar Gran] on in the middle of the day now!”, so Cheeky's parents continued to be on view as the toothy funster partook of Gran's mid-day screenings (although the shunt forward in transmission times meant there was no further need for subterfuge on Cheeky's part to secure a place in front of the TV).

Cheeky's pater was clearly getting a taste for the front cover, his toothy mug appearing there again on the 13 January 1979 comic as the Cheeky clan prepared to welcome the new year. During the party, Dad's deft about-turn concerning his son's bedtime prevented the premature conclusion of festivities. He was rewarded in a way that upset Mum – for the full story see here.


Cheeky senior's real moment in the spotlight came in 20 January 1979's Burpo Special. But even the investigative skills of Burpo couldn't prise the truth from devious Dad, although erstwhile Krazy readers would have been aware of the true occupation of Cheeky's old man. 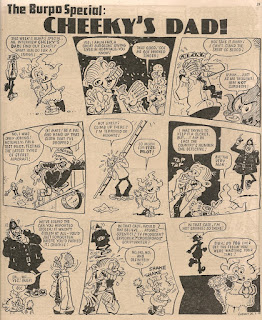 However, we did learn of Pa's military past - having witnessed Dad's aversion to any form of exertion we must assume this was a period of National Service - thanks to a photo atop the TV in the comic dated 23 June 1979... 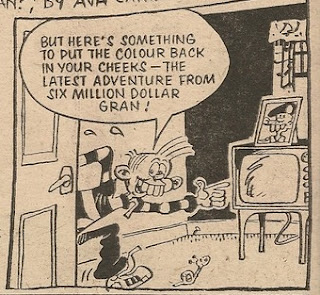 Cheeky Weekly dated 18 August 1979 saw the first of Dad's eight cameo appearances in the Snail of the Century strip, which centred on the back garden adventures of Cheeky's slithering sidekick, but always started and ended with the mirthful mollusc observing events chez Cheeky.

As Cheeky Weekly entered its final months, appearances by Cheeky's Dad became less frequent. However, he did turn up on 4 pages in the 29 December 1979 Christmas issue (3 Cheeky's Week pages as Mum threw Cheeky and Dad out of the house while she prepared a celebratory lunch for the toothy funster and his pals, and a Snail of the Century). The following week our grinning chum's pater featured on 2 pages (once for the Cheeky household's annual new year bash, then again in Snail of the Century).

The final time Cheeky's Dad appeared in the comic was a Snail of the Century cameo in the concluding issue, dated 02 February 1980. This brought to 73 the total editions in which Dad appeared.