Cheeky is joined on this week's cover by Doctor Braincell for horological hi-jinks drawn by Dick Millington.

Dick's contribution to this issue of Cheeky Weekly continues on page 2 where Cheeky is so preoccupied with gag-delivery that he parts with only one Sunday newspaper. 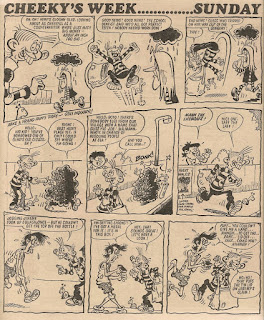 This week's is a classic 6 Million Dollar Gran strip, with some enjoyably surreal images from the mind of Ian Knox, as Gran encounters a surly scout master. It's evident from the rather sparse area at the right of the final panel that the strip was originally drawn with the Cheeky-watching-TV-conclusion, but the artwork has been altered to conform to the new 'no framing devices' editorial policy that was implemented as of the 07 July 1979 'new look' issue. 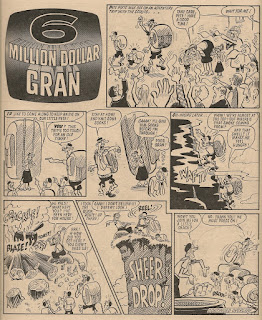 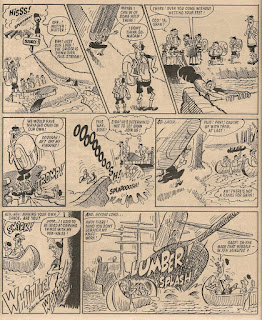 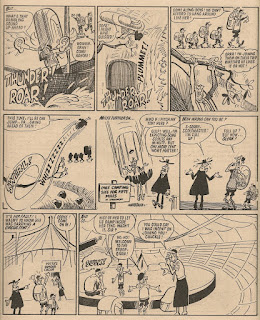 On Monday Dick Millington seems to base one of his depictions of the toothy funster on a distinctive pose that Frank McDiarmid was evidently so pleased with that he drew it 3 times in the 21 April 1979 issue...

The concluding panel of this week's The Gang suggests to me that it may have been the final episode of the strip's original run in Whizzer and Chips. Thanks to Raven for confirming in the comment below that it was in fact the last Double Deckers episode. 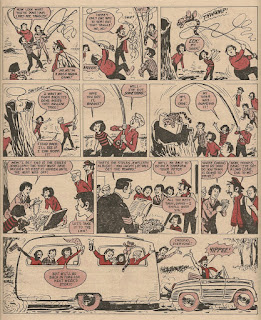 Speaking of conclusions, this is the 18th and final week of IPC's 1979 Star Guest promotion, and Bookworm is the last guest to pay a visit, with a rather atypical story in which Whoopee's bibliophile buddy spends most of the strip unconscious and subsequently exhibits symptoms of concussion. Not a very good choice of script for promotional purposes I would suggest.

On Friday Dick Millington includes a reference to his Cheeky Weekly colleague (I made this as large as possible but you'll still have to click on it to see the relevant detail)...

Cheeky's Week concludes with a Saturday spent at Doodle Doug's art class, and the comic rounds off with Snail of the Century in colour on the back cover.

Dick Millington supplies all of Cheeky's Sunday to Saturday strips, with Frank McDiarmid delivering Snail of the Century. This is the last time Dick will draw Thursday, Friday and Saturday, but he will supply artwork in one more edition of Cheeky Weekly.