Following the previous raid involving an ex-Cheeky Weekly character, there was a break of 3 issues before one of our pals from the toothy funster's comic was again entangled in the murky world of cross-comic infiltration. In fact it was Calculator Kid, who had been the victim of the raid documented in the link above, who was once again targeted by the Whizz-Kids. See if you can spot the culprit in this story of Charlie being let out of school by a teacher to wander around town (wouldn't be allowed today), then scroll down for the answer...

... as with the raid covered in the previous post in this series, this was a Bave-on-Bave incursion, the interloper this time being Toy Boy.

Our Cheeky Weekly pals are now falling rather behind, having suffered 5 raids while perpetrating only 3.


Since falling victim to his previous raid, Calculator Kid had reverted to reprints of his Cheeky Weekly adventures. The one used above originated in the special Cheeky Weekly dated 31 March 1979. The original first panel looked like this... 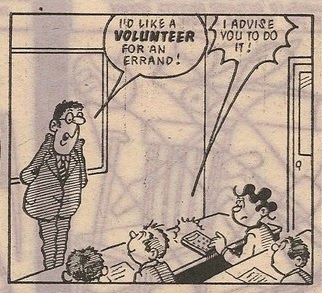