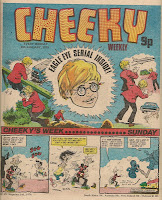 Glumly entering the newsagents in the full expectation that Cheeky Weekly will be absent from the counter for a fourth week running, Friends of Cheeky all over the country (and possibly beyond) are delighted to spy a neat little pile of their favourite title awaiting them. What a great start to 1979!

Had publication not been interrupted, this would have been the New Year issue of Cheeky Weekly. There is usually a small area at the bottom of each page reading 'CHEEKY DD.MM.YY', the date being the cover date of the issue in which the page appears.  The fact that there are no dates on the pages of this edition suggests to me that this is a 'standby' issue, compiled in order that the publishers had something ready to send to the printers at short notice, as soon as they were aware that the industrial dispute had come to an end. Since the Cheeky Weekly editor had no way of knowing how long the strike would last, he chose to omit the dates from the pages, and to make this standby issue non-specific in terms of the time of year depicted therein. For the same reason, the date sections in all the What Did YOU Do Today? Diary areas on the Cheeky's Week pages are blank.

The New Year issue was published the week after this issue appeared.

The cover makes no reference to the missed issues, instead a new strip is announced; Eagle Eye joins the Cheeky Weekly gang this week. Veteran consumers of IPC product may be less than thrilled at this announcement, as they will be aware that Eagle Eye is in fact a reprint from Shiver and Shake, 1973. In the grand tradition of Cheeky Weekly covers which promote adventure strips, the Eagle Eye art is lifted from the debut story inside. Below the announcement, Cheeky shares a joke with arthritic athlete Jogging Jeremy.

At the top of page 2 is an acknowledgement of the interruption to publishing. 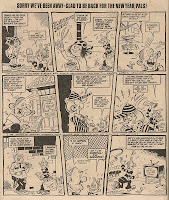 Nigel Edwards does the art honours on this week's 6 Million Dollar Gran episode, deputising for regular artist Ian Knox for the 5th time since the series began. This week, Gran and the Potts children visit the pet shop with the intention of purchasing a parrot. Outraged on learning that their colourful feathered mimic of choice has an exorbitant price tag of ten pounds, Gran slams the counter and launches the bird through the door, into the street. A parrot-chase ensues, and on spotting the terrified avian cowering among the leaves of a tree, Gran unleashes a mighty blast from her synthetic lungs. This powerful puff (incorrectly labelled a Bionic Blast on the page - Gran is a robot) not only uproots and defoliates the parrot's arboreal haven, but divests the frightened bird of its feathers. Surprisingly, the plucked polly retains the power of flight. In a further plot twist, Gran inadvertently allows a felon to escape arrest, but by the end of the story not only is said miscreant delivered into the long arm of the law, but the parrot is miraculously re-feathered. 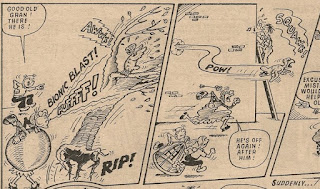 For readers like myself, who aren't fans of IPC's incessant 'cut out and keep' promotions, there's ominous news on page 11; Cheeky Weekly will be featuring the first part of a snap game next week. Readers of stablemate titles Whizzer and Chips (with Krazy) and Whoopee! will find their comics similarly blighted over the next four weeks. 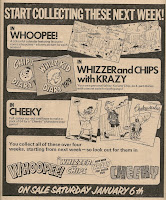 Milkie is the source of Cheeky's copy of The Mystery Comic this week - it seems someone left it in a milk bottle instead of their milk order. The unfortunate customer's milk shortage is our good fortune, as we get a classic, totally bonkers Elephant On The Run tale in the centre pages of the mysterious publication. 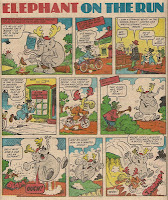 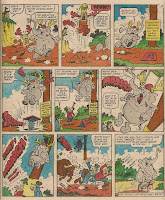 The inaugural instalment of cover star Eagle Eye's adventure (as far as Cheeky Weekly is concerned, anyway) appears on pages 26 and 27, and ends on a cliff-hanger as young Tommy Trotter (he with the vision of the bird of prey) stumbles upon a bullion robbery.

The issue rounds off with a treat for all Elephant fans, as the peripatetic pachyderm is the subject of this week's Pin-Up Pal poster on the back page.

We say farewell to one of the more obscure inhabitants of Krazy Town this issue - this is the final appearance of the time-travelling phone box.